Regi Bernard and Samuel Tanner were teenage sweethearts, but were driven apart for more than two decades, but at last they are together again. Sam’s baptism is to take place one day and their wedding the next. All is in preparation. Only Sam doesn’t show up for his baptism. It appears he has run from commitment, but in fact he has been kidnapped by a powerful Alaskan tribe who plan to hold him for trial on trumped up charges concerning a long ago murder. 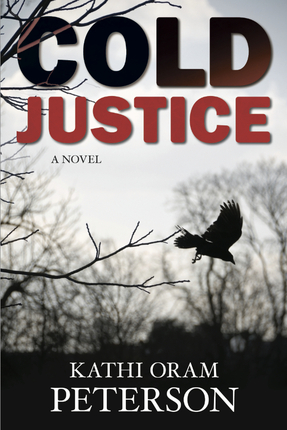 Cold Justice by Kathi Oram Peterson starts on an eerie note and is filled with one action scene after another as Regi deals with her doubts concerning Sam’s disappearance and begins a fast paced pursuit to find his captors and rescue him. Accompanied by her sister and a strange white woman who pretends to be Native American, they begin their journey from Northern Idaho to Alaska by car, then take to the air. Meanwhile Sam finds himself in serious jeopardy, drugged, and bound. His only protection seems to be his growing faith in God and his own stubborn determination to survive. The local Idaho sheriff doesn’t approve of the three women’s quest, but he too, is determined to find justice for Sam and sets his own plan into action.

Superstition, greed, and revenge play a large role in the charges leveled against Sam and it takes all of the courage and ingenuity Regi can muster to outwit the plot carefully set in place to destroy Sam and steal what is rightfully his. In the process she learns a great deal about her friend and sister as well as Sam she hadn’t known before. She also learns about her own faith and commitment to Sam and to God.

Most of the major characters in this book were first introduced in an earlier book, River Whispers, however other than using the same characters, there’s little connection between that book and this one. There is more character growth seen in this book than in the first one as the major characters come to terms with their own strengths and weaknesses in resolving their issues and as they learn of the abilities and tragedies that have shaped their friends’ and families’ lives.

The tremendous strides Regi and Sam make in their personal growth is more than matched by an exciting plot and rapid action. The varied locations and cultural differences add a distinct air of mystery to the plot. The tribal beliefs and practices enhance the suspenseful nature of the story and lend an element of the unknown. The fast pace makes the book difficult to set down. Readers who enjoy action-packed suspense set in remote wilderness areas will find much to enjoy in Cold Justice.

Kathi Oram Peterson, an Idaho native, attended the University of Utah where she earned a BA in English. She and her husband are the parents of three adult children. She has worked in the publishing field most of her adult life as an editor and writer of children’s stories. This is her fifth full length novel written for an adult audience.