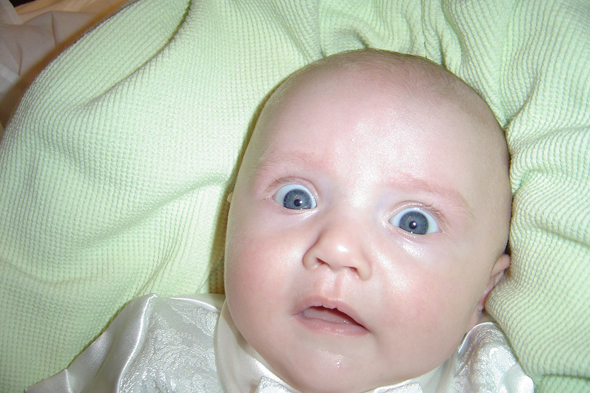 You want to name me what?!

When it comes to naming a child, no two people will ever agree on the same list of excellent names. What one person thinks is fabulous their spouse will find ghastly, and couples are often surprised that their soul mate has an entirely different idea of appropriate monikers for the new arrival.One of you will have dreamed of naming the child after your angel mother and that will turn out to be the name of your spouse’s greatest enemy all through high school.

Thus couples scour books and ancestry charts, credits of movies, even street maps. And they finally come up with the very best name they can agree upon. In-laws, friends, and possibly the child himself may cringe, but most parents do their best to assign a noble name that will wear well through the life time of their offspring.

Popular names go in waves, and many couples pick trendy names ofthe current maternity crowd. Thus, if a woman named Peggy moves into your ward, you can bet she’s in her 50s or 60s, but definitely not in her 80s, and not in her 20s. She comes from the same decade as the Marilyn‘s, Barbara‘s, Carol‘s, Shirley‘s, Margarets, and Bonnies.

My parents were a bit older than average when I was adopted, and thus I was given the name Joan, a name really belonging to that crowd– women a generation ahead of me. It meant I would be the only Joni in my peer group, which actually worked out fine and eliminated the duplication I would have encountered had I been one of the many Lisa‘s, Julie‘s, Linda‘s, or Debbie‘s of my own era.

Remember the 70s and 80s? Little boys born then were often named Michael, Christopher, Jason, Eric and Brian. And the girls were commonly named Jennifer, Amy, Melissa, Michelle, and Sarah. Of course, these babies then grew up and are having babies of their own, eagerly embracing the current trend toward Aiden, Jackson, Mason, Liam, Jacob, Ethan, and Noah for the boys, and Emma, Sophia, Chloe, Olivia, Ava, and Madison for the girls.

But despite our best efforts, a hurricane, an infamous mistress, or a political buffoon comes along with your child’s name and your best intentions are dashed against rocks. Heard of any baby Monica‘s or Katrina‘s lately?  There’s really no way to insure against crazy nicknames, either. You can carefully choose a name without blemish and your kid will get called “Stinky” for years, all because of a gaseous moment in the 3rd grade.

We named our third son Cassidy, a name you might think belongs only to females today. But when we chose it 23 years ago, there were no girl Cassidy‘s. Our obstetrician had insisted we were having a tiny little girl and we were all set to honor Bob’s grandma, Cassandra, with a new Cassandra we would call Cassie. Out came a nearly ten-pound boy, and though we tried out various other names, looking at him to see if he fit “Christian” or “Parker,” it was only the variation, “Cassidy,” that made him smile. So we went with it. And then, five years later, TV host Kathie Lee Gifford named her new baby girl Cassidy. The name caught on for girls and we spent years explaining to doctors’ offices and school personnel that Cassidy is a boy. Today he’s a 6’3″ man who jokes about it, feels fine with it, and goes by “Cass” occasionally.

It’s tough to find a boy’s name that won’t someday be usurped as a girl’s name. Taylor, Cameron, Jordan, Whitney, Charlie, Blake, Courtney, Leslie, Madison, Ashley, Morgan-they all began as boys’ names. Short of naming your son Clyde or Elmer, you take the chance that almost any name you give your son could suddenly be a female celebrity name, and forever feminine in the eyes of the general public. Although I think my husband is safe with Bob, as long as he doesn’t start going by Bobby.

Still, there are a few guidelines I’d like to share that can at least reduce the odds of disaster. First, don’t get overly creative with the spelling. Creativity is a grand thing. I lecture about it, I believe in it, and “creative” is the trait my two eldest sons chose when asked to describe me in one word to a newspaper reporter. But it’s like seasoning-a little goes a long way. And it’s probably best used in the arts or in problem solving, not in devising offbeat spellings of otherwise fine names. Chloe is a beautiful name, but if you put “Klowey” on her birth certificate, your child will have to spell it a zillion times for every person she meets. Even unusual names are fine, but stick with tradition when it comes to spelling. (And if your name is Lindzee or Jorja please do not write and say it’s been worth every second of explanation. I still say it’s an unnecessary inconvenience-for both parties).

Run it together to see how it looks online, in this computer age. Do you really want the word SEWER to leap out visually whenJesse and Werther are put together to form jessewerther? Likewise, if your last name is Lyman don’t name your son Doug. It will become douglyman with “ugly man” popping out to the reader’s eye. This is no time for carelessness, so check the initials as well. I know a girl whose initials spell GAG and a fellow whose initials spell DUM. Not a kind trick to play on an innocent baby.

And speaking of tricks, stay away from joke names. This may seem obvious, but why do we keep hearing about Saran Rapp, Ima and Ura Hogg of Texas, I. Rob Banks, and Formica Dinette? Just because a song says a boy named Sue was all the stronger for it, don’t give in to the rhyming name, the silly name, or the famous criminal name. It’s hard enough to get ahead in life without having a name that works against you.

Honoring relatives is a lovely idea. But, after staring at genealogy charts until my eyes crossed and I had to start all over, I do wish my dad’s side hadn’t gone James-John-James-John-James-John for so many generations. Bob and I decided to honor his brother Ken, by inserting his name into the middle names of our last two children (Nicole’s middle name is McKenzie, for example).

Years later Ken said he had always hated the name “Kenneth,” so it turned out we were actually honoring Bob’s mother’s idea of a good name, not something his brother was particularly thrilled with.

For LDS families, I think it’s a good idea to be particularly careful about using family names for the middle name.Sometimes an ancestor with an odd name gets honored this way, the parents thinking no one will ever really know their kid’s middle name is Shangri-La. But think how many times that child will be ordained or set apart, every single name being spoken. You don’t want your child to wince with embarrassment at these sacred times (or any time).

And I, for one, wish moms would relax about their favorite name being “taken” by a sibling or an in-law.

There can easily be cousins who share the same first name. Your child will have his or her own identity, a different last name, a different peer group, and will probably live in another state someday. There’s no harm in sticking with the name you really like.

Giving all your kids a name that starts with the same letter is simply a matter of personal choice. I know several families with J names or K names, and while it’s a bit tough for outsiders to keep things sorted out, it does give a nod to family solidarity. However, if you have a large brood, things can get pretty desperate as you run out of choices for H or W, and some other difficult letters. Don’t pick the extremely dated Hortense or Wilma simply because it has the right letter (my apologies to any babies out there actually named Hortense or Wilma).

Watch out for names that could belong to a neighbor’s dog. Not only does it open up your child to teasing, but those names generally lack the sophistication you’d like to see on the office door of the CEO. Lest I get mail from people defending their parents’ choices of Sparky or Shadow, I won’t provide a long list here. But scan the online lists of popular pet names before you lock in your choice, just to be sure.

I once saw a woman with an unfortunate, unattractive name (trust me) interviewed on television. The host commented on what an unusual name it was and the woman had to jump in and say, “It means loved by all,” or some such thing. Don’t give your child a name because it means something no one else will ever look up or care about.

And this brings me to the specific topic of LDS names. I love them. I feel a warm stirring in my heart whenever I meet a little baby named Dallin or McKay. Why not make a list of all the names of modern-day prophets and apostles, and think about naming your child Kimball, Joseph, Hunter, Holland, Quentin or Grant? First or last names, whichever one jumps out at you. It’s such a great legacy for them to keep in mind as they study that man’s life.

I also like Book of Mormon names. How can you not be an automatic missionary when people ask the origin of a name like Ammon or Nephi? There are great women’s names in there, as well, and wonderful female names from our church history (Emma being one of the most popular little girl names today). Biblical names are also superb, and stand the test of time (my family’s James-John list attesting to this fact).

It’s a heavy responsibility to name a child, and I sympathize with young couples who choose not to share their choice (and tolerate the wrinkled-nose reactions of their relatives) until it’s a done deal. But with prayerful consideration, common sense, and just enough creativity to give your child a sense of individual identity, parents can ace this one.

That is, until a daughter named Lacy marries a man by the last name of Stocking, or another daughter, Kenya, marries and becomes the question, Kenya Cook. You’ve seen the unfortunate pairings: Emma Royd, Anita Bath, Shanda Lear. You just have to hope and pray they choose someone with a name that doesn’t spell disaster. And even then, blessedly, it’s out of your hands.