For Dear Flavio or Life Betrayed

I knew that the first three weeks of the year were going to be stressful. Fall semester when I agreed to do two shows simultaneously that had performance dates one weekend apart, I knew that that meant they’d be elevating and getting more time consuming at the same time, and that both directors would slap the word mandatory’ on their rehearsals at the same time that I ran out of hours in the day and energy in my limbs to do both things. Up until the first show opened and closed, I was in rehearsal from 7pm to 1am each night, and I actually survived pretty well (though I’d be lying if I said I didn’t miss a class or two during the insanity).

The first show I committed to, and the one that also performed first, was Flavio Betrayed: A Commedia del’Arte Scenario. It had no script, merely masked characters that we were to learn well enough to know how they’d react in any situation, and a loosely-applied plot line. Despite the whining that escaped from me in response to that show, it turned out to be kind of enjoyable. By the time it had ended, and I was solely slaving away for the other show, I began to miss the latex smell from the inside of the mask that meant I was playing old Pantalone, a lethargic man obsessed with the bottom line. 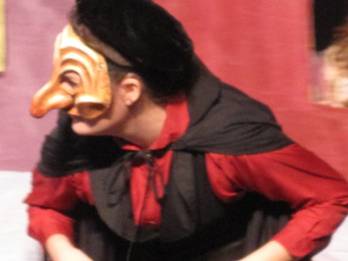 The other show was a piece of naturalism with a clearly-laid out script, where we essentially wore our own clothes and interacted within this family dynamic as you really would under natural circumstances. Between these two shows, it sounds so much harder to have the pressure of improvising the entire show versus having cues and lines and a clearly laid-out structure for how it should all go down. Yet, I’ve found that it is easier to play something far from yourself, then to have the pressure of using your own voice and your own face.

For Dear Life may have been a little too close to reality in lots of ways (and not just because I spilled pie down my shirt on stage which I have absolutely done in real life). I play a younger sister who bites in the way that Mariah would bite if she ever had to. I’m afraid the snarky sarcasm that unfortunately comes pretty natural to me is making the character a little one-note, and I’m trying to figure out why it is that I haven’t pushed farther and dug deeper. I don’t know if I just didn’t put in the right preparation, or if the process wasn’t conducive to my optimum growth, or if I’m just afraid.

Because For Dear Life is a student written, student directed platform piece, we get to have a little talk-back with the audience after each show to see what they thought of the experience. I love hearing all of the symbolism that they interpreted in our production that was completely unintentional on our part. The play takes place at Thanksgiving and the first night everyone kept commenting on how the table never got completely cleared, and how that was indicative of this family and their issues, being moved around, but never resolved.

I feel like that, my issues continue to feel moved around and not resolved. Even bringing up my feeling of not so much inadequacy, but not-as-good-as-I-know-I-can-be, with this character, with no intention of answering the question. Lots of people expressed dissatisfaction with the way the second play ended, Flavio ended with everyone ending up with the person they were supposed to, and every knot and bow cleanly tied off. For Dear Life ended with no relationship enlightened or resolved and the central conflict as stubbornly in place as it ever was. But for this slice of life, it’s ok and maybe I should take that to heart. Perhaps for my slice of life now, it is ok that I can’t figure everything out and things feel unresolved. The best times of my life have yet to be lived. (I read that in fortune cookie once, sounded like it would feel good to believe).