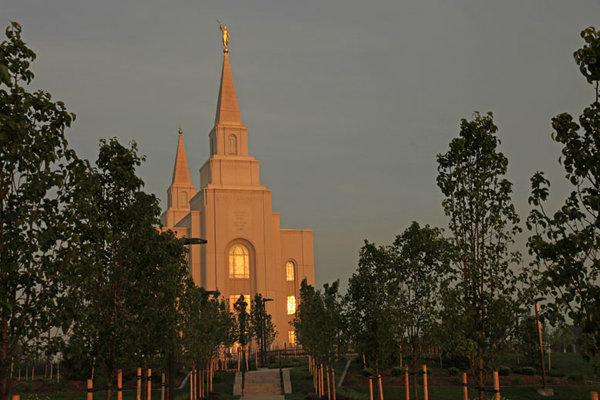 The photographs in this essay were taken by Scot Facer Proctor.  Text by Maurine Proctor.  The Kansas City Temple dedication took place Sunday, May 6, 2012.

Every temple dedication is remarkable, but this weekend the dedication of the Kansas City Missouri Temple was particularly stunning because of what it represents.

Missouri was a place for the Latter-day Saints in 1838 of particular pain.  Driven out of Jackson County, some of them barefoot in winter, they settled again in Caldwell and Davies County in a land set apart by the legislature with a no-man land’s buffer between them and other Missourians.  Finally, the Mormons had to flee the state for their lives with Governor Bogg’s Extermination Order on their heads.

The contrast today couldn’t have been more marked.  Many wondered aloud if Joseph, Hyrum, Brigham and others who had known those former scenes  weren’t rejoicing in heaven to see this day when as a sign of the maturing of the Church in Missouri, a beautiful temple stands upon a prominence, and 90,000 people who attended the open house, came away with an enhanced understanding of who we are and what we believe.

In the next week, Meridian will be featuring several photo essays and cover stories taking you to the dedication and the unique people who are members of the Church in Missouri, where once Mormons were rejected.  Today we begin by showing you photos of the building itself, taken at first light the day before the dedication.

To capture these photos, Scot, had only about 20 minutes of morning’s fresh light, where every outline is edged in a glow. Sunrise was scheduled at 6:15 the day these pictures were shot, but with low-lying haziness, the light that makes magical photographs didn’t arrive for 30 extra minutes.  Thus, time was short–perhaps only 15 minutes to capture what Scot found here, and he spent those minutes running, pausing only to shoot. He says it was exhilarating.