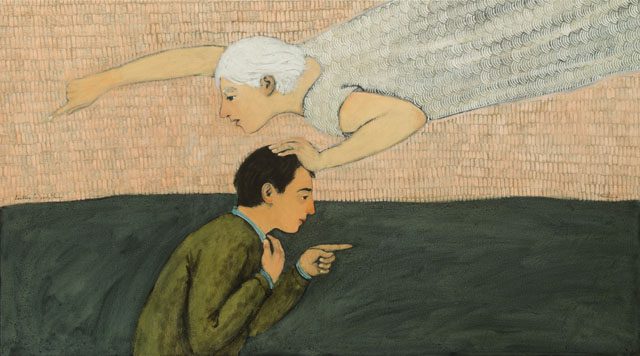 Cover image: “Looking for something,” by Brian T. Kershisnik, 2016. Used with permission.

From time to time God allows His angels to inform us of things that we could otherwise not know. They have abundant access to information and sometimes have permission to communicate it with us in some way.[1]  I’d like to share five profound experiences where angels have brought knowledge and understanding through voice, thought [2] or sight to those who were ready to listen…

“You Don’t Belong Here”
Haven Bouton had life-changing knowledge and direction conveyed to her by an angel.  She reports,

“I joined the church with my family when I was 15 years old. Prior to our lessons with the missionaries, my family and I attended different churches, trying to find where we belonged.
“When I was 14, my mother and I attended a local church service and while we stood during a musical performance, I felt the intense presence of someone behind me in the aisle, but when I looked nobody was there. Clear as day I heard a voice say, “You do not belong here!”  This repeated a few times more. I could feel the overwhelming presence of the angel through the rest of the service. I never went back there again and in a matter of months we were talking to the missionaries. When I attended my first sacrament meeting, I felt like I had finally arrived home. I knew that I belonged there, and I was grateful for the guidance of that angel to help me find truth.”[3]

Bringing truth and light is one of the assignments of angels.[4]  They are instrumental in helping many people find the Gospel.

Miraculous Intercession
Amelia Segi shared with me a story of a remarkable conversion that was instigated by an angel.  Her parents had been Ward Missionary leaders in her San Francisco 3rd Ward, Tongan Stake, and they often took her “tracting” with the missionaries.   She writes,

“On one of these ‘tracting’ undertakings, my father walked up and knocked on the door of a house. Nobody answered the door, so he started to walk away.  Suddenly, a man ran up to the side gate and yelled out “Wait! Wait, I’ve been waiting for you all day. The man told me you will be coming today!”

Amelia’s father was puzzled and asked the man to explain what he meant.  The man began to cry as he told them his story.  She continues,

had been injured at his job and couldn’t work.  He felt useless at home and became very depressed. He started to become an alcoholic and he was slowly starting to lose his family. He told us that the night before we came he was so drunk his family had left him.

“He said that he woke up on his kitchen floor to a bright light standing over him telling him that my father and missionaries would be stopping by to save him and that he should listen to them.

“He couldn’t stop weeping while telling us the story. My father, mother, my siblings and I, and the 4 missionaries also started to cry. He said it was shortly after this bright light went away that he heard the knock. He was so weak, but he kept yelling out ‘I’m here.’ He crawled all the way outside and that’s when he was able to stand up and yell out to my father.

“My family went on to help him by spending every day with him until he started to feel bright and happy again.  His life began to change.  After a month or so, this man, his wife, and four kids were baptized, and we were all blessed through the process.”[5]

Amelia’s family harvested blessings that were brought by an angel of God. Angels can bring knowledge and blessings in many forms.

Best Friend Returns from Grave to Inform and Comfort

Robert Cowart shared a touching experience that happened to his family.

On August 12, 2020 his wife of 53 years passed away and his son-in-law started calling family members on the phone about 45 minutes later to inform them of the death.

Robert tells what happened then.  He explains,

“My son Stephen grew up in Savannah, Georgia and became lifelong friends with a boy down the road from us named Rob Hernandez.  Rob had married and had two small children but contracted cancer and died 2 years ago.  Before he died, Rob extracted a promise from my son Steven to look after his wife and children, which he has done religiously.

“Within moments of my wife’s death, Stephen was out walking with his wife Amy.  He suddenly stopped and said to her, ‘Amy, Rob just spoke to me and told me Mom has passed.  He told me not to worry, because he will take care of her.’

When my son-in-law called him a few minutes later to report the death, Stephen revealed that he already knew she was gone.”[6]

The knowledge Rob brought from beyond the veil was strengthening and supportive to the entire family.

“Should an angel converse with you, neither you nor he would be confined to corporeal sight or sound in order to communicate. For there is that spiritual process described by the Prophet Joseph Smith by which pure intelligence can flow into our minds and by which we can know what we need to know without either the effort of study or the passage of time, because that is revelation.”[7]

Sometimes angels are directed to reveal pure intelligence to our minds.  Nothing is more enlightening or edifying than that flow of revelation…

Angel Brings the Gift of Language to A Discouraged Missionary

Many years ago, there was a missionary who was struggling with German while on his mission.  It was a source of great frustration and seriously interfered with his ability to serve the people in Germany.

He went to a little grove of trees nearby and prayed with all his heart, pleading with the Lord to help him.  While there, an unusual thing happened.  His mother, who was dead, was allowed to appear and to have a long conversation with him.  He related the aftermath of that beautiful experience:

“…Thus, two or more hours were spent together, by far the most memorable of my whole life.  Mother said she knew I was having a hard time with the German language and asked me to meet her at the grove again the next day at the same hour as she also wanted to be helpful to me in this.  She explained that I would not see her again just as I saw her that day, as this personal appearance and visitation was by a special and divine appointment.  Then my mother disappeared exactly as she had come – almost unperceived.

“The next appointment was sacredly kept,… This time I could not behold her person nor hear her voice just as I had done on the preceding day, but there seemed to be just as divine a presence and an unquestionably clear conversation under a much higher law than we could possibly enjoy in our communications with each other here.  We understood and exchanged thoughts more rapidly, clearly and satisfactorily than is possible with human voices, for there was no worry about what to say and just how to say it to be properly and clearly understood.

“Exactly all that took place on this occasion, I do not remember, but I do know that something did transpire whereby I was able from that time to easily understand, to read and even write this new language (German) and in a most surprising manner to myself and those with whom I came in contact.”[8]

I love the process and principles by which angelic revelation can flow.

In this last poignant story, an angel brings revelation in a very unusual way.

Carola A. Strauss relates an extraordinary experience of how the appearance of a Catholic priest aided her grandmother, Anna Maria Theresia Lormess Fischer in becoming a member of the church.  This account took place in Hernkaschuetz, Germany in the late 1890’s.

“Anna Maria had always been extremely inquisitive about her church and its doctrine. She spent many hours talking to her priest in an attempt to understand and resolve in her own mind who God was, and what the purpose of life was, etc. She never felt satisfied with what she was told and always felt that something was missing. Anna Maria was especially concerned with what happens to us when we die.  In fact, that is what she and her priest discussed during her last visit with him.

“One morning, just prior to dawn, as Anna Maria was waking up, there appeared before her, her Catholic priest — he was holding a book. As he approached her, he held the book up and pointed to it. It was titled ‘Das Buch Mormon’ (the Book of Mormon). The priest said nothing to her; he simply continued to point to the book and then he disappeared.

“Confused, bewildered, and baffled by what had just taken place, she got out of bed, then set out to visit her priest so she could share with him her strange experience or dream.

“Upon reaching the church, she quickly learned of the untimely death of the priest. He had suddenly passed away earlier that week. My grandmother was thoroughly confused, to say the least.  She was convinced that she needed to find this mysterious book . . . she just knew it would provide her with some important answers to this entire puzzle.

“Although her attempts to locate the book seemed an exercise in futility, Anna Maria remained determined — she never stopped searching or hoping to find ‘the Book.’ A number of years as well as World War I passed by and then one day she found it… in an outdoor garbage can! She also tracked down the missionaries herself.

As she read through the Book of Mormon’s pages, she found the answers to so many of the questions that had for so long perplexed her. She also now understood why her priest had appeared to her. He must have discovered the truth himself and wanted to make sure that she found it too!”[9]

The departed priest’s newly acquired level of light and knowledge must have qualified him for that angelic errand. He wanted to share his new understandings with Anna Maria, because he knew how much she sought truth.

As these stories illustrate, angels operate at a higher level of light than we comprehend and can transfer that life-changing knowledge to us in amazing ways. Angels can bring truth; comfort or even a new skill to move us forward on the path God wants us to be on.

[4] Doctrine and Covenants 20:35, “revelations … come hereafter by … ministering of angels,”

Moroni 7:25, “Wherefore, by the ministering of angels, and by every word which proceeded forth out of the mouth of God, men began to exercise faith in Christ;”