An Apostle’s Lesson to the Singles of Britain | Meridian Magazine 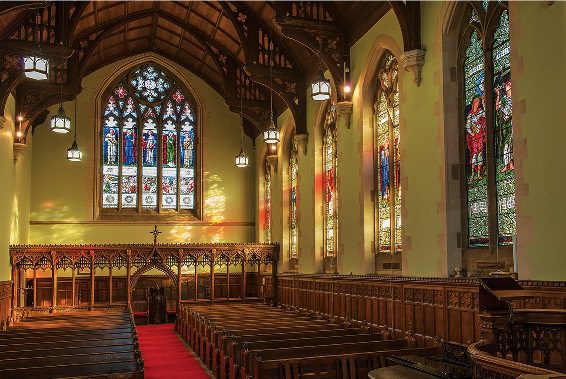 An Apostle’s Lesson to the Singles of Britain

At the far end of the chapel in Harris Manchester College of Oxford is an enormous stained glass window. The bottom half depicts in vivid color, four of the apostles of Jesus Christ. A smile grew on my face as I realized that another, living apostle of Jesus Christ was soon to address us in front of that very window. Elder Jeffrey R. Holland has the same authority and mantel as they did. The craftsman who designed those windows capturing apostolic faces would never have guessed that they would one day be the backdrop to the face of a real, modern day apostle. He chose not to stand behind a pulpit or even to use a microphone. Instead he came down among the pews and spoke with us like his friends as he moved up and down the aisle.

Those that speculated that he would talk about marriage found immediately that they were wrong. He instead began to describe the times in which we live. The greatest dispensation in the history of the world and the only dispensation that has been asked to give the Church back to the Lamb in the end. So what will it mean to have lived at this time?

It will mean standing up.

The Church’s destiny is sure, but it is up to us as individuals to make our own paths as sure. Elder Holland told of a pair of obscure missionaries in the early days of the Church whose names we’d never heard, whose stories seem hardly worth telling. They left their wives and their families to serve. 36 months of rejection and persecution and hunger and disappointment and only two baptisms to show for it. Two baptisms that didn’t seem like much of a triumph at all, converts by the names of Brigham Young and Heber C. Kimball.

He talked too of Andrew, an apostle from the New Testament that we hardly hear about. We know little of his ministry, but we do know that he was one of the first to hear Jesus teach. He believed on the words of Jesus and wanted to follow him, but first he wanted to tell the things he had heard to his brother. His brother was Simon Peter.

These individuals didn’t shy away from sharing the truth and they never knew what far reaching effect it would have. Elder Holland addressed the British Parliament this week—likely the first LDS person to do so—and he told us we were the reason they thought to invite him. It is through knowing personally the goodness of regular Mormons, that Members of Parliament are assured that Mormons might have something to say. He told us that, “Whether you’re in a great office or small or no office at all, you should never be reluctant to stand up.”

Though he assured us that we live in “terrific times,” he also said (with prophetic authority) that standing up for truth may someday mean that we stand alone. It may mean foregoing opportunities for popularity and applause. But someone else was left alone in His greatest hour of grief and taught us how we are to deal with it. We stand, stay the course, finish the work which the Lord would have us do.

I’ve learned something from Elder Holland’s visit to the United Kingdom that he may not have even intended to teach. At the opening of both addresses (a Sunday regional conference and a Thursday fireside), he took the opportunity to acknowledge the contribution of every individual that preceded him in the meeting. He thanked them by name, referred back to their talks and their prayers in specific detail. He never gave any indication that he considered himself the most important part of the meeting. Watching him, I’ve begun to understood what humility really means.

But humility is also a confidence that does not back down. He did not give himself airs, but nor did he give a single moment’s timidity or hesitation in declaring the truthfulness of the Gospel with all the power and conviction of any person I’ve ever heard speak. He talked of those that leave the Church over an intellectual disagreement or an issue with church history and struck the room to silence when he said suddenly, “Don’t you dare turn your back on this Gospel and its principles. Turn your back on that and you’re turning your back on the Atonement.”

The chapel was silent. And in that silence he added his last testimony ‘that this IS God’s truth’–a truth he is sure of on his honor and over his grave. No one could have possibly left wondering how he really felt. He stood up boldly, ready and willing to be counted, with all the conviction and authority and love of who he is and what he knows.

He cried from the watchtower that soon we will have to stand up, and then he showed us how.

I was inspired and strengthened both by Elder Holland's words, and by the way you relayed them. Thank you, Mariah! I too felt as if I'd been there.

Thank you Mariah. I felt like I was there and you wrote a beautiful article about a beautiful person.