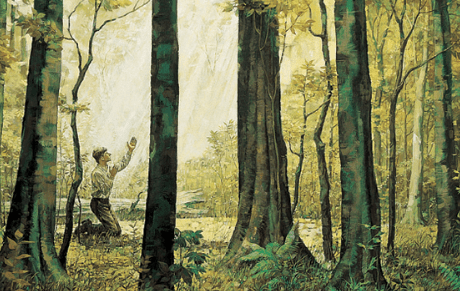 There are four firsthand accounts of the First Vision, produced in 1832, 1835, 1838, and 1842. The Joseph Smith Papers project has published images of these documents, along with English transcripts, and translations intoChinese, French, German, Italian, Japanese, Korean, Portuguese, Russian, andSpanish.

Each of these firsthand accounts was related by Joseph Smith at different times in his life, under different circumstances, and for different audiences. The accounts vary in detail, offering different perspectives of the same event, but relate an overall consistent story.

A detailed explanation of each of the accounts can be found on the Gospel Topics essay page “First Vision Accounts” on LDS.org.

Accounts of the First Vision by Joseph Smith

JS History, ca. Summer 1832, pp. 1–3. This is the earliest and most personal account, and the only one that includes Joseph Smith’s own handwriting.

This is the most widely-known account that is published in Joseph Smith—History in the Pearl of Great Price. This account began what was to become a six-volume history of Joseph’s life. It was copied by scribes into a large bound volume and was later canonized in the Pearl of Great Price. It has long been translated into many languages and distributed throughout the world in pamphlets and with the Church’s standard works.

JS, “Church History,” Times and Seasons, 1 Mar. 1842, 3:706–707. This brief history of the Church, often referred to as the “Wentworth letter,” was prepared at the request of a Chicago newspaper editor. The extent of Joseph Smith’s involvement in writing it is not known, but it was published with his signature. This account borrowed language from Orson Pratt’s A[n] Interesting Account of Several Remarkable Visions.

Accounts of the First Vision by Others

This page in the Joseph Smith Papers project also list five other accounts written by contemporaries who heard Joseph Smith speak about the vision.

In the video below, “Joseph Smith and the First Vision,” we are reminded that studying all the accounts of the First Vision can give us a greater understanding of this important event.