A Sacrament Meeting Worth Shouting About | Meridian Magazine 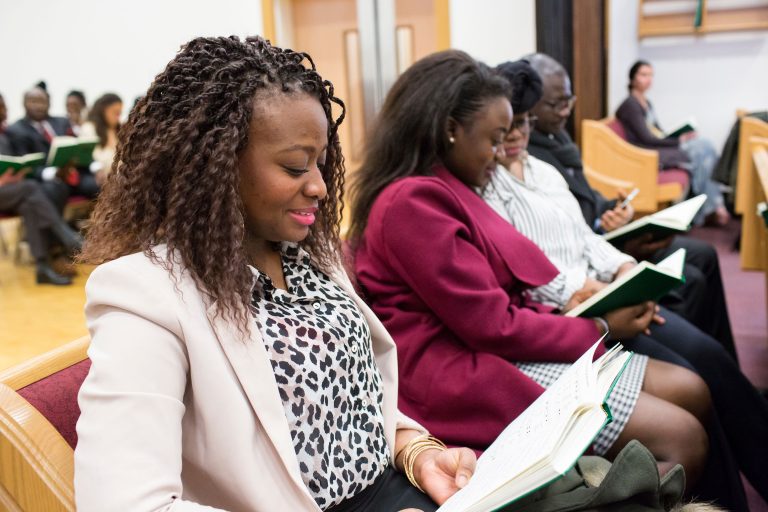 A Sacrament Meeting Worth Shouting About

Sunday turned out to be one of the most exciting sacrament meetings I can recall. It was exciting because a wonderful young lady, a 16-year-old who came to America as a refugee from the chaos in the Democratic Republic of the Congo, stood at the pulpit to give her first talk and touched the entire congregation. It was especially exciting because she gave the talk in Swahili, with my wife at her side giving the English, allowing our many Swahili speakers to finally hear a talk in a language they can understand. (I almost said “in their language,” but that would be a mistake. For those coming from the Congo, Burundi, or Rwanda, it’s their second, third, or fourth language. One of my new friends from Africa told me after sacrament meeting that he speaks 10 languages.) I wasn’t the only one excited by her talk. When she finished, there was a loud cheer from the pew behind me that filled the chapel with the joyous voice of her proud mother, celebrating her daughter’s accomplishment. I clapped very quietly to join her mother in celebration.

My wife and I helped our young friend to write her talk a couple of weeks earlier. She told her story in English as I typed. We edited it down and then practiced the Saturday before. We felt having my wife at her side could help her face the great fear she had about speaking to a large group of people, and by going one sentence at a time, English first and then Swahili, it could help her and the audience. I was very proud of my wife and her loving influence on this young lady, and especially proud of my wife when she supplied a couple of Swahili words when the girl stumbled (e.g., the difficult word for “saints,” watakatifu).

Our friend told the story of being just 9 years old when the family had to suddenly flee with almost nothing in order to escape the growing danger in their homeland. She told of crossing a dangerous border at night to evade the Congolese authorities that would force them back into the Congo, and of having to split up into small groups, apart from her father and other family members, not sure if they would ever see each other again. Once into Uganda, there were new dangers and hardships. Her father was able to resist those who wanted to split the reunited family and send them to two different refugee camps. They were blessed by the kindness of a stranger on a motorcycle who helped them find friendly police and even went out of his way to bring back food for the family. Kind Ugandan police even cooked breakfast for them. So many challenges had to be overcome, but they eventually were brought to the United States as refugees, and I am so grateful for the many people who have shown kindness and love to this large family, both in Maryland and now Wisconsin.

She told the story of how her family began to seek God more earnestly in their lives. They attended several churches but she was confused by the differing teachings. Then a relative told them about Appleton, where he had also found a church he liked. They moved here and began attending the Appleton Second Ward. But when the missionaries challenged them to be baptized, she said no, even though others said yes, because she had heard that Americans baptize by just getting your head wet in a little bathtub, but she wanted to be baptized like Jesus, by immersion (kwa kuzamishwa). But after learning that that’s how we do it, and after gaining a testimony of the Book of Mormon, she had the courage to be baptized, and reported that she has found lasting happiness through the Gospel, happiness she didn’t have before.

It was a great moment, or about 20+ minutes of great moments. And it wasn’t just Mom that wanted to shout for joy. Other non-African members told me how exciting the talk was for them, too. A sharp young man from Burundi told us as we were driving him home that he loved the meetings at church that today and that “the talk” was his favorite part.

I am so proud of the members of my ward for their support and love for the many investigators and new members who have come from Africa.

I am also so proud of my community, Appleton, Wisconsin, a little Midwest town that was nearly all white a few decades ago and has had its own struggles with racism but has become a vibrant community where refugees and immigrants from several parts of the world have found kindness and great opportunities, and are welcome and important parts of both our church and our community.

I feel a real need to express my gratitude to Appleton and the surrounding Fox Valley area and Wisconsin in general for their acceptance and support of the many African people who are now here. My wife and have been in many homes of African families in this community in the past couple of months, and what I see are people who are grateful for this country, grateful for the kindness of this community, and who feel safe and welcome.

Their challenges are still great. Some have family members still in Uganda who may need to wait years more until they can be united again. They are working hard, often in local food manufacturing factories, but inflation is taking a toll as rising housing costs plus increasing costs in other areas are really hurting and complicating life. They will have many struggles to face in the future, but there is much to rejoice over now. I am grateful for what we share in this great community, this great country, and in the glorious, unifying Gospel of Jesus Christ for those who embrace that as well.

Thank you for sharing this very positive story.

Cheers for Appleton and the Fox Valley, I lived in a southern part of the Fox Valley, Batavia, Il!!! They are to be applauded for honoring the commandment to love our neighbors as ourselves. And congratulations to all the immigrants who face very hard challenges in learning a new culture and a new religion too! It will all be worth it!!!