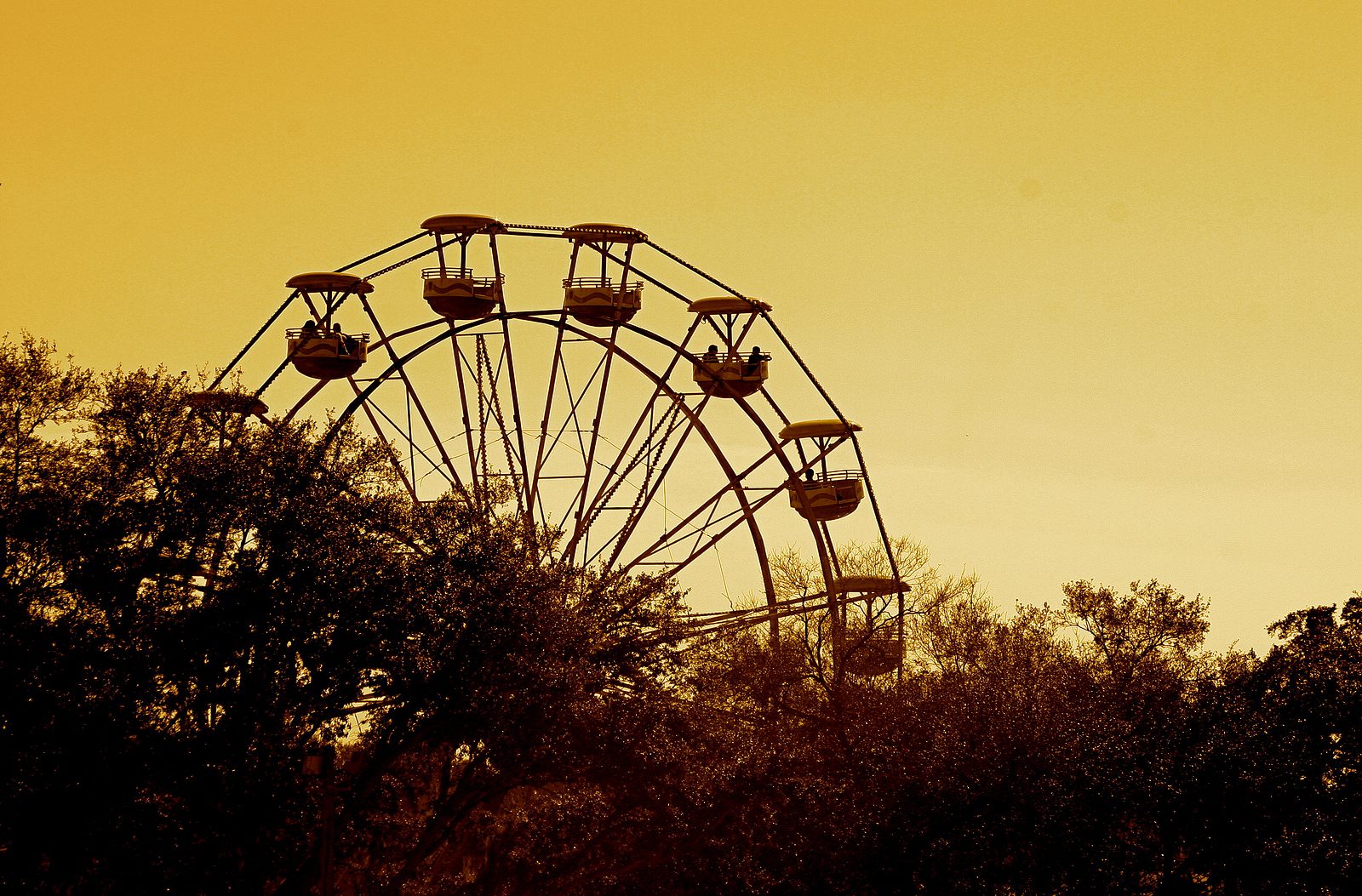 Ken took his seven-year-old grandson, David, to the fair. It was a big fair, and there were lots of things to see and do. There were the animal barns, the homemaking displays, and, of course, the carnival rides. Both Ken and David loved the big draft horses. David enjoyed the fancy chicken breeds, while Ken felt they were somewhat useless. But when it came to the rides, Ken was not so keen on them at all.

That didn’t even sound fun to Ken, especially since they had just eaten. First off, he was afraid of heights, and second, he could envision himself throwing up on all the people below.

Ken shook his head. “I know how young people are. A person can’t trust them out of their sight for an instant. They do things they shouldn’t do, acting like daredevils and risking their necks. You’re not going on it alone, and I’m not inclined to go with you.”

Ken suggested instead they try their hand at throwing the balls at the pins in one booth. David was disappointed, but he agreed to that. A little while later, with twenty dollars less and a toy a person could buy for a dime, they gave up on that activity.

“Hey, look, Grandpa,” David said. “How about the octopus ride? That one doesn’t go too high.”

Ken paid the money, and he and David got themselves buckled into one of the chairs. But what Ken quickly learned when the ride started was that it didn’t just go in a circle like a merry-go-round. Each chair also spun around. By the time the ride finally came to a stop, Ken was not only feeling nauseous, but he desperately needed to find a bathroom.

They hurried around the fairgrounds to the bathroom building and found a line snaking back and forth among chains for about fifty yards. Ken considered the situation and then knew what to do. They had been at the fair for a long time, and it was pretty much time to go home.

David balked at leaving, but he was good to do what he was told, and soon they had walked back to their car. Ken knew he couldn’t make it all the way home, so he stopped at the first place he found that he knew would have a bathroom—a Walmart.

Ken rushed in as fast as he could go without garnering too much attention, keeping David in tow. When they got to the bathrooms, Ken dropped David’s hand.

“You stay right here, and I’ll be back in a minute,” Ken said.

He hurried into the bathroom and located an empty stall. Soon he was feeling much better. But when he stepped out, to his horror, two women were standing there washing their hands. That was when he realized he must have gone into the wrong bathroom.

One woman started screaming when she saw Ken. She also yelled for security, and everything Ken did just made it worse. Then, suddenly, David appeared.

David came over and took Ken by the hand. “Come on, Grandpa, we need to get you back home.”

The lady stopped screaming and spoke kindly to David. “This is your grandpa?”

David nodded. “I’m so sorry about the problem. You know how old people are. A person can’t trust them out of their sight for an instant. They do things they shouldn’t do. I’ll take him out of here now.”

The lady smiled. “You are a good grandson.”

The fact that David had used Ken’s words from by the Ferris wheel didn’t go unnoticed to Ken. And once David had led Ken by the hand out of the store, Ken stopped and looked at his grandson.

“You know, David, I think you’re responsible enough to ride the Ferris wheel on your own. Let’s go back to the fair and let you ride.”

And that’s just what they did.