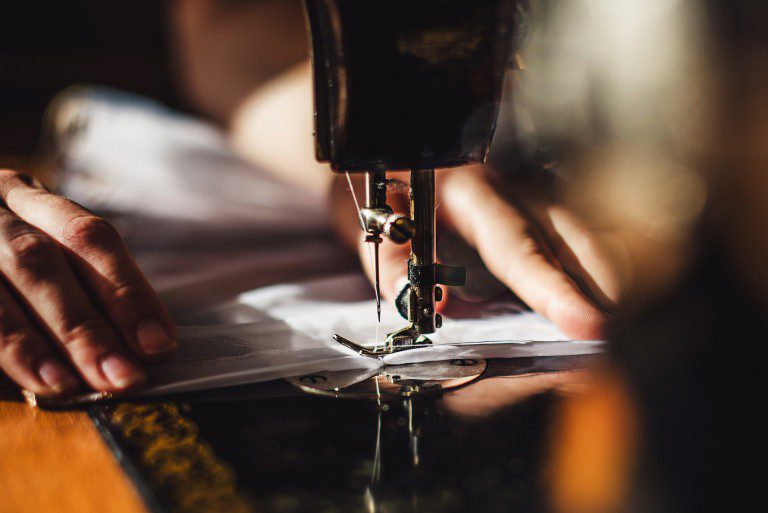 A Desk Full of Memories

As we moved furniture recently, a small white desk brought a flood of memories to my mind. My wife, Donna, and I had only been married about a year and a half and had a two-month-old daughter. I was struggling to work my way through college and take care of my little family. What work I found was usually part-time, paid minimum wage, and was seldom steady.

Donna tried to save money in every way she could. She purchased an old sewing machine at a garage sale and sewed our clothes. Much of the work I found was hard, physical work, and I often tore holes in my clothes, especially my pants. Donna patched them until even my patches had patches on them.

But it was hard for me knowing Donna had no desk at which to sew. The only surface we had in our apartment was the small kitchen table. But it was hard to lay everything on it, only to move it to eat. And it didn’t fit much more than the sewing machine. I would come home from a long day of work, and Donna would be sitting on the floor sewing, with the baby close by. It was cute, but it was hard on Donna’s back and made her tired. I decided to try to get her a sewing desk. Everywhere I went I looked for an inexpensive desk at secondhand stores and every garage sales but found nothing we could afford.

Then, one night, we went to a charity auction. I scraped together every penny we had and counted twenty dollars. I was hoping to buy some tools to fix our small pickup. It was our only transportation, and it was not running well. At the auction, we added the Jello salad that Donna made with the other potluck food and then paid the five dollar donation for the meal. After we ate, we wandered among the donated items before the auction started.

I found an old set of tools that I thought would work for what I needed. They had a suggested starting bid of five dollars. But then something else caught my attention. I saw Donna standing by a nice little desk. It wasn’t just any desk; it was a sewing desk with drawers made for bobbins and other useful items. I saw her look at the suggested bid and disappointedly turn away. I went over and looked at the tag. It suggested a thirty dollar opening bid. My heart sank. The desk would be perfect, but we only had fifteen dollars left.

The auctioneer started and moved through the items quickly. When he got to the tools and started the bid at ten dollars, I almost bid. But somehow, I couldn’t do it. All I could think of was the desk. The tools sold for twelve dollars, and Donna asked why I didn’t bid.

“I’m not sure they were what I needed,” I replied.

That was true, but there was a more important reason. When the desk came up for bid, the auctioneer asked, “Who will bid forty dollars?” No one said anything, so he dropped it to thirty-five, then thirty, then twenty-five. Still no one bid, so he moved to something else.

When he had sold almost everything else and paused for a moment, I slipped up to him.

“Are you going to sell the desk?” I asked.

“No one seemed to want to start the bidding,” he replied.

“How much do you want to bid?” he asked.

“Fifteen dollars is all I have,” I replied, “and I will bid it all.”

He looked at me and seemed to realize that I was a struggling college student, and he smiled. “You’ve got yourself a desk.”

He motioned to the lady marking down the sold items, and she handed me the paper to pay for the desk. But after everything else was sold, a man asked about it. The auctioneer told the man the desk was sold.

“But no one even bid on it,” the man complained. “I planned to, but I didn’t want to start.”

The auctioneer turned and smiled at me, then said to the man, “I doubt you could have beat the bid, because you’d have to give everything you had.”

And as we recently moved the old desk, I think Donna remembered, too, because she looked at it, smiled, and hugged me.

This is a really beautiful, touching story. Thank you.

Entertaining - but thought provoking, as usual!