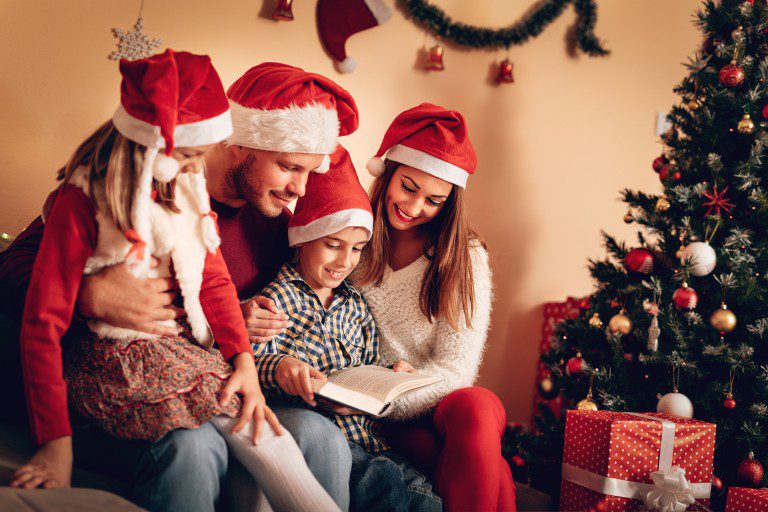 A nice way to end a Christmas family home evening is with this choral reading that juxtaposes scriptures from the Bible and Book of Mormon. Each family member who is old enough to read is given a copy and the group is divided in half. One group reads the Bible scriptures and other reads the Book of Mormon scriptures. A narrator reads the bold, italicized headings. (Citations are not read.)

The Christmas Story on Two Nations

A Star
From the Book of Mormon: There shall a new star arise such an one as ye never have beheld (Hel. 14:5).
From the Bible: When they saw the star, they rejoiced with exceeding great joy (Matthew 2:9-10).

His Name
From the Bible: And she shall bring forth a son, and thou shalt call his name JESUS (Matthew 1:21).
From the Book of Mormon: According to the words of the prophets… his name shall be Jesus Christ, the Son of God (2 Nephi 25:19).

Wise Men
From the Bible: Behold, there came wise men from the east to Jerusalem (Matthew 2:1).
From the Book of Mormon: And angels did appear unto… wise men (Helaman 16:14).

Jesus’ Birth
From the Book of Mormon: There were some who began to say that the time was past for the words to be fulfilled, which were spoken by Samuel, the Lamanite. Now it came to pass that there was a day set apart by the unbelievers, that all those who believed in those traditions should be put to death except the sign should come to pass…. Now it came to pass that when Nephi… saw this wickedness of his people, his heart was exceedingly sorrowful. And… he went out and bowed himself down upon the earth, and cried mightily to his God in behalf of his people, yea, those who were about to be destroyed because of their faith in the tradition of their fathers. And it came to pass that he cried mightily unto the Lord all that day; and behold, the voice of the Lord came unto him, saying: Lift up your head and be of good cheer; for behold, the time is at hand, and on this night shall the sign be given, and on the morrow come I into the world, to show unto the world that I will fulfil all that which I have caused to be spoken by the mouth of my holy prophets. (3 Nephi 1:5; 9-13).

From the Bible: And Joseph also went up from Galilee… unto… Bethlehem… to be taxed with Mary his espoused wife, being great with child. And… the days were accomplished that she should be delivered. And she brought forth her firstborn son…. And there were in the same country shepherds… keeping watch over their flock by night. And, lo, the angel of the Lord came upon them, and the glory of the Lord shone round about them…. And the angel said unto them, Fear not: for, behold, I bring you good tidings of great joy, which shall be to all people. For unto you is born this day in the city of David a Saviour, which is Christ the Lord…. And suddenly there was with the angel a multitude of the heavenly host praising God, and saying, Glory to God in the highest, and on earth peace, good will toward men. (Luke 2:7, 9-14).

From the Bible: For God so loved the world that he gave his only begotten son, that whosoever believeth in him should not perish, but have everlasting life (John 3:16).

Thanks, we are going to try this.