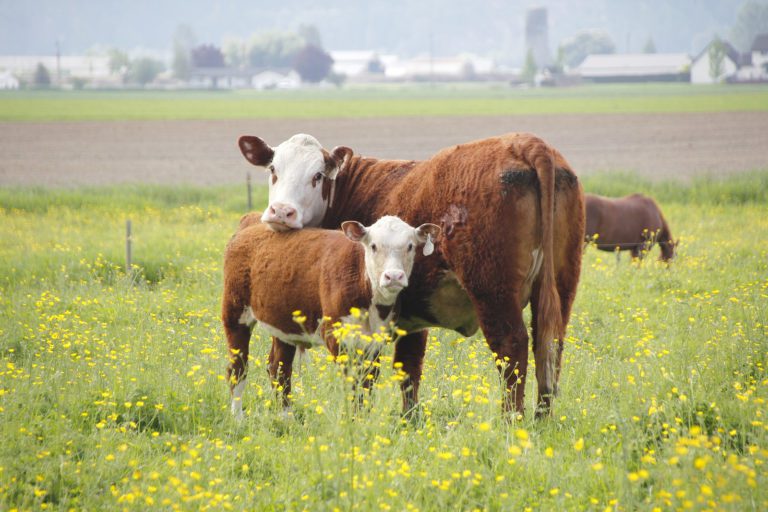 It was mid February, and the temperature was about -20 degrees when I went to take care of the pregnant cows. Buttercup, who was past due, was nowhere to be found. Instead there was a hole in the fence, and beyond it were hoof prints in the two-feet-deep snow. The full moon shining off of the snow made tracking her easy. A slight melt, followed by a freeze, had made a snow crust hard enough I could walk on the top.

Buttercup’s trail led a half mile east and then crisscrossed. As I debated which way to go, I heard a coyote howl. Unlike a wolf, which is large and to which an unarmed man would have little defense, a coyote is much smaller, and I could probably stand up to two or three of them. However, when they call to each other, they are usually forming a pack. A pack can be very dangerous since some will distract their prey while the others attack from behind.

I counted responses to the first call: one, two, three, four. I quit counting and looked for a means of defense. I saw some trees in the moonlight and moved toward them to find a branch I could use as a club. But when I reached the trees, I found another problem. Buttercup was there with her calf, which was still wet and likely only minutes old. I realized that it wasn’t me the coyotes were smelling, but the blood from the calf’s birth. The calf couldn’t walk yet, and though Buttercup might be able to fight for herself, she couldn’t while defending her calf.

I knew that if I left the calf, it would surely be killed, and that Buttercup might be killed, too, trying to defend it. But if I tried to carry the calf to the barn, the pack would likely overtake us, jeopardizing my life as well. I looked at the baby, small, wet, and shivering, and knew I couldn’t leave him. I lifted him over one shoulder and picked up a stick in the other hand. I was grateful wrestling season had barely ended so I was still in good shape, but as I stepped onto the snow, carrying eighty extra pounds, the top crust broke and I sank in past my knees.

I counted on the coyote pack coming first to clean up the blood and placenta from the birth and hoped that would buy me a five to ten minute head start, but I didn’t plan on the snow slowing me down. I trudged forward, moving as fast as I could, with Buttercup falling in behind me on the path I broke for us.

The pack closed in quickly on the place we left. I could hear the coyotes fighting over what they found as I pushed myself hard, feeling the freezing air burning my lungs. The sweat started pouring down my back, freezing in ice ribbons the length of my body. I had traveled about a quarter mile when I heard a coyote howl and knew they were back on our trail.

The adrenaline surged through me, and though I was exhausted, I quickened my pace. I was almost to the edge of where the cow herd had tramped the snow, where I would be able to walk easier, when the first coyotes attacked Buttercup. She whirled to fight, and I dropped the calf to join her. A coyote darted in and bit at the calf and I swung my stick and missed it. I was too exhausted to fight, but I had little option. But, then, suddenly I didn’t have to. The other cows, hearing the calf cry, and naturally hating dogs, smelled the coyotes and came to chase them away. After a moment’s rest, with what little strength I could muster, I carried the calf to the barn.

Before I made it to the house, my dad was there, searching for me. I was shivering so badly he rushed me inside and helped me pull off my winter clothes while my mother heated a cup of milk. For the next two weeks I fought pneumonia and a fever. When I was finally up again, though still weak, my Dad patted my shoulder and said, “There is something you need to see.”

I followed him to the barn, and there was the cutest little calf. As it nuzzled me, my dad said, “We named him Lucky, but you can change his name if you want to.”

I smiled. “I think Lucky pretty much sums it up.”

That's a good commentary about those in the Church helping those who are faced with the onslaught of evil and are too weak to fight alone. Thanks!

Thanks! Everything matters. Your choice and act that day changed you -- stayed with you -- helped define you. Great story. Great act.