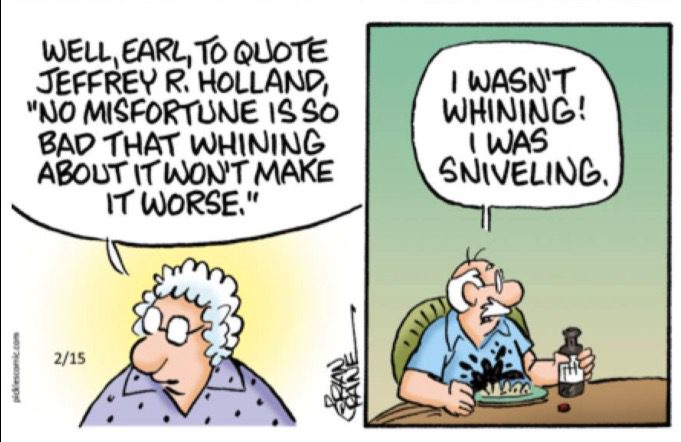 A quote by Elder Jeffrey R. Holland of the Quorum of the Twelve Apostles was recently featured in the national comic strip “Pickles.”

The Feb. 15 comic shows husband Earl and wife Opal having a conversation. When soy sauce unexpectedly spills all over Earl’s shirt, Opal responds, “Well, Earl, to quote Jeffrey R. Holland, ‘No misfortune is so bad that whining about it won’t make it worse.’”

In his April 2007 general conference talk “The Tongue of Angels,” Elder Holland refers to this statement as one of his “maxims for living.”

“We should honor the Savior’s declaration to ‘be of good cheer.’ (Indeed, it seems to me we may be more guilty of breaking that commandment than almost any other!),” Elder Holland told the worldwide audience. “Speak hopefully. Speak encouragingly, including about yourself. Try not to complain and moan incessantly. …

“Yes, life has its problems, and yes, there are negative things to face, but please accept one of Elder Holland’s maxims for living — no misfortune is so bad that whining about it won’t make it worse.”

Elder Holland is not the first Church leader to be quoted in “Pickles.”