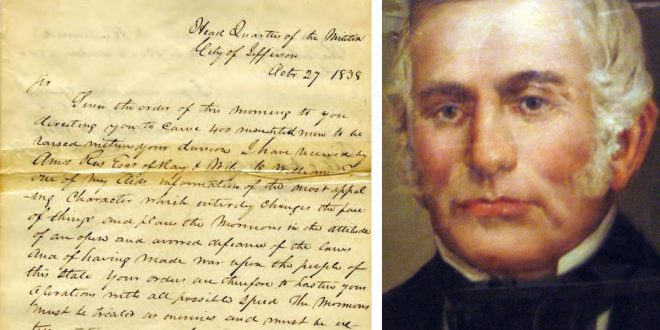 10 Things You May Have Not Know About the Extermination Order

The following was posted by Aleah Ingram at LDS Daily. To read the full article, click here.

On October 27, 1838, Governor Lilburn W. Boggs issued the Extermination Order, which directed the militia and other state authorities to drive Mormons from the state, or they needed to be exterminated. Here are ten things you may not have known about this infamous time in Latter-day Saint history.

ONE. The order, though known colloquially as the extermination order, is officially known as Missouri Executive Order 44.

TWO. Governor issued the Extermination Order after the Battle of Crooked River on October 24, 1838. During the skirmish, a Missouri state militia unit and Latter-day Saint men came to battle after three Mormons had been captured by Captain Samuel Bogart. By the end, four men (three Mormons and militiaman) were dead.

FOUR. One of the greatest points of contention between Latter-day Saints and other citizens was the occupation of land. After years of persecution, the growing religious community was given Caldwell County to settle, after their expulsion from Jackson County. However, the influx of converts to the area meant other counties began to see larger LDS populations. Settlers became angry and other factors, such as Joseph Smith’s opposition to slavery and the growing influence of LDS communities, led to inflamed conflicts.

To read the full article on LDS Daily, click here.