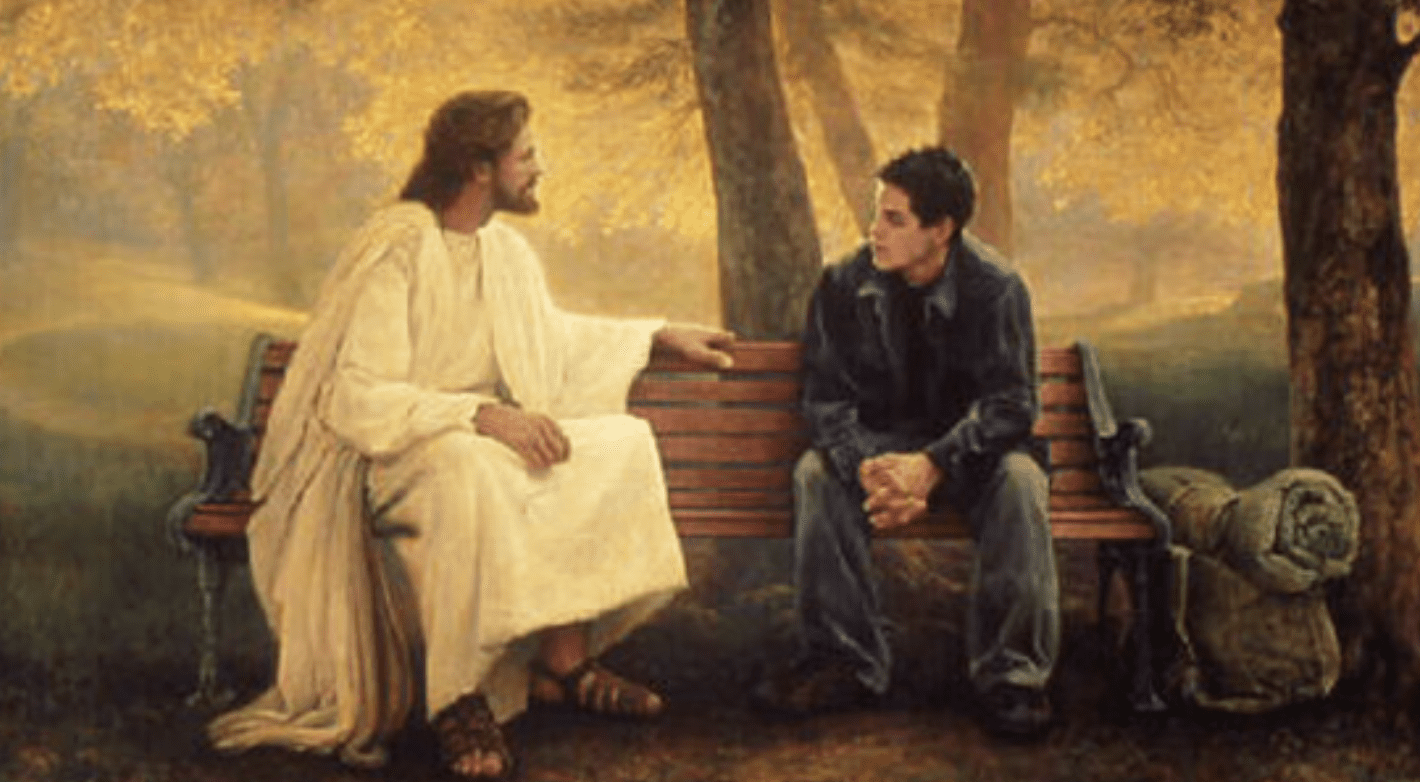 I recently wrote an article about small children who saw Jesus and felt his all-encompassing love, warmth and kindness. Today I want to focus on tender yet profound experiences that teenagers have had with the Lord.

Teenagers are at a very delicate stage in their sojourn on earth.  Sometimes they are allowed to have special reminders that the Lord is near.  I’d like to share four striking experiences where teenagers have been the focus of the Lord’s love.

From “Out of Control” to “In His Arms”

When Casey Miller was just two years old, he was involved in an accident where his foot was cut off and his leg badly injured.  He underwent many surgeries as a result of his injuries, but he still had a very noticeable limp.  As he grew older, he became a target for bullies.  He was teased mercilessly, and his sense of self-worth was very low.

Finally, in high school, he had had enough. He made the decision to take steroids, reasoning that if he took them, and became bigger, people would leave him alone and fear him instead of teasing him.  He was right.  He became very large with the over-use of steroids and developed a reputation for being mean.  If anyone would dare to jeer at or mock him, he would beat them up.  He became the bully.

Casey believed early on that getting big and mean would solve his problems, but he was wrong.  The repeated use of steroids, and their effects twisted him into someone he didn’t want to be.  He was becoming out of control.

One day, when he was 17- years-old, Casey’s mother began to advise him against his steroid use and asked how she could help him.  He became violently angry and grabbed her by the neck and with one hand pinned her against the wall.  In that moment of rage, Casey saw a look on his mother’s face that he’ll never forget.  He saw terror, and a fear for her life.

When he saw this look on her face, Casey had a moment of clarity, and passionately asked himself, “What am I doing?”  “How have I become this person?”  “Why do I have Mom by the neck against he wall?”  He slowly set her down, profusely apologized through his tears, and then ran out of the house totally distraught.

At this moment of self-rejection, Casey decided that his only way out of this situation and the monster that he had become was to end his life.   He got on his bullet bike and barreled up a nearby canyon.  He was searching for the steepest cliff, and finally found the spot.

He got off his bullet bike and was in the process of thinking through what he intended to do.  Just then his cell phone rang.  It was a friend of his, but he declined the call.  The phone rang again and again and was very annoying because it was breaking his concentration.  Finally, Casey angrily answered the call and exclaimed,

“Where are you?” asked his friend.

“I’m in Ogden canyon and I’m fine!” he angrily said.

and then hung up from the call.

At that moment in time everything seemed to stand still. Casey experienced something he had never felt before.  He literally felt the Savior wrap his arms around him as he sat on a large rock overlooking the cliff.  He became immersed in the Love of Christ and could feel how he was personally cherished in a way he could never have imagined.  He felt viewed from the Lord’s perspective and for the first time realized the worth of his own soul.

The Lord kept him in this embrace until his friend came a few minutes later.

When his friend arrived, they talked about Jesus, the Atonement, and the ability to change.  Then and there Casey resolved to stop taking steroids, and decided he was going on a mission.

Immediately he began to apply the Atonement in his life.  He had felt the Lord himself, and now realized his personal worth.  He sought help from family and church leaders and experienced a true change of heart.  He went on to serve a mission, got married and sealed in the temple, and has adopted two children.  He continues to know that whatever happens, he is loved and valued.

In the following account, a teen was given a powerful personal witness of the Savior’s divinity.  Gary E.  reveals a transformative experience his teenage son shared with him one night.  He writes:

“My teenage son was awakened one night by a bright light in his room.  He saw a beautiful figure standing by his bed who said nothing but showed him the prints of the nails in his hands.  Our son was able to take his hand and actually feel the warmth, before the figure left.”

That experience left an indelible print in the soul of the young man.

Everything associated with our Lord is warm and full of light.  He always brings hope, and an encouraging point of view.

After Jesus was resurrected, there is an account in the scriptures where he withholds his glory and appears as a regular man in regular clothing of that time and place, on the road to Emmaus.(Luke 24:15-32 )  The following is a profound experience of a 15-year-old girl, where Jesus came to her in a manner that was right where she was at, – in her culture, – in order to save her from herself.

Sharon Milliman had a near death experience when she was around 13 years old, in a swimming accident.  In it she saw and heard wonderful things. She tried to describe what happened to several adults, but they all told her and that something was seriously wrong with her and her feelings and experience were imagined.

When she was 15 years old, she came to a point that she couldn’t take the ambiguity anymore, and she decided that she was going to take her own life.  She had it planned out and was going to do it soon.  Then she had the experience!

It was “Good Friday,” and her choir was practicing a song they were going to sing in an Easter program.  She said:

“I was sitting on the back row. I noticed a man who had come in the door, and he was approaching.  As he got closer, I immediately sensed that there was holiness in that room, and I realized instantly that it was Jesus.  He was beautiful!  He was dressed just normal with a white shirt, a pair of blue jeans and a pair of boots.

“He looked at me and He smiled.  He had the most beautiful smile I’ve ever seen. I was so astonished, that I didn’t know what to do!”

Jesus walked to where she was and said:

“What is happening to you in your life IS happening. You’re not crazy!  I love  you, and I’m with you.  Don’t be afraid!”

Sharon was “blown away” by this experience!” She said,

“Nobody knew what was going on in my head and what I had planned to do, so for Him to say that to me was astounding!”

After He spoke these words to her, he left, but she felt completely encompassed in His love and no longer had the notion of self-destruction.  This experience changed her life and gave her confidence to be who she was.

You Can Do It!

I was also very moved by a story that Karen Draudt. shared with me about a profound experience she had feeling the Savior as a 17-year-old.  She writes:

“I had a very special experience when I was 17.  I had a dream about the Savior.  It was about the 2nd coming of Christ and was very detailed.  I remember seeing him appear in the darkness of the sky.  I turned to my mother asked what I should do, and she said,

I remember running towards him with all of my might.  I was the first person to get to him, we caught each other in an embrace, and I felt him on my face and he called me by name and said,

I remember the thrilling feeling I had as he held me and spoke my name.  I woke up shortly thereafter filled with awe and wonder.  It was amazing!  I know the Savior knows us individually because He knew my name!  I have thought many times on that very intimate experience, and I am so grateful for it.”

Each of these accounts gives us a small window into the Savior’s mind and heart.  He somehow was able to be exactly what each teen needed him to be for their own understanding and comfort level. His Presence let each of them know that He loved and believed in them.  He also offered them a gentle nudge to improve their lives.

He Comes to Where We Are and Lifts Us Higher

Whoever we are, and wherever we are, we can also have personal experience with the Lord. He is our Savior no matter what age we are.  He has told us that if we will always remember Him, His Spirit will always be with us.  (D & C 20:77)

His embrace is for all. You Can CONTACT Anne Pratt at [email protected].

To Brad, hope you don't feel picked on. It is very hard to be patient when everyone encourages patience, and you are in the throes of anxiety and depression. If you are patient and believe or desire to believe, it will come. I suffered these things off and on most of my life and finally found Christ's overwhelming joy in my forties. Definitely worth the struggle and the wait. When I read your comment I remembered a very inspired blessing I gave to an elder who appeared like your comments. The Spirit took over; it was a beautiful blessing. The Spirit told him that what he was experiencing was by design and encouraged him to hold on and be strong and patient, that his experiences were developing him to help many many others, in his future, whom most would be unable to help; but that he would because of his experience and struggle and strengthening. I am from Louisiana. We cook. Life is a gumbo with hours of preparation and is at its best the next day. Don't make life a microwave meal. They are barely sustenance and just not that good. By the way try a little potato salad in your gumbo; it's really good.

Brad, your questions brought me to tears in sympathy for your sadness. It is so hard to read about marvelous experiences that seem to happen to everyone but you. As I read through the scriptures many years ago as a new member, I heard the experiences of Moses, Isaiah, Paul, Nephi and Abish and wonder "Why not me?". What I failed to see was that each of these experiences were tailored to a specific need, either the person's or God's. I eventually had my own powerful witness, which came because the Lord needed me to do something. You, too, will have your own witness, but it's never an event that comes just because you want it. It comes because you are ready for it, even if you don't realize it before hand. His timing is always perfect, and He will manifest Himself to you in a most unexpected way, a way you can't explain to others or maybe even to yourself. You are being prepared for that, and it will come. Stay true to the course the Lord has set out for you, keep close to the Savior, and ask for strength to do what He asks of you. He loves you, completely and unconditionally.