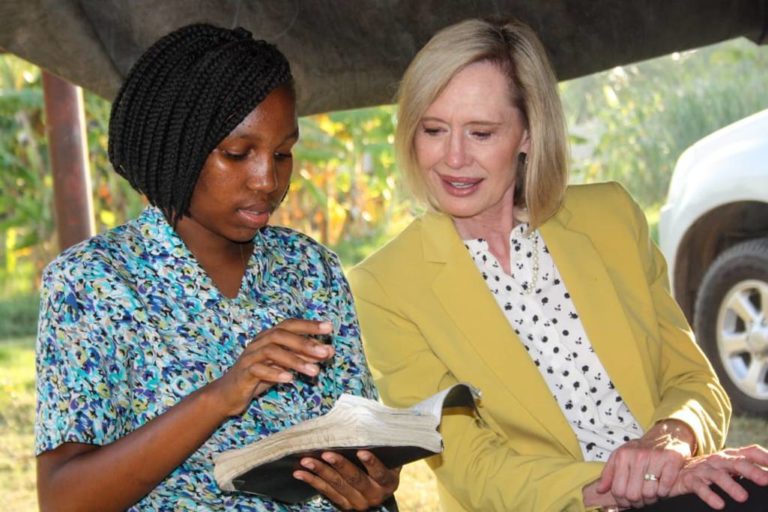 Looking out over a crowd of women in Cape Town, South Africa — women of all ages and all colorfully dressed — Sister Lisa L. Harkness felt impressed to hum a simple hymn. After just the first few notes of “We Thank Thee, O God, for a Prophet,” a swell of music rose around her, encompassing her and overwhelming her quiet hum.

“As soon as I started, the whole congregation of women burst out singing,” Sister Harkness said. “And in Africa, when they sing, it’s all around you. It encompasses you. It fills your soul, it heals you, and it testifies at the same time. When they started singing, we were all filled with the love of God.”

The powerful experience, Sister Harkness said, in many ways is representative of her whole experience there.

In her role as first counselor in the Primary general presidency, Sister Harkness joined Sister Bonnie H. Cordon, young Women general president, for a 12-day visit to the Africa Southeast Area from May 16-28.

Sister Harkness said she experienced countless evidences of Heavenly Father’s love for His children as she and Sister Cordon spent nearly two weeks traveling across the southern section of the continent as they trained leaders, spoke at devotionals and met with members and missionaries.

Recalling the whirlwind visit, Sister Harkness said she was impressed by the strength of the members and their love for God in each of the various countries and cultures.

“The Church is young there, very young,” Sister Harkness said. “But the leadership is valiant, awesome and powerful.”