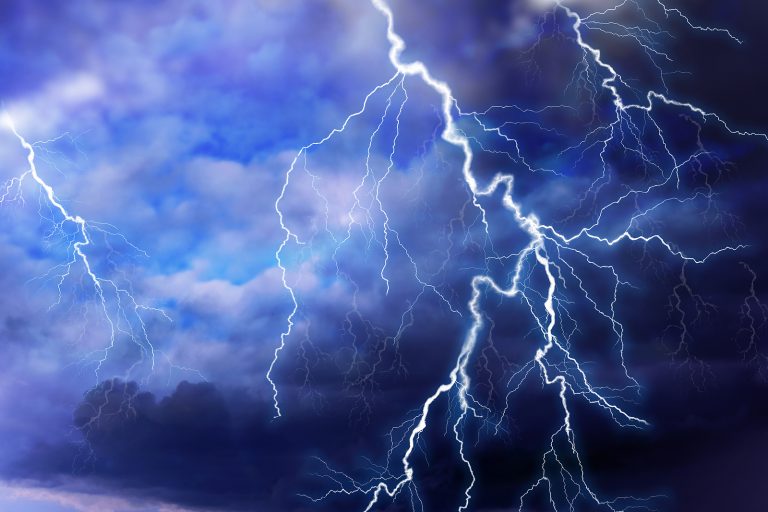 As an Amateur Radio first responder, one of the things I have been trained to do is to act as a weather spotter for NOAA (The National Oceanic and Atmospheric Administration). This training has reminded me how very, very dangerous lightning is and how aware we need to be to avoid the dangers. As NOAA says,” When Thunder Roars, Go Indoors”.

Lightning is fascinating to watch but also extremely dangerous. In the United States, there are approximately 25 million lightning flashes every year. Each of those 25 million flashes is a potential killer. While lightning fatalities have decreased over the past 30 years, lightning continues to be one of the top three storm-related killers in the United States. Lightning injures many more people than it kills and leaves some victims with life-long health problems.

Understanding the dangers of lightning is important so that you can get to a safe place when thunderstorms threaten. If you hear thunder, even in the distance, you are already in danger of becoming a lightning victim.

Right now, thunderstorms are a real danger in several areas from the west to the east coasts. Dry lightning is also a huge concern as it can strike without warning and is the cause of many wildfires.

All thunderstorms go through stages of growth, development, electrification, and dispersion. Thunderstorms often begin to develop early in the day as the sun heats the air near the ground causing pockets of warmer air to rise. The final stage of development occurs as the top of the cloud becomes anvil shaped. If you see an anvil shaped cloud or a cloud with a greenish tint, thunderstorms are possible, and you need to be aware and prepare.

It’s not the thunder or the rain that is most dangerous, although the rain may cause flooding, it is the lightning.  A lightning storm can occur without any precipitation. These are very dangerous and have caused many, many firestorms resulting in loss of life and property.

There is no safe place outside when thunderstorms are in the area. If you hear thunder, you are likely within striking distance of the storm. Just remember, When Thunder Roars, Go Indoors! Too many people wait far too long to get to a safe place when thunderstorms approach. Most of us have had the experience of being at a baseball game, in the pool or at a picnic and hearing thunder in the distance. Do we immediately leave? We should. Unfortunately, delaying action has led to many lightning deaths.

The best way to protect yourself from lightning is to avoid the threat. You simply don’t want to be caught outside in a storm. Create a lightning safety plan and discuss it with your family before the need arises. Cancel or move activities indoors when thunderstorms are expected.

If you are in a forested area and hear thunder, get out immediately. Forest fires started by lightning are very common. Last year during the California wildfires a CH-47 Chinook helicopter and a UH-60 Black Hawk helicopter flew through intense smoke and embers to rescue frightened campers at the Mammoth Lake Reservoir where they had gathered just 50 feet from the approaching fire. The fast-spreading Creek Fire had trapped more than 200 lakeside campers whose exit routes were no longer passable. Six trips were necessary to complete the rescues. One of the pilots said it was a more dangerous mission than most he had flown in combat.

A safe shelter from lightning is an enclosed building, one with a roof, walls, and floors.

Helping someone who is struck by lightning

Treat those who are injured but conscious next. Common injuries from being struck by lightning are burns, wounds and fractures.

Take lightning safety seriously and teach your family the warning signs and what to do. If you feel tinging or your hair standing on edge, run, you are about to be struck. Each year there are as many deaths from lightning as there are from hurricanes. Never take chances. In addition to deaths there is also an average of 1,800 injured. Over 90% of the survivors of lightning strikes end up divorcing because of the mental problems caused by brain injuries when electricity passes through the body. Lightning is very dangerous, don’t discount the threat.

Visit TotallyReady.com and Totally Ready on facebook for tips and answers to your questions. Message Carolyn at: [email protected] or on facebook messenger to ask a question, make a suggestion for a future article or schedule a zoom class for your ward, family or community group.