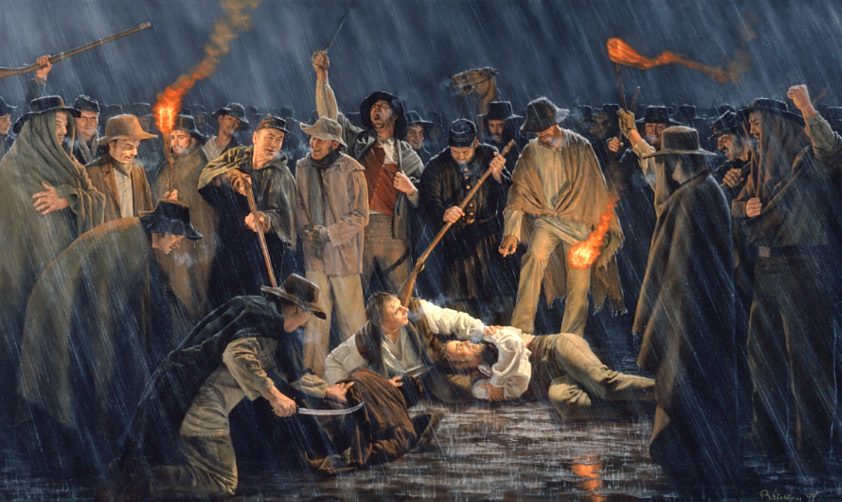 When It Seemed Impossible to Follow the Prophet—But They Did

In July 1838, while the Latter-day Saints were living in Far West, Missouri, Joseph Smith received a revelation that the Quorum of the Twelve were to be called on a mission to England, and the instructions were specific.

When this revelation was received, the Saints were living happily in Far West and did not know the thunderous storm clouds that lay on the horizon. By April 1839, the blackest, and most hateful Missouri persecutions had intervened. The people at Haun’s Mill had been massacred, while their children were at play; Joseph Smith and other key leaders had been falsely imprisoned in Liberty Jail; and Governor Boggs had issued the Extermination Order, making it legal for anyone to kill a Mormon in Missouri.

The people in Far West had been driven by gunpoint from their homes, their flocks scattered, their crops burned and some of their women ravished in brutal scenes that defy the imagination.

Lucy Mack Smith described the pitiable scene in front of her Far West home, “The people were all driven in from the country, and there was more than an acre of land in front of our house completely covered with beds, lying in the open sun, where men, women, and children were compelled to sleep in all weather. These were the last who had got into the city, and the houses were so full that there was no room for them.

“It was enough to make the heart ache to see children in the open sun and wind, sick with colds and very hungry, crying around their mothers for food and their parents destitute of the means of making them comfortable, while their houses, which lay a short distance from the city, were pillaged of everything, their fields thrown open for the horses belonging to the mob to lay waste and destroy, and their fat cattle shot down and turning to carrion before their eyes, while a strong guard, which was set over us for the purpose, prevented us from making use of a particle of the stock that was killed on every side of us.”

She continued, “Soon after this the brethren were compelled to lay down their arms and sign away their property. It was done immediately in front of our house, and I could hear General Clark’s speech distinctly in which he declared that my sons must die, that ‘their die was cast, their doom was fixed, their fate was sealed, and also that if he could invoke the spirit of the unknown God to rest upon us, he would advise us to scatter abroad.”

By the 20th of April 1839, the last of the Saints had left, fleeing Far West at gunpoint, with the threat of death upon them should they not remove themselves immediately.

What did this mean for the fulfillment of this revelation? It would seem, of course, impossible and irrational to even attempt.

It was unusual for a revelation to specify a definite date and a particular place, but this one did. Joseph Smith had spent the winter in the dank Liberty jail, and in Missouri, some were boasting that if the Twelve returned to fulfill this commandment, they would be murdered.

Wilford Woodruff said, “It was with the greatest difficulty that many of them, especially the prominent ones, got out of Missouri, for at that time many people of that state acted as though they thought it no more harm to shoot a Mormon than to shoot a mad dog.” The mobsters boasted that the revelation calling the Twelve to England could never be fulfilled, and thus Joseph was no prophet.

On April 5, 21 days before the Twelve were to leave, eight men, including the county judge, burst into the office of the Committee on Removal, and gave Latter-day Saint Theodore Turley, who had been left behind to settle affairs, the paper containing Joseph Smith’s revelation and asked him to read it.

Turley said, “Gentlemen, I am well acquainted with it,”

They said, “Then you, as a rational man, will give up Joseph Smith’s being a prophet and an inspired man? He and the Twelve are now scattered all over creation; let them come here if they dare; if they do, they will be murdered. As that revelation cannot be fulfilled, you will now give up your faith.”

Turley jumped up and said, “In the name of God that revelation will be fulfilled.”

Yet, even some members of the Church had doubts about it. They thought, surely the Lord would not expect this, given the dangerous conditions in Missouri. The Lord would surely accept their work no matter what date and what place they left from.

Those of the Twelve who were in the vicinity of Quincy, Illinois had the proposition placed before them on April 24. Would they be willing to go back to the temple site in Far West as the official starting place of their missions? Brigham Young had no question what their course should be, but some wondered. Surely, they suggested the Lord would take into account the murderous conditions in Missouri and not expect so much. Richard L. Evans called this, “a weak argument for weak men, which phrase is not descriptive of any member of the Twelve. When the proposition was placed before them they were in favor, to a man, of fulfilling the revelation and trusting in the Lord to deliver them.

They traveled back across Missouri behind enemy lines, alert for sounds, wary of strangers, putting their lives at risk. While it was yet dark on the morning of April 26, Brigham Young Heber C. Kimball, Orson Pratt, John Taylor and others met at the temple lot in Far West for a short service to begin their missions. Wilford Woodruff and George A. Smith were ordained apostles, making seven, or a majority, present.

They Twelve prayed in the order of their standing in the Quorum, a song was sung, and a stone was rolled into place at the southeast corner of the Temple. All was done boldly, but quietly.

“As the Saints were passing away from the meeting, Brother Turley said to Elders Page and Woodruff: ‘Stop a bit, while I bid Isaac Russell good-bye;’ and knocking at the door, called to Brother Russell. His wife answered: ‘Come in, it is Brother Turley.’ Russell replied: ‘It is not; he left here two weeks ago;’ and appeared quite alarmed; but on finding it was Brother Turley, asked him to sit down; but the latter replied: ‘I cannot, I shall lose my company.’ ‘Who is your company?’ inquired Russell. “The Twelve.’ ‘The Twelve!’ ‘Yes, don’t you know that this is the 26th, and the day the Twelve were to take leave of their friends on the foundation of the Lord’s house, to go to the islands of the sea? The revelation is now fulfilled, and I am going with them.’ Russell was speechless, and Turley bid him farewell.”

The Lord’s word was vindicated. The prophecy was fulfilled.

Theodore Turley was my great-great-great-grandfather on my mother's side, also. I am descended from his daughter, Priscilla, who was one of Amasa Lyman's 8 wives.

Theodore Turley was my great, great, great grand father on my mothers side, Phoebe Turley.