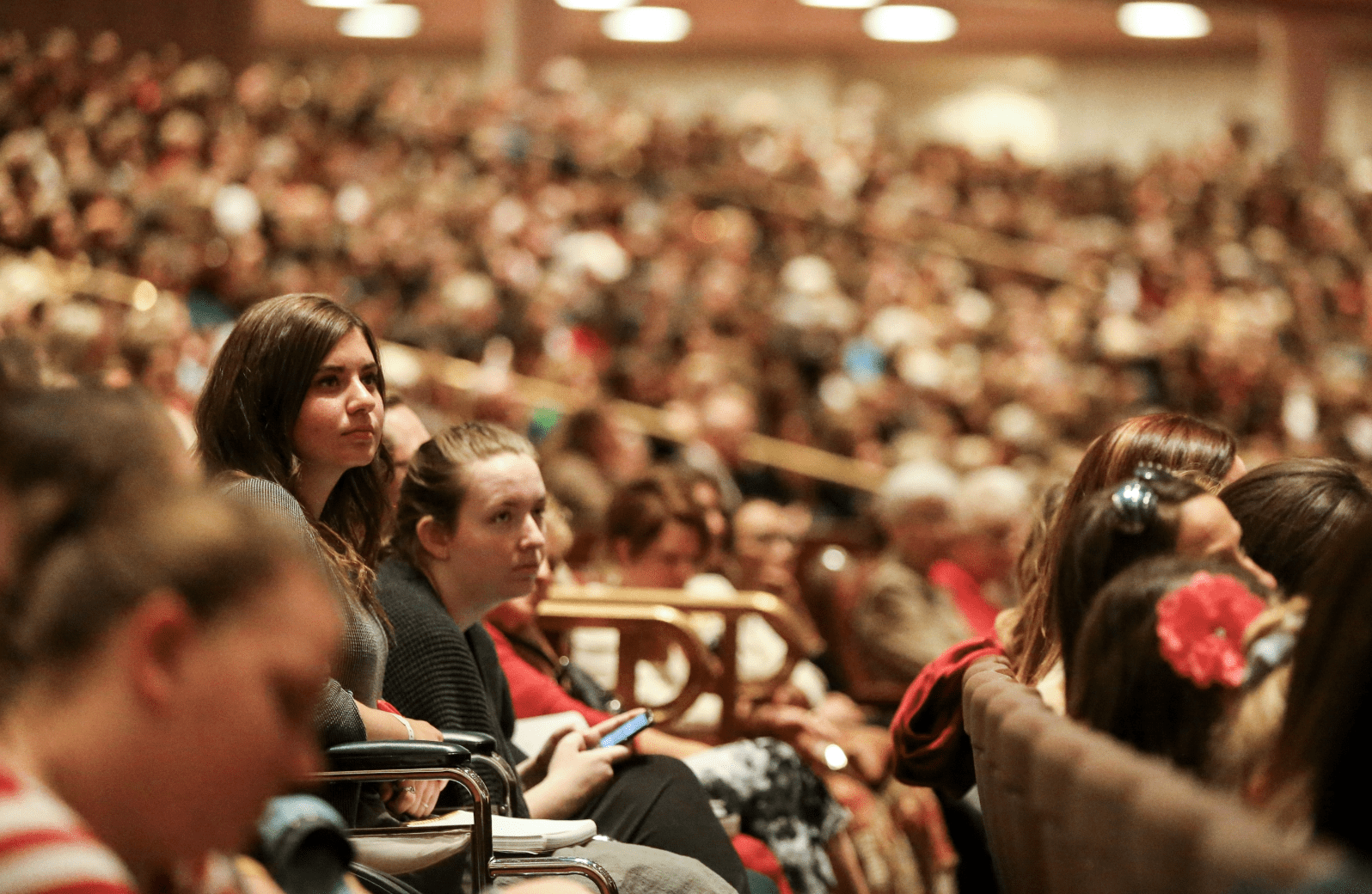 What this General Conference Meant to Me as a Woman

“Woman, why weepest thou? whom seekest thou?” Moments later, the man that Mary first assumed to be a gardener would reveal himself to be the risen Lord. Her tears would turn to tears of joy and she would become the first witness of the resurrection. Such a legacy of female witnessing makes last week’s announcement—extending the opportunity to be a witness for temple and baptismal ordinances to women—just feel right. When I heard, I wanted to go straight to the temple and participate. I hope to take the opportunity soon.

That announcement wasn’t the only policy change that the 189th Semiannual General Conference brought with it. From restructuring of the young women’s and young men’s programs to updated temple recommend questions, the restoration continues and following a path so strait and narrow involves adjustment after adjustment. Each new change seems to point towards greater personal responsibility, more exact covenant-keeping, and more deliberate discipleship. It’s a thrilling time for Gospel living. And this conference made it specifically feel thrilling to be a woman in the Gospel.

I remember the first young women’s activity I ever attended was just at the time that a new addition had recently been made to the Young Women’s theme. The phrase “to strengthen home and family” didn’t seem so foreign to me because I didn’t have the rest of the theme memorized. It was all new. But as we got to that new line in the theme, everyone mumbled and stumbled and giggled as they added the unfamiliar bit that would eventually feel like it had always been there.

When Sister Bonnie H. Cordon announced that a change was being made to the Young Women’s theme at the Women’s Session this past Saturday night, that is what I imagined; a new line or phrase, more mumbling and stumbling and giggling and before long, we’d be used to it again.

But when she recited the totally new theme, my eyes brimmed with tears and I hoped that I’d never take the words for granted or get used to them.

I am a daughter. Who is individually loved by not just a father in heaven, but Heavenly Parents. Sometimes, lots of times, a girl needs her Heavenly Mother too. That acknowledgement feels monumental to me.

With such parents, it should be no surprise that I have divine nature and eternal destiny, but I need to be reminded. A lot. The sense of deep yearning and hunger for righteousness represented by the phrase: “As a disciple of Jesus Christ, I strive to become like Him. I seek and act upon personal revelation and minister to others in His holy name.” is both moving and motivational to me.

And when, in the midst of that striving, I inevitably fall, I will “cherish the gift of repentance” (not fear it) “and strive to improve each day”.

“Understanding these truths will change the way you face challenges”, Sister Cordon explained after presenting the theme. “Knowing your identity and purpose will help you align your will with the Savior’s. Peace and guidance will be yours as you follow Jesus Christ.”

In my current calling as a young women’s advisor, I can’t wait to say this new theme again and again and never get used to it. And this wasn’t the only way the messages of this conference helped grow my appreciation for and understanding of my divine identity as a woman in the Lord’s kingdom.

“The heavens are just as open to women who are endowed with God’s power flowing from their priesthood covenants as they are to men who bear the priesthood” President Russell M. Nelson declared during the Women’s Session, “I pray that truth will register upon each of your hearts because I believe it will change your life. Sisters, you have the right to draw liberally upon the Savior’s power to help your family and others you love.”

To hear this explanation of the priesthood power that I too have been endowed with through my temple covenants, from a prophet of God, made it suddenly feel as though I was a superhero who had forgotten that she had powers. Now I remember. And now I’m anxious to explore how I can bless those close to me with the power of God, that He just reminded me, through his mouthpiece, I can draw upon.

My husband has given me so many priesthood blessings in times of difficulty or distress, but when it’s his turn to struggle, I sometimes feel a little helpless for what to do for him. But I too have access of the power of God through my covenants and I am not helpless.

President Nelson went so far as to say that the assumption that an endowed single sister does not have the priesthood in her home, is incorrect. “You may not have a priesthood-bearer in your home, but you have made sacred covenants with God in His temple,” President Nelson clarified, “From those covenants flows an endowment of His priesthood power upon you.”

“You may be saying to yourself, ‘This sounds wonderful, but how do I do it? How do I draw the Savior’s power into my life?’” President Nelson asked.

“You won’t find this process spelled out in any manual,” he explained, “The Holy Ghost will be your personal tutor as you seek to understand what the Lord would have you know and do. This process is neither quick nor easy, but it is spiritually invigorating. What could possibly be more exciting than to labor with the Spirit to understand priesthood power—God’s power?

“What I can tell you is that accessing the power of God in your life requires the same things that the Lord instructed Emma and each of you to do.

“So, I invite you to study prayerfully section 25 of the Doctrine and Covenants and discover what the Holy Ghost will teach you. Your personal, spiritual endeavor will bring you joy as you gain, understand, and use the power with which you have been endowed.”

I cannot wait to study those scriptures that he asked the sisters to look at and embark upon the spiritual endeavor of which he assured me that I am capable.

As President Nelson began to wrap up his address, he talked briefly about temples. Though the press transcript of his talk did not contain it, he then did something that was unprecedented and exciting. He chose that moment, during the Women’s Session of general conference to announce eight new temples that will be built.

To choose that moment, with that audience, to do something as important as announcing eight future temples, felt like a very pointed validation of not only the Women’s Session of general conference, but of the importance of the women of the Church in general.

It was an overt acknowledgement that the Women’s Session is not an afterthought or a sidenote, but a meeting equal in importance to its priesthood counterpart during the other session of conference each year.

I’ve always known that my womanhood was of value to the Lord. The vast majority of the women in scripture are in the Gospels precisely because Jesus Christ had such demonstrable love and respect for them. Whenever I’ve gone to the Lord in prayer, He makes me feel abundantly included and regarded.

And that’s how this conference made me feel too; included, regarded, and empowered. I’m not sure there’s ever been a conference quite like it and from the sound of it, this is only the beginning.

Jim, unfortunately for many women I know, the idea of being a wife in the eternities where there is another wife is revolting. They choose not to truly love their husband because they fear the pain that will result from sharing him. They hate polygamy, the same way Emma Smith hated it. Leaders of the Church can reassure or make light or command them to get with the program, all of which has been tried in the past. It does not work. Men commit to women when they feel uncertain, afraid they might lose her. Women commit when they feel safe. If the possibility of having to share him exists, they hold back. And getting a sealing cancellation is often necessary for someone to heal before they feel ready to make that commitment again if they suffered greatly at the hands of another priesthood holder. Unfortunately, too often the sealing cancellation request is turned down, leaving the women feeling their choices are outside their control, in the hands of faceless men who do not understand their needs and think sending them a form letter denying the request they agonized over is somehow helpful. I actually considered getting engaged to my boyfriend in order to get the sealing cancellation, then calling off our engagement, but could not do it to him. But I felt that desparate. This conference contained so much that was wonderful for women, but we still have not addressed everything that is wrong. The fear of polygamy and having your own power to truly escape an abusive marriage remain to be addressed.

During the last 3 or 6 months we have had a heavy test in our lives. As listening/watching the Conference I felt they all had had a look into our hearts, home and thoughts. That they knew exactly what was going on. What a miracle to me.