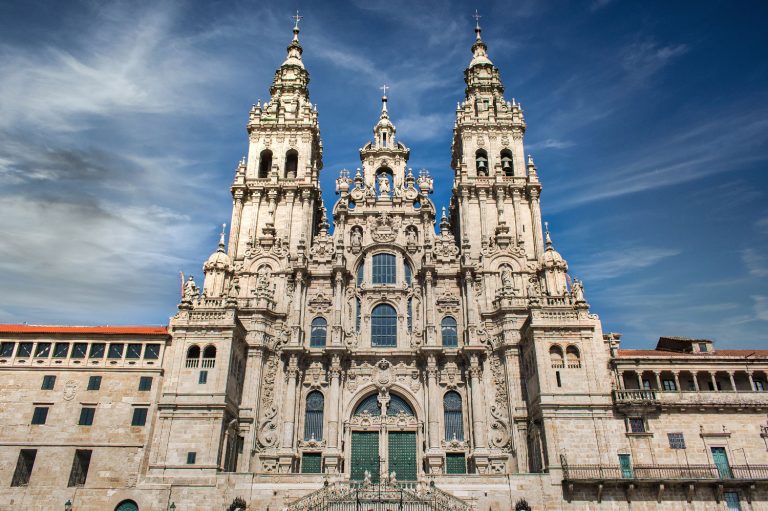 What the Pilgrims to Santiago de Compostela Taught Us About Devotion

With friends, my wife and I recently visited Galicia, an autonomous area in the northwestern part of Spain.  Everywhere in the area are signs of the “Way of St. James” (“Camino de Santiago”), a complex of pilgrimage routes that has existed since the ninth century.  All of them converge upon the Cathedral of Santiago de Compostela, which is located in the city of Santiago de Compostela, the Galician capital that grew up around the shrine.

“Santiago” is the local form of late Latin “Sanctus Iacobus” (“Saint James”; the Greek New Testament’s equivalent of “James” is “Iakobos,” while the original Hebrew name is “Ya‘qob.”) The Saint James in question is the son of Zebedee, the brother of the apostle John.  Traditions that can be traced back to perhaps AD 700 say that he preached the Gospel on the Iberian Peninsula prior to his martyrdom back in his native Palestine.

Acts 12:2 in the New Testament relates that James was beheaded on orders of King Herod (presumably Herod I Agrippa) in AD 44.  Armenian tradition says that his execution was carried out on the site where the Armenian Apostolic Cathedral of St. James now stands in the Armenian quarter of Jerusalem’s old city, and that his head is buried under that church’s altar.

However, according to Western medieval legend, his body was brought to Galicia thereafter for burial.  One version says that it was conveyed to Compostela by Christian disciples; another says that it was placed by angels into a rudderless boat that eventually came, on its own and unpiloted, to shore on the Galician coast.  And there it remained, secretly, until AD 813, when the light of an unusually bright star guided a shepherd to the site of the apostle’s grave.  After the shepherd’s story was endorsed by the local bishop and became publicly known, a cathedral was built on the spot and pilgrims began to travel from across Europe to Compostela to pay their respects to James and to have their sins forgiven.  Reverence for the holy site also bolstered European support for Galicia’s resistance to the Muslim invaders who had already conquered much of the Iberian Peninsula, and it vastly enhanced Compostela’s prestige and economic growth.

Another tradition, unattested until even later, claims that, in AD 834, James himself miraculously appeared on horseback during the legendary battle of Clavijo to fight against the Muslims for the Christian army.  Since then, he has borne the title of “Santiago Matamoros” (“St. James the Moor-Slayer”).  He is now the official patron saint of Spain.  However, I describe the battle of Clavijo above as “legendary” for good reason: It almost certainly never happened at all.

Moreover, there are excellent reasons to doubt that any part of the body of the apostle James is buried in Compostela.  In fact, there is no biblical reason to believe that he ever preached the Gospel outside of Palestine, let alone in Iberia.  (In Romans 15:20-24, for example, the apostle Paul declares his own intention to evangelize in Spain immediately after stating his refusal to do so in any place “where Christ was (already) named, lest I should build upon another man’s foundation.”  Paul wrote to the Romans after James’s AD 44 martyrdom; clearly, he knows nothing of a missionary journey by James to Iberia.  And, although stories of James as a missionary in Spain were evidently current by AD 700, though probably not before, no source prior to the 800s speaks of his burial in Iberia.  In fact, a rival tradition (likely equally baseless) places it in Toulouse, France.

Thinking of the devotion with which faithful pilgrims still walk the “Camino de Santiago” today—we saw some of them—I could not help but be impressed by their devotion, which I believe the Lord will honor even if (as I think) it is factually misplaced.  But I was also reminded of a trip that my wife and I took to Missouri several years ago because of a pair of speaking engagements.  We took the opportunity while there to visit some important Latter-day Saint historical sites.

For example, we paid our respects at the grave of John Whitmer, one of the Eight Witnesses to the plates of the Book of Mormon, in Kingston. (On John Whitmer, see my column “John Whitmer left church, but kept testimony of Book of Mormon.“). We likewise visited the monument to all eight that was recently erected where Christian Whitmer and Peter Whitmer Jr. are buried just south of Liberty. We drove by the isolated grave of Hiram Page, another of the witnesses, outside of Excelsior Springs.

In Richmond, we visited the graves of Jacob Whitmer and Oliver Cowdery in the Pioneer Cemetery, where Peter Whitmer, in whose house the church was organized in 1830, is also buried alongside his wife, Mary Musselman Whitmer. Because of her own remarkable experience with a divine messenger and the plates, Mary Whitmer can justly be called the twelfth Book of Mormon witness.

The separate Richmond city cemetery contains the graves of Bob Ford, “the man who shot Jesse James,” and Austin A. King, the tenth governor of Missouri who, while serving earlier as a circuit court judge, threw Joseph and Hyrum Smith and other prominent early Latter-day Saints into Liberty Jail. Perhaps ironically—and, without question, much more significantly—it’s also the final resting place of David Whitmer, who was the last surviving Book of Mormon witness at his death in 1888. His grave is marked by a pillar, atop which two books appear to be carved and upon which is this inscription: “The record of the Jews and the record of the Nephites are one. Truth is eternal.”

Robert Browning’s story-poem “A Death in the Desert” describes what he imagined to be the death of John, the last of Christ’s New Testament apostles, who “Saw with his eyes and handled with his hands/That which was from the first, the Word of Life.” But, Browning’s poetic voice asks, “How will it be when none more saith ‘I saw’?”

And how, indeed, was it? For roughly eighteen centuries, until the commencement of the Restoration in the spring of 1820, there were no prophets and no apostles. And the reverence given to Santiago de Compostela by hundreds of thousands of Christian pilgrims over more than a thousand years shows how badly they were missed.  But then, suddenly, through the grace of God, there were eyewitnesses again, men and women who had seen with their eyes and handled with their hands. People who knew.

Christian churches of various denominations dot the rolling landscape north and east of Kansas City.  As we drove through rural western Missouri, I noticed banners hanging at several of them, announcing tours to the Holy Land — referring, of course, to the places associated with the Bible and the life of Jesus Christ.

Now, I yield to nobody in affirming the value that a visit to biblical sites can have for faith and religious understanding; I’ve led many tours to Israel myself.  But it struck me then that the vast majority of the people in those churches likely had no idea that they themselves were already surrounded by the history and the graves of much more recent eyewitnesses who were comparable to the early disciples of Jesus. They, too, saw. They, too, knew for themselves.

And, although they encountered difficulties and eventually fell away from the Church of Jesus Christ of Latter-day Saints, they, too, remained faithful to what they had seen, bearing witness of it until (and, mentioned above in connection with David Whitmer, even beyond) their dying days.

Oliver Cowdery, for example, dissented away from Joseph Smith and was eventually excommunicated from the Church of Jesus Christ — a daring move on Joseph’s part, by the way, if Oliver had been a co-conspirator with him in fraud — but was rebaptized on 12 November 1848, by Elder Orson Hyde of the Quorum of the Twelve Apostles. Oliver wanted to move westward with the saints, casting his lot with a persecuted and homeless people, but failing health prevented him from doing so, and he died at the home of David Whitmer on 3 March 1850. Those who were with him at the end, though, unanimously affirm that he continued to declare his testimony. To Jacob Gates, for example, he’s reported to have spoken as follows:

“Jacob, I want you to remember what I say to you. I am a dying man, and what would it profit me to tell you a lie? I know that this Book of Mormon was translated by the gift and power of God. My eyes saw, my ears heard, and my understanding was touched, and I know that whereof I testified is true. It was no dream, no vain imagination of the mind — it was real.”

Oliver’s wife, Elizabeth Ann Whitmer Cowdery (1815-1892), had known him since the time when, before their marriage, he served as scribe while Joseph Smith dictated from the golden plates. “He always without one doubt,” she said of her husband, “affirmed the divinity and truth of the Book of Mormon.”

Of course, while many believers there in western Missouri surely dream of visiting the Holy Land, others almost certainly wonder whether stories of ancient revelations and long-ago miracles in distant lands can be trusted. Surrounding them, though, are the largely unnoticed graves of nineteenth-century witnesses who are every bit as significant as those ancient witnesses to the resurrection of Jesus, and whose testimonies are far more recent and far better documented.

Oliver Cowdery’s account of the resurrected John the Baptist’s appearance to him and Joseph Smith will serve to represent the many other testimonies that emerged from the remarkable early days of the Restoration:

“While the world was racked and distracted—while millions were groping as the blind for the wall, and while all men were resting upon uncertainty, as a general mass, our eyes beheld, our ears heard, as in the ‘blaze of day’; yes, more—above the glitter of the May sunbeam, which then shed its brilliancy over the face of nature! Then his voice, though mild, pierced to the center, and his words, ‘I am thy fellow-servant,’ dispelled every fear. We listened, we gazed, we admired! ’Twas the voice of an angel from glory, ’twas a message from the Most High! And as we heard we rejoiced, while His love enkindled upon our souls, and we were wrapped in the vision of the Almighty! Where was room for doubt? Nowhere; uncertainty had fled, doubt had sunk no more to rise, while fiction and deception had fled forever!”

The Parisian Cardinal de Polignac once informed the famous eighteenth-century French wit Madame du Deffand that the martyr St. Denis, the first bishop of Paris, had walked a hundred miles after his execution while carrying his head in his hand: “In such a promenade,” she replied, “it’s the first step that is difficult.”

She meant, of course, that whether St. Denis walked a hundred miles or took only a single step is immaterial. The fundamental question is whether, after his beheading, he walked at all. All else is mere detail.

The legend of St. Denis scarcely matters. But if the testimonies of these sane, honest, reputable, consistent nineteenth-century American witnesses are true, the rest truly is just detail—and the news they brought is transcendently wonderful, surpassingly important.