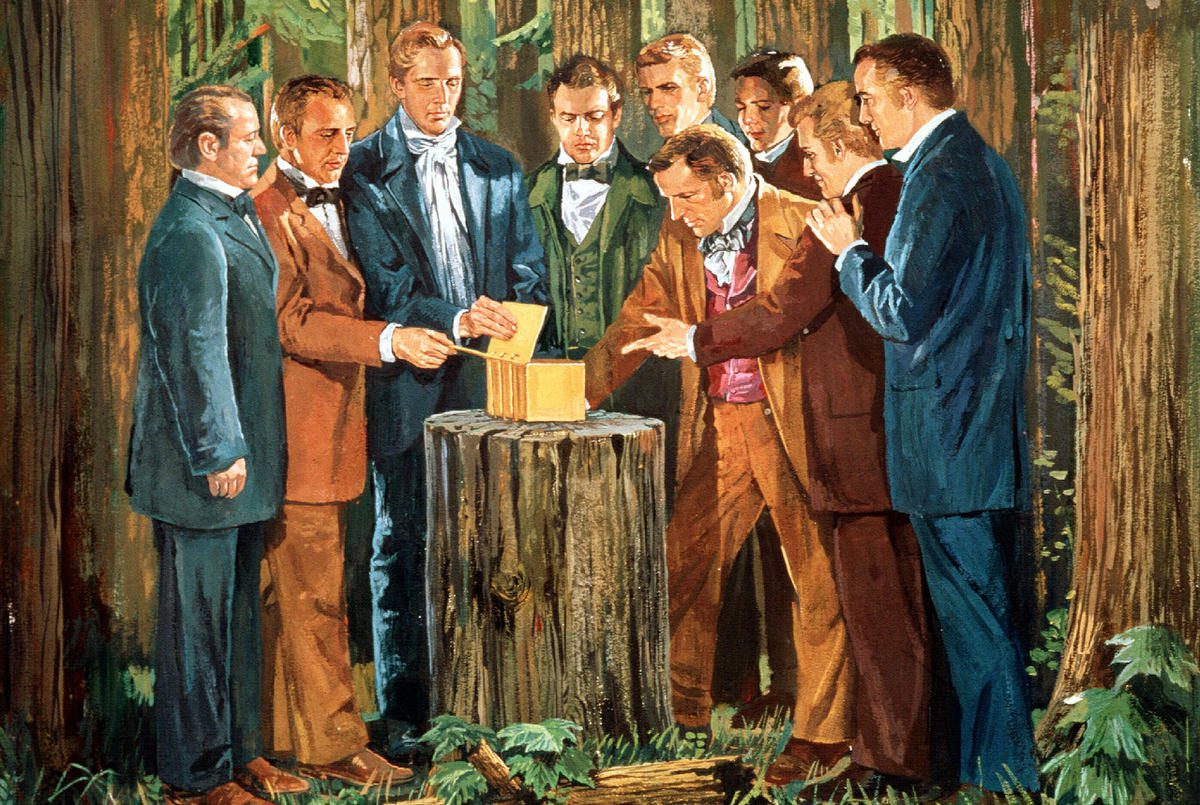 What, if Anything, Does the Testimony of the Witnesses to the Book of Mormon Prove?

A reader of this blog contended today that the testimony of the Witnesses to the Book of Mormon, even if taken at face value, would prove nothing of significance.

I commented briefly on this sort of objection in an article that appeared on 18 October 2018 in the print edition of the Deseret News and online in LDS Living:

Let’s assume, for the sake of discussion, that the declarations of the official witnesses to the Book of Mormon are true. (I’m happy to argue for their truth, but that’s not today’s topic.) What, if anything, would they establish?

Some critics correctly observe that the testimonies of the witnesses don’t, by themselves, demonstrate that ancient Nephites existed or that the plates were ancient. The Eight Witnesses admittedly testify that the plates and the engravings that they had seen had “the appearance of ancient work, and of curious workmanship.” But none of the witnesses was expert in ancient metallurgy, and, thus, their testimony on this point isn’t decisive.

However, we would be misguided if we were to conclude that the witnesses’ testimonies establish nothing of pivotal importance. The overall secular case for the Book of Mormon is a cumulative one. No single piece of evidence demonstrates everything, by itself, that believers in the Book of Mormon affirm. Many strands of data must be combined. In that cumulative case, though, the official witnesses —whose testimonies can and should be supplemented by the accounts of several unofficial but significant corroborating witnesses — are of fundamental importance

“We declare with words of soberness,” say the Three Witnesses, “that an angel of God came down from heaven, and he brought and laid before our eyes, that we beheld and saw the plates, and the engravings thereon.” And the Eight Witnesses testify that Joseph Smith “has shown unto us the plates … which have the appearance of gold; and as many of the leaves as the said Smith has translated we did handle with our hands.” “We have seen and hefted,” they said, claiming thereby to “know of a surety that the said Smith has got the plates of which we have spoken.”

At a minimum, these declarations seem to establish that Joseph Smith had a thoroughly solid set of metal plates in his possession in the late 1820s. Moreover, the witness testimonies demonstrate that the plates had a real, tangible, objective, material existence beyond Joseph Smith’s subjective imagination. Accordingly, they challenge critics to provide a plausible explanation for the origin of those plates. Who made them? When? Where? Why?

Additionally, they prove that Joseph wasn’t lying when he claimed to possess literal, physical plates.

Lucy Mack Smith later recalled her son Joseph’s return, between 3 or 4 in the afternoon, after the experience of the Three Witnesses. He threw himself down and exclaimed,

“Father, mother, you do not know how happy I am; the Lord has now caused the plates to be shown to three more besides myself. They have seen an angel, who has testified to them, and they will have to bear witness to the truth of what I have said, for now they know for themselves, that I do not go about to deceive the people, and I feel as if I was relieved of a burden which was almost too heavy for me to bear, and it rejoices my soul, that I am not any longer to be entirely alone in the world.”

Furthermore, as we have already seen twice in this column alone, the Three Witnesses testified that an angel descended before their eyes and exhibited the plates to them. As such, that doesn’t demonstrate that there were ancient Nephites or that the plates were ancient. However, it does demonstrate something even more important. Visible angelic involvement in the recovery of the Book of Mormon far transcends merely antiquarian interest, as does their united testimony that God’s voice had “declared” to them that the account engraved on the plates had been “translated by the gift and power of God.”

These are not small things. If Joseph Smith had plates that appeared to be gold, they must have come from somewhere. If a glorious and seemingly angelic being displayed the plates to them, his existence demands explanation. If an apparently divine voice testified to the accuracy and truth of the English translation of the Book of Mormon, that fact must be very seriously considered. The witness statements enhance the plausibility of Joseph Smith and the book he dictated. Eyewitness testimony to the existence of angels and of God himself is scarcely of trivial importance.

In this light, niggling criticisms that the testimonies of the Book of Mormon witnesses don’t prove the plates ancient and don’t rigorously demonstrate the existence of an ancient Nephite civilization plainly miss the point. The witness statements enhance the plausibility of Joseph Smith and the book he dictated. And eyewitness testimony to the existence of angels and of God himself is scarcely of trivial importance.

In a world that is obsessed with picking apart any claim to determine credibility, the book of Mormon still stands as a "marvelous work and a wonder" even among scholars today who are not of our faith. It can be questioned but not refuted. The three, and subsequently the eight witnesses confirm that the record (you can argue ancient or otherwise) did exist. They held the plates in their hands. Their witness testifies of the truthfulness of the record. That in and of itself is huge. If the record was real, then Joseph Smith did translate it. If Joseph translated that record by the gift and power of God, then it stands to reason that he is a Prophet. If he is a prophet, then the Church of Jesus Christ of Latter-Day Saints is God's restored church and the only true church on the earth today. God doesn't expect us to blindly believe. He has given us witnesses and evidence. And just like any jury is expected today, it is up to us to take the evidence, consider the facts, and then pray to know for ourselves.

One thing you missed is that even though some of these witnesses left the church, some never to return, NONE of them ever repudiated their witness even on their death beds. At least one did, on his death bed, confirm yet again that he saw and handled the plates. This, to me, as a convert, is a "final testimony" of the truth of their existance.