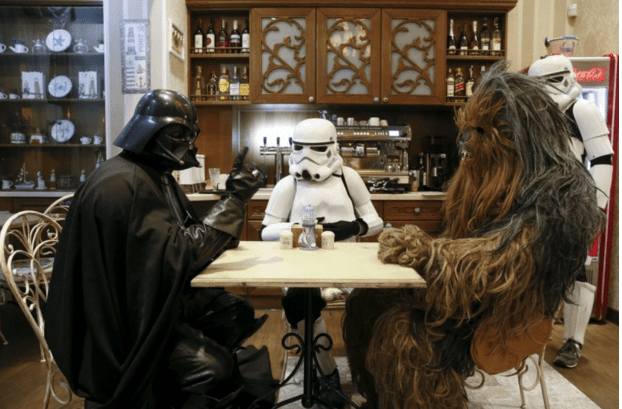 The Washington Post published an article this week exploring the reasons why Mormons have an especially strong attachment to the iconic science fiction franchise that saw another installment released this past weekend. Star Wars has apparently always had a special place in the heart of Mormons in United States, with Utah surpassing all other states in fandom. Here are some possible reasons why:

For 30 years, the church-owned Brigham Young University has held a symposium, “Life, the Universe and Everything,” focused on “all aspects of science fiction and fantasy,” where Mormon authors frequently meditate upon the relationship between speculative fiction and their faith.

In the past decade, when many evangelicals feared that the “Harry Potter” phenomenon encouraged comfort with witchcraft and Satanism, the Mormon apostle Jeffrey Holland embraced the moral example of the teen wizard. And in the present day, The Washington Post has demonstrated that Utahans seem to love “Star Wars” more than people in any other state.

There are a number of possible reasons for this fascination, from the persistent legacy of authors such as Anderson in Mormon culture to the most commonly suggested: the superficial resemblance between Mormon theology and the elements of speculative fiction. This can be taken at face value.

“Mormons believe a lot of things that are pretty fantastic — we believe in miracles and angels and ancient prophets and rediscovered Scripture — so maybe it is almost natural for us to dive into these other stories,” Mormon fantasy author Shannon Hale told the Boston Globe.

Hale’s point, however, should be taken as a beginning, not an end: “Fantastic,” after all, is in the eye of the beholder.