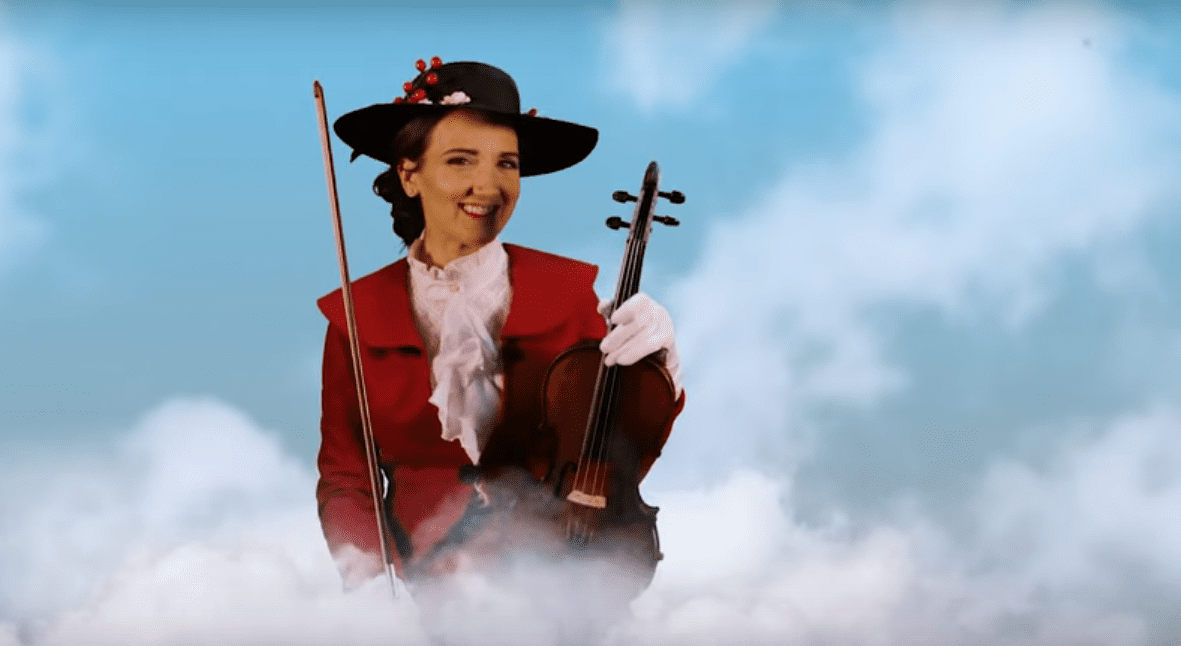 From Jenny Oaks Baker: “Our family has always loved the movie Mary Poppins and we are thrilled we were able to venture up together to “The Rooftops of London” to create this NEW Mary Poppins Music Video.”

“We also partnered on this video with the LightTheWorld effort as this week is Light Your Family.  One way our family loves to serve is through music. Through music we hope to uplift, inspire and bring joy to others.”

And with Mary Poppins in mind, here is a review of the new film, which arrived in theatres December 19:

CTR Movies Review: Mary Poppins Returns, But Should You?

Based on the stories by P. L. Travers, this lovely family-friendly film is, as Mary Poppinswould say, “practically perfect in every way.”  It has the magic, wonder, fun, style, and spirit of the original movie while providing new talent and new musical numbers. It is not a remake, but a sequel.

The 1964 Disney movie Mary Poppins became a classic and has warmed audiences’ hearts for over 54 years. That’s actually a record for the longest time for a sequel! It won 5 Academy Awards and instantly propelled Julie Andrews into an international movie star.  Emily Blunt is absolutely fantastic and worthy of holding the Mary Poppins umbrella. The Disney magic lives on.  As P. L. Travers says, it is “practical, yet magical.”

You will be delighted with the 2 special cameo performances towards the end of the movie!  I don’t want to spoil it for you, so I won’t say who they are…

Yes! While Julie Andrews and Dick Van Dyke left large shoes to fill, they have both expressed approval with this continued story. Some critics contend that the movie isn’t innovative enough like the original one was. I actually liked that it kept a period feel and matched the look and feel of the original.

The music is really great and is a beautiful mixture of sweet, melancholy, silly, and fun. I wanted to clap after many of the big musical dance numbers. I especially loved the dance number with the leeries (Lamplighters). Some of those guys were unbelievably great dancers and the scene followed the pattern of the whimsical chimney sweeps in the original movie.

The casting is great with Emily Blunt, Lin-Manuel Miranda, Meryl Streep, Julie Walters, Ben Whishaw, and the two surprises at the end. It’s impossible to not love Oscar winner Colin Firth. The children are adorable, especially Georgie. They are played by Joel Dawson, Nathanael Saleh, and Pixie Davies.

The animation scenes about the chipped China bowl were awesome and probably my favorite.  The costumes in those scenes were super cute too. I loved Mary Poppins’ shoes, gloves, and outfits. Some critics say they were too modern.  Pish posh. Meryl Streep’s costume and makeup were a bit too over-the-top for me.  She’s still awesome though.

I love Lin Manuel Miranda, but his performance didn’t pop like Dick Van Dyke’s in the original movie.  Seriously, I love him, but even his accent wasn’t very good.  He got to shine in a little rap-like song though. Unfortunately, between the quick rap style and the British accents, some of the song lyrics are so fast that it’s often hard to understand what’s being said/sung.

There are a few things in the movie that might annoy you. For example, there is a moment when you might actually say, “What? That’s ridiculous.” (It has to do with London’s famous Big Ben clock tower toward the end of the movie.) Admiral Boom’s character didn’t quite land.  Setting off booms every hour?  What neighborhood would tolerate that? In the original movie, he only shot off canons twice a day. Right, much more tolerable. Kids who haven’t seen the first movie will think his role is bizarre.

It would have been cute if this Mary Poppins said, “Supercallifragilisticexpialidocious” but she doesn’t. To make up for that missed moment, Michael said, “Let’s go fly a kite.” You’ll appreciate the line if you’ve seen the original movie. It’s sweet that they carried the kite theme from the first movie into this one. I was surprised that the closing credits were so boring, rather than decorate the screen with cartoons or cute animations.

IS IT OKAY FOR YOUR KIDS? (PG)

It’s so great to have a PG choice out there at the box office during the holidays! There is no profanity and no inappropriate images that would make parents cringe. The children are placed in some perilous situations a few times (in a dream.)

The topics are a bit dark for kids: the death of a parent, losing a home to foreclosure. I really liked “the cover is not the book” song, but was surprised that there were some subtly inappropriate jokes in it. There are some British words that a lot of Americans won’t understand. For example:  Wellies = boots (usually rain boots),  larder = food pantry, leery = a British lamplighter.

Mary Poppins teaches the children many things including:

The film deals with grief and loss. Mary Poppins sings a song with the sentiment that “You can’t lose what you’ve never lost” and “Gone, but not forgotten.” She sings about things that are gone, but still somewhere, even though we can’t see them. How wonderful it is to know that our spirits continue to live on after death!

(John 11:24) The gospel of Jesus Christ teaches us that there IS life after this one and that we WILL be reunited with our loved ones. (Acts 7:55) What comfort that doctrine is to a grieving heart. Losing a loved one is so painful. With the knowledge that we will all be resurrected, we can brush away our tears and live the best life we can without them, until we meet again.