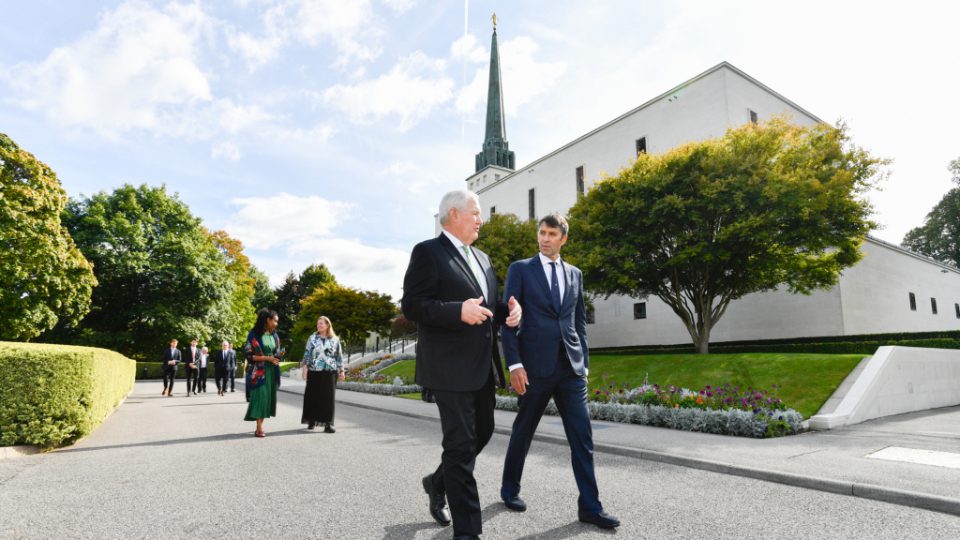 The beautiful grounds of the London England Temple, located in Surrey’s peaceful countryside, were the setting for a special visit by H.E. Mansoor Abulhoul, UAE Ambassador to the UK (September 20).

The Ambassador was taken on a personal tour of the temple grounds by Middle East/Africa North Area President Elder Anthony D. Perkins who was accompanied by his wife Christine. Elder Perkins took time in the Temple Arrivals Centre to provide additional background on the significance of temples to members of The Church of Jesus Christ of Latter-day Saints, along with an update on the temple announced for Dubai, United Arab Emirates.

“As a nation committed to inclusivity, tolerance and respect for all faiths, the UAE warmly welcomes the construction of the Church’s first temple in the Middle East in Dubai,” H.E. Mansoor Abulhoul said. “My visit to the London England Temple today offered a fantastic opportunity to discuss plans for this exciting project and engage with Elder Perkins and other Latter-day Saints in insightful interfaith dialogue.”

Dubai’s future temple was announced in April 2020, after an invitation from the Dubai government to build this holy structure. It will be the Church’s first temple in the Middle East.