To Live “As For Years” | Meridian Magazine 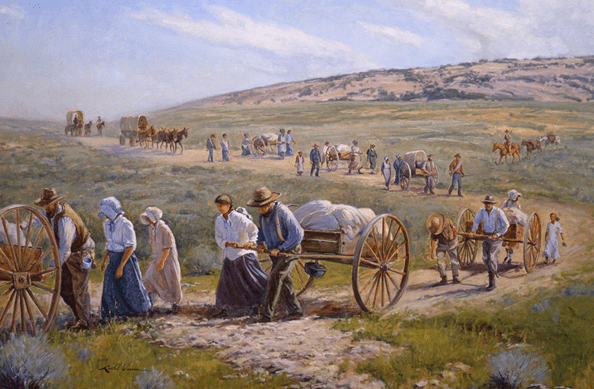 To Live “As For Years”

I chaperoned a dance several years ago at the Institute where I was a teacher. About 3000 of our students came. We had huge fans going to fight the heat but it was like taking on dragons with a fly swatter. Kids filled the halls and foyer and scrambled to the exits to find a breath of cool air. In addition the lights were, as always, dim, and the music was, as always, loud. I told the policeman we hired to come to the dance that I could think of one hundred and thirty-nine things I would rather be doing and seven of them involved dentists.

Perhaps my problem is that I am older than dirt. I am less flexible physically and spiritually than I used to be. Brigham Young said:

Our bodies are all important to us, though they may be old and withered, emaciated with toil, pain, and sickness, and our limbs bent with rheumatism, all uniting to hasten dissolution, for death is sown in our mortal bodies. The food and drink we partake of are contaminated with the seeds of death, yet we partake of them to extend our lives until our allotted work is finished, when our tabernacles, in a state of ripeness, are sown in the earth to produce immortal fruit. Yet, if we live our holy religion and let the spirit reign, it will not become dull and stupid, but as the body approaches dissolution the spirit takes a firmer hold on that enduring substance behind the veil, drawing from the depths of that eternal Fountain of Light sparkling gems of intelligence which surround the frail and sinking tabernacle with a halo of immortal wisdom (JD, vol. 9, p. 288).

The condition of my mind makes me wonder how well I have lived my ‘holy religion.’ Words like ‘dull’ and ‘stupid’ seem to be authentic descriptions of what is happening to me. And nobody is saying anything to me about my ‘sparkling gems of intelligence’ or my ‘halo of immortal wisdom.’ At least my ‘frail and sinking tabernacle’ seems to be following the prophetic path President Young described.

Of course the encroachments of age and the dissolution of the body are not sufficient excuses to quit trying. Even those with only a little time left must continue to “improve the shining moments” (hymn 226), even if most of the time they do not appear to be shining.

In that condition they came to the 9th ward. But so many came irregularly. And they had dozens of friends returning from or leaving for missions, speaking in nearby stakes. They had families inviting them home for a Sabbath reunion and Mom’s Famous Pot Roast. The presence of many of them on any given Sunday was less certain than icicles in August. They accepted callings, but a single phone call could move them in days to a new apartment in a new ward, or stake, or city . . .

My ward mission leader spoke to me one day: “I am moving in a month. In two weeks I leave for China for a little while. I thought you ought to know.” A two-week notice was very nice.

I had one young man who visited with me when he arrived and begged for a calling. We gave him one and never saw him for six months. When he returned he came to visit again. He apologized profusely, explaining at great length the unforeseen circumstances that took him away from the ward for half a year. But now he was here to stay and he had come to serve. Would we give him a calling now that he was putting down his roots? Of course. We extended a call. I never saw him again. Two callings . . . not a single day of service.

I shouldn’t begrudge them their freedoms, of course. I remember that I was pretty mobile when I returned from my mission.

But I believe there is a principle that can be applied here that is worth a careful look.

The result of that revelation was that arriving members anticipated only a brief stopover in Kirtland before continuing their journey to the land of Zion in the West.

But the Lord gave specific instructions about their time in Ohio:

And thus I grant unto this people a privilege of organizing themselves according to my laws. And I consecrate unto them this land for a little season, until I, the Lord, shall provide for them otherwise, and command them to go hence; And the hour and the day is not given unto them, wherefore let them act upon this land as for years, and this shall turn unto them for their good. Behold, this shall be an example . . . in other places, in all churches (Doctrine and Covenants 51:15-18, emphasis added).

Even though the saints would only be in the area for “a little season . . . let them act upon this land as for years . . .” What? Paint barns for others to utilize? Sew curtains to provide shade and privacy for other families? Plant crops we might never harvest? Of course! And this is “an example . . . in other places, in all churches.” Those other places and churches would include young adults and every other saint on the planet.

The message is that where we serve does not matter and how long we serve does not matter. How we serve matters. I remember reading a comment by Roger Williams, the famous pianist of the late sixties and early seventies. Someone at Utah State University interviewed him for the student paper and asked this question: “Doesn’t all this traveling and playing interfere with your life?” His answer: “This is my life.”

Songwriter and singer Deanna Edwards wrote a song about this: “Life is what happens while we’re making other plans.”

“In Doctrine and Covenants 51:16-17, the Prophet Joseph Smith received a revelation after solicitation by Bishop Edward Partridge. It appears that the Saints, after moving from place to place, wondered if they should build homes rather than simply make dugouts or live in tents during this transient portion of their migration westward. To this question the Lord answered very clearly:

“And I consecrate unto them this land for a little season, until I, the Lord, shall provide for them otherwise, and command them to go hence;

“And the hour and the day is not given unto them, wherefore let them act upon this land as for years, and this shall turn unto them for their good.”

“In any position we accept, we offer our honesty, our integrity, and our good name. We should always work, as the Lord has suggested, as if for years. It is the works that we perform that finally build what we become” (Marvin J. Ashton, “We Believe in Being Honest,” New Era, Sept. 1983, 7).

Even if we might be older than the pyramids or moving the week after next.

This scripture spoke to my heart as I entered the divorced period of my life. I felt the spirit tell me that although I didn't know how long I would be single, I should live my life, settle in and make plans as if for years. Although that wasn't necessarily what I wanted to hear, it has been a blessing to me.

Thanks for sharing this, this is a principle I think is very beneficial for us but not always remembered when opportunities for application arise. As you point out, it is especially pertinent for those of us in our YSA years. I've tried to apply this principle as I've gone through college and, while not always perfect in doing so, great blessings have come. In fact, I have a testimony that living somewhere "as for years", even if it is to only be for a few months, better prepares us to move on to the next stage in our life.