Thorns and Snares: A Lesson From the Book of Judges | Meridian Magazine 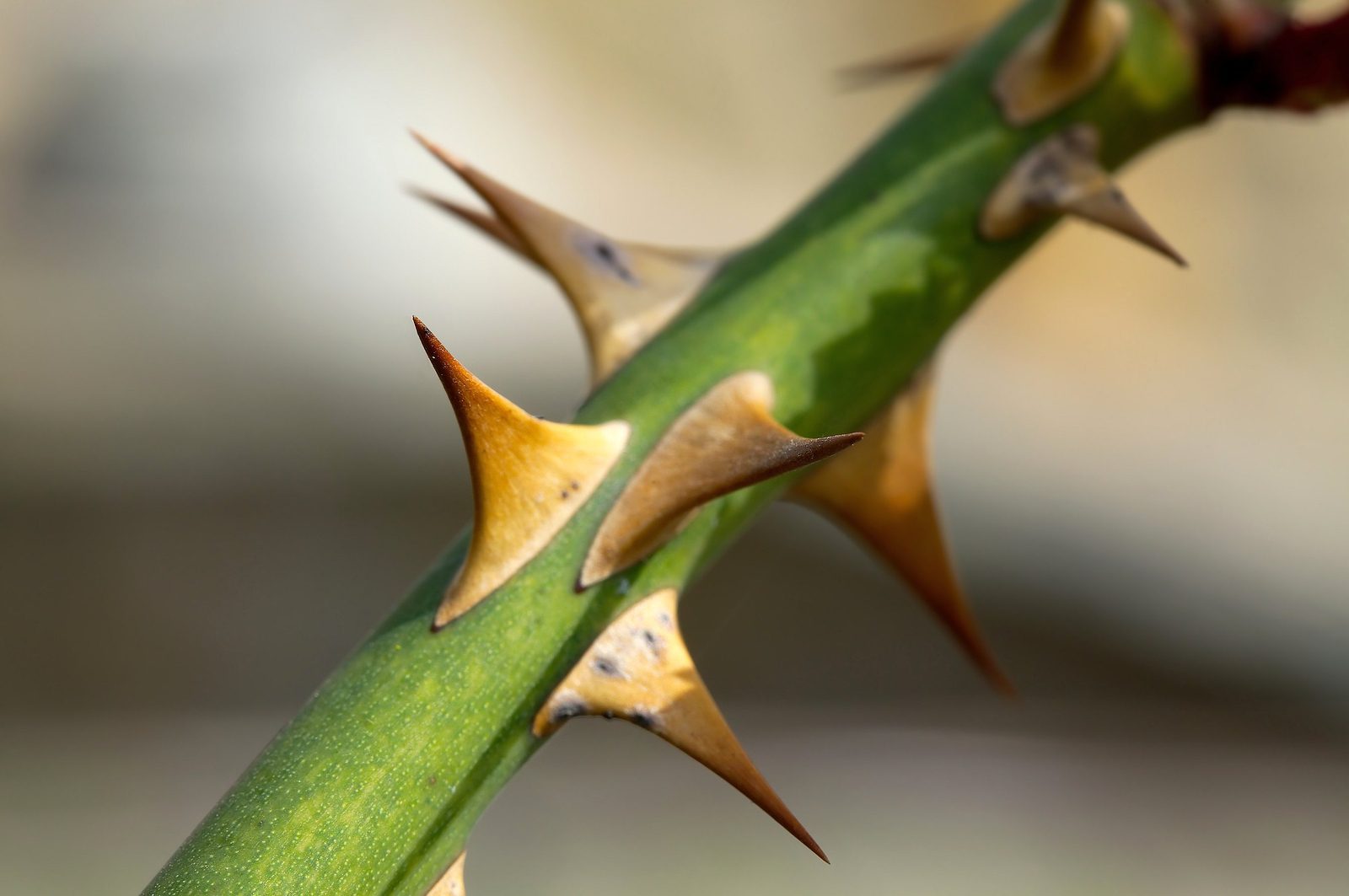 Thorns and Snares: A Lesson From the Book of Judges

I learned an important lesson from the book of Judges.

Reuben and Gad and half of Manasseh had already claimed their inheritance across the Jordan River and Levi would be scattered among all the tribes to take care of priesthood duties; thus, nine tribes. It would become the responsibility of those tribes to finish cleansing the land by conquering and driving out the remaining inhabitants, whom Nephi said “had rejected every word of God, and they were . . . ripe in iniquity; and the fulness of the wrath of God was upon them . . .” (1 Nephi 17:35).

We can see clearly how important such a cleansing would be. No one would want to raise a family in the neighborhood of people immersed in evil and fully ripe in iniquity–people worshipping idols and fertility gods and goddesses. God made his will perfectly clear:

And when the Lord thy God shall deliver them before thee; thou shalt smite them, and utterly destroy them; thou shalt make no covenant with them, nor shew mercy unto them: Neither shalt thou make marriages with them; thy daughter thou shalt not give unto his son, nor his daughter shalt thou take unto thy son. For they will turn away thy son from following me, that they may serve other gods: so will the anger of the LORD be kindled against you, and destroy thee suddenly. But thus shall ye deal with them; ye shall destroy their altars, and break down their images, and cut down their groves, and burn their graven images with fire (Deuteronomy 7:2 – 5).

This is what happened after the division of the Promised Land among the tribes:

And it came to pass, when Israel was strong, that they put the Canaanites to tribute, and did not utterly drive them out (Judges 1:28).

And the Amorites forced the children of Dan into the mountain: for they would not suffer them to come down to the valley . . . (Judges 1:34).

The scriptures alert us to this problem nine times. The Lord wanted Israel to live in an environment free from contaminating concentrations of evil that would impede the efforts of covenant people to create righteous families.

This was a major purpose of leading Lehi from Jerusalem, Nephi from his brethren the Lamanites, and Mosiah I from the backsliding Nephites. I remember when a close friend taught a lesson about this. He had a gallon-sized glass bottle. He put some greenery in it and a large praying mantis he found in the neighborhood. Then covered the bottle with a lid punctured with holes for ventilation.

During his classes, he dropped a live moth into the bottle and let the kids watch. The mantis was voracious, managing in every class to capture dinner and devour it. It was a powerful illustration of the importance of living in a safe environment.

The Lord knew what the disobedience of Israel would mean and sent an angel to explain things.

“And an angel of the Lord came up . . . and said, I . . . have brought you unto the land which I sware unto your fathers; and I said, I will never break my covenant with you. And ye shall make no league with the inhabitants of this land; ye shall throw down their altars: but ye have not obeyed my voice: why have ye done this? Wherefore I also said, I will not drive them out from before you; but they shall be as thorns in your sides, and their gods shall be a snare unto you” (Judges 2:1-3).

The words the Lord used to describe the influence of these remaining inhabitants on the House of Israel are important: “they shall be as thorns in your sides, and their gods shall be a snare unto you.”

Thorns and snares: I spent some time considering those words.

When I was in the Army at Ft. Benning, Georgia, during basic and IOBC training, we spent many nights in the woods, honing our military skills in the swamps and ravines and hillsides of western Georgia and eastern Alabama. We frequently encountered a type of vegetation which we called “wait-a-minute vines.” They dangled from the overhead limbs of trees singly or in small clusters, thin and flexible strands covered with half-inch spines. They had a ferocious appetites for olive drab clothing and unprotected skin. In the darkness in which we made many of our military maneuvers, those thorny strands were invisible. When we encountered one unexpectedly, we were compelled by pain and physiology to “wait a minute” while we extricated ourselves from this dangling agony. Those thorns always slowed us down.

That must be what the Lord meant to convey. The gods of these remaining inhabitants will impede your progression. Your journey to that heavenly land of promise will be much more difficult and will require much longer because you will be continuously entangled in the thorns and vines of these heathen religions.

The word is defined as a noun–

Thorns impede and slow progress. Snares stop progress. The residual influences of these heathen nations, the Lord warned, will cause you sorrow and continuous difficulty in your efforts to be my disciples and claim my eternal rewards. And of course they did. Seven times in Judges we are told that the Israelites “did evil in the sight of the Lord,” and served the false gods of their neighbors.

The important question arising from this lesson in Judges is: “What evils do I need to drive out of my environment?” There are some parts of our environment over which we have little control, of course. We may not be able to determine what movies play at the Cineplex, nor what bands play concerts at nearby venues, but we can do something about the stuff that comes through our front doors. We must be careful of damaging media and music and magazines, and of course computers and television. I remember hearing Elder J. Ballard Washburn say at a stake conference when he was our Regional Representative in Snowflake, Arizona, that he would rather have a live rattlesnake than an uncontrolled TV in his house. That makes sense. When there is a rattlesnake nearby, you know what the danger is.

The result of their continuous contact with this environment of evil was that the House of Israel departed from important things and embraced the culture of the heathen around them. They forsook the Lord, the way, the covenant, and the walk of their fathers.

“They turned quickly out of the way which their fathers walked in” (Judges 2:17).

“[They] transgressed [the] covenant which [the Lord] commanded their fathers” Judges 2:20).

The Lord left the heathens in the Promised Land so that he could see if Israel would continue to walk as their fathers walked (Judges 2:22). They did not.

Historically this is a tragedy. But in our own lives it is a frightening condition as well.   The destructive influences of cultural cesspools can make a shipwreck of our lives as well. We must be careful about the influences that surround us.

Of course, some of the thorns and snares may not come through the front door.

Let me give you a parable. A man built a beautiful home and furnished it with the very best . . . that money could buy . . . Then, fearful of intruders who might enter and rob him, he had installed expensive deadbolt locks . . . He put bars on the windows and doors . . . He installed costly electronic surveillance devices to turn on lights and set off alarms should any unwelcome intruder enter . . . And he smugly said to himself, “Now I am safe.”

But what he did not realize is that neither lights nor sirens nor anything of the kind would have the slightest effect on intruders of another variety who could destroy his life and the lives of his family (Pres. Gordon B. Hinckley: Ensign, Jan. 2002, 5,6).

Well written, Ted! We tend to claim that we are exempt and thus are in more danger as we expose ourselves to the shafts in the whirlwind.

I think we LDS are sometimes too sloppy in our thinking or careless with our words. For example, we talk about mortality be a "testing" period, or "God testing" us, or 'seeing whether we will obey'. If we use "test" in the traditional sense of determining what we know or will do, we are using it incorrectly. God, being omniscient, already knows our responses, so He cannot possibly be 'testing' us in that sense! Rather, He might be giving us "trials" so that we will turn to Him in humility when we realize our inability to satisfactorily manage our trials. Thus, we experience increasingly difficult trials (think of Job) to encourage our continued looking to Him for help even as we become more capable ourselves. Sort of a 'humility assurance' program. "The Lord left the heathens in the Promised Land so that he could see if Israel would continue to walk as their fathers walked (Judges 2:22)." How could an omniscient God not already know the Israelites would not obey? He DID know; therefore, this cannot possibly be the reason 'He left the heathens in the land'. He must have had another reason. What that reason is might be a question worth pondering!