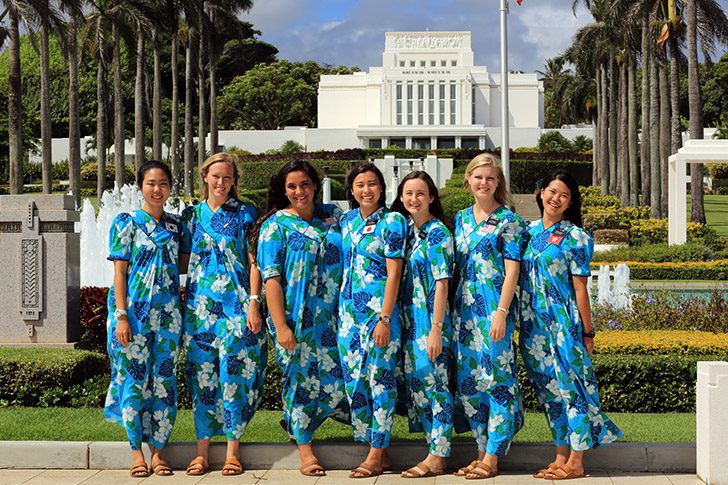 Don’t miss this remarkable story. And don’t miss the chance to win an all-expenses paid trip to Hawaii for 4! It takes 30 seconds to enter. Click here.

On the peaceful side of Oahu, in a place not very populated, are three Church-owned entities—the Laie Temple, BYU-Hawaii, and the Polynesian Cultural Center that together are acting as a quietly powerful gateway to missionary work in Polynesia and Asia.

Not very many people realize what is happening for it is a movement beneath most of our radars, but the Laie Temple Visitors’ Center is the second busiest LDS visitors’ center in the world and much of the strength of the Church in Polynesia comes through Laie.

Why Laie? It is not entirely clear, but like so many things the Lord does, it has been in the works for a long time. In fact, in 1865, Elder William W. Cluff was walking along the beach early one morning in Laie when Brigham Young appeared to him in a vision and said, “This is the place, and upon this land we will build a temple unto our God.”

To understand how unusual this is—Brigham Young was still living. At that time the Church had no temples beyond the one that had been abandoned in Nauvoo. St. George, the first temple completed in Utah, wouldn’t be announced until six years later in 1871. Hawaii was just a set of tiny islands in the most remote place in the Pacific.

Nonetheless, the Church spent $14,000, in a day when that much money was hard to come by, on 6,000 acres. The Laie Temple would not be started until 1915—but even that seems early and  unrealistic. When the Laie Temple was built the world was at war, conditions were tough, and Hawaii didn’t have a single stake.

Yet, fast forward to the present—and let’s drop into the temple visitors’ center. Something is clearly happening here. A group from the 28 sister missionaries who work here greet us in very un-missionary -like flowered mumu dresses and among them they speak Korean, Chinese, Malaysian, sign language, English and Tagalog. All those languages will be necessary for the swarms of people who come each day.

This year to August, 126,000 guests have come, generating 933 referrals, but even more telling are the 20-year graphs that show the visitors June through October. This year 97,124 visitors have come, nearly doubling the number of visitors that came the year before.

Just what is happening? According to Jeff and Heidi Swinton, who direct the work at the visitors’ center it is a confluence of events. When President Heber J. Grant dedicated the temple he said, “May all who come upon the grounds which surround this temple in the years to come feel the sweet and peaceful influence of this blessed and hallowed spot.”

Elder Swinton said, “This has been a focus for us. We all feel that if people can just step on the grounds, even if the sisters don’t spend any time with them, they will feel something different.”

One man came to Elder Swinton and said, “I just have one word. Serenity. Some places are beautiful. This place has serenity.”

Another woman was just exhausted when she came in, but as soon as she saw the Christus, she just started crying. She said, “This is exactly what I needed.”

The visitors’ center, however, also has the advantage of the Polynesian Cultural Center feeding guests their way. Alfred Grace, President and CEO of the PCC said that their visitor numbers are around 700,000-800,000 a year and a significant portion of them will take the Laie tour which includes a visit to the Visitor’s Center.

People come to the PCC and they are met with these fresh-faced Mormon students who are courteous, kind and friendly—traits which sometimes seem in shorter and shorter supply these days—and they are frankly impressed. The PCC does not proselytize in any way. It is meant to be a tourist attraction and a means for international students to afford an education at BYU-H, but as Teddy Kolleck , mayor of Jerusalem once said of the BYU students at the Jerusalem Center, “what are you going to do about the light in their eyes?”

This year the PCC agreed to give out pass-along cards inviting people to come and see the temple and the visitors’ center. Until this year, the PCC had only two trams which took tourists on a tour to the visitors’ center—with each holding about 30 people.

They contacted a Latter-day Saint who owned these buses to see if they could be used during their idle hours in the evening. He agreed—and suddenly, this year two trams and two buses are operating, bring new groups of tourists frequently to the center, with tours arriving every 20 minutes in the evening.

Then another breakthrough occurred—again exploding the number of visitors who would come each day. The Swintons noticed that occasionally a tour bus would stop by the center. The people got out long enough to snap a photo and then were quickly on their way.

These were the buses filled with Chinese visitors who were on their way to the mainland. They stopped off in Oahu to have their own quick, one-day Hawaiian experience, driving around the island on the Kamehameha Highway and then fly on.

When the buses stopped, the Swintons went out to chat with the bus drivers. “Don’t you want to park in our parking lot?” “Can we?” they asked. “Yes.”

Elder Swinton said, “I asked one bus driver—‘don’t you want to come in and use our restrooms?’ ‘You have restrooms?’ he asked. He got off the bus and within ten minutes he was sitting in front of the Christus.”

Clean restrooms and a place to stop mean much to bus drivers taking tourists—and the word spread that the LDS Visitors’ Center was the place to find these.

“Now we get 8 to 12 buses a day stopping here,” said Elder Swinton. “Yesterday we had 210 mainland Chinese visitors. Think of the ramifications of that. Otherwise they have no exposure to religion—and certainly not our church. But here the Chinese can come and have that experience.

“The drivers are typically Chinese, but they come from Taiwan or Hong Kong—from places where they have had a little more religious freedom and they are anxious for the people behind them on the bus to be exposed to American freedom of religion and so they pick this as a place to stop. We give out probably a case of simplified Chinese versions of the Book of Mormon every day.”

“When they get their copies of the Book of Mormon,” said Sister Swinton, “they hold it close and then turn it around and want a picture with that too. They can take one religious book back into their country, and it is often this book.”

Elder Swinton said, “We were praying for a way to keep our sisters busier in the afternoon and we were focused on how to get more people here on the trams—and God sent us Chinese buses. We know there are more people out there. It is just so thrilling to see people’s lives being touched.”

“We will see many people this year, and the majority are Asian. They are coming here and feeling something and leaving their information,” said Sister Swinton.

“800,000 people come to the PCC each year, and it is our mission to support bringing those people over here.”

The Swintons are watching it happen before their eyes. They ask themselves often, why does Laie have this remarkable, early and prophetic history in the church? Some of the answers to this question are coming together as they watch the faces of the thousands coming to the visitors’ center.

Win a free trip to Hawaii for 4—including airfare, food, everything! Enter by clicking here.

Our home teachers shared a story of a Japanese Pearl Harbor dive bomber. He had one last bomb left and spotted the temple and decided that should be his last target. He tried several times but the bomb would not drop, and his guns would not respond either. As a last resort he decided to dive his plane into the temple but the controls would not respond. As he left to head back to the ship he tried to turn back and try one more time but the controls would not let him turn back. Over the ocean he tested his plane again, all the controls worked just fine, the guns worked, and he dropped the bomb into the ocean. This temple and all the temples are truly blessed and protected by the powers of heaven.