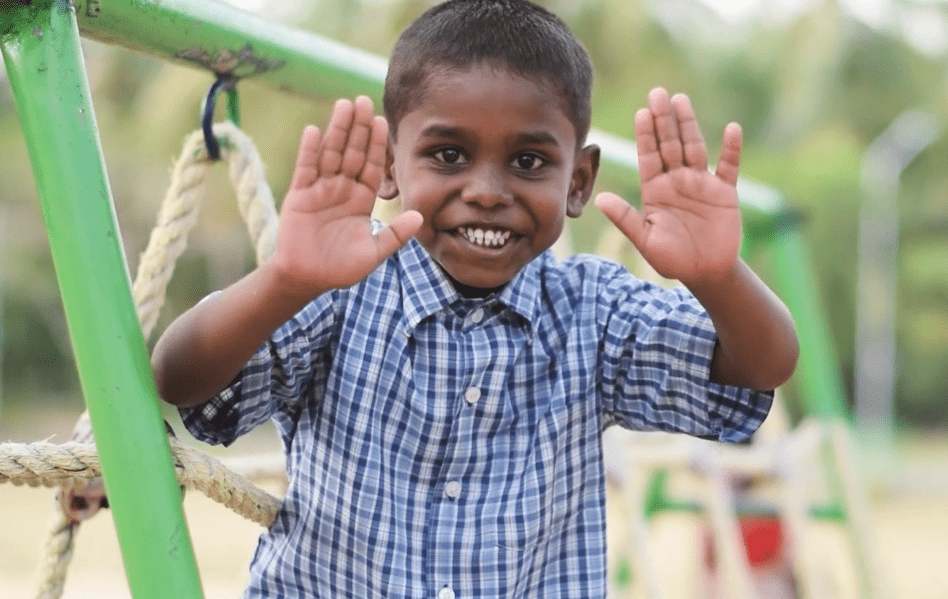 The Remarkably Small Interventions on which Lives Can Turn

To help with the efforts of Rising Star Outreach, click here.

Dharma glared at the boys surrounding him. One more time he had attacked and hurt one of the other boys in the school. This time, they had had enough, and they banded together to stop the abuse once and for all. They closed in on him, angry and determined to make him pay for his cruelty. A couple of them had picked up sticks and were brandishing them threateningly. His eyes searched desperately for his older brother, Devendran. Surely Devendran would come to his rescue, but Devendran could sense that there was a united effort this time against his brother. Knowing that there was equal resentment against him, he also felt the personal threat. He slinked off to watch the scene from behind a bush.

These two brothers, ages five and six, had terrorized the children in our program from the day they had entered the pre-school. You might ask what kind of damage two small kindergarten boys could have possibly done to bring about this confrontation?

The brothers had come from a very abusive home. Their father was not only violent, but sadistic as well. They had lived lives of literal hell at home from the time they were born. Five or six years of brutal abuse can cause a hardening and shrinking of a vulnerable, tiny soul. The abused become abusers.

The brothers had been dropped off at our school by their mother, hoping that this new environment would be a protection for them against the horror at home. They felt abandoned. They were seething with anger. And they quickly turned the abuse they had learned personally at home, against the other children.

It reached a critical point where we felt that we had to decide whether we could allow these boys to continue to stay at Rising Star or did we need to send them back home? Either decision felt impossible to make, so we did what normally indecisive people do—nothing. We let them stay—unwilling to send them back to more abuse, yet not knowing how to protect the other children. Sadly, instead of getting gradually better, the problems escalated.

We were at our wits end and emotionally torn between the good of these two brothers, and the need to protect the other small children at the school.

Just at this point we had a young volunteer named Justin come to work with us. Almost immediately we noticed the behavior of these two little hellions beginning to change. Instead of being totally disruptive in the classroom, they began to participate in the games and learning exercises. Instead of fighting school, they began to look forward to school. Most markedly, their aggressive behavior against the other children began to diminish remarkably.

I noticed that they always hung close to Justin when he was at the children’s’ home or the school. In fact, they almost seemed inseparable with him. They seemed to hang on his every word. Over just a few weeks they had become visibly calmer, less agitated, and significantly less aggressive.

We all noticed it and wondered what on earth could have caused such a turn-around in such a short period of time. As Justin prepared to leave the volunteer dorm one morning and go over to the school, I pulled him aside and asked him what his magic was? He smiled and told me it was all very simple. He pulled out of his pants pockets two pieces of candy. He said, “I always come with two treats in my pockets. When I saw how disruptive Dharma and Devendran were, I started by pulling the brothers aside and telling them how special they are. Because they are so special, I had a special treat for them. They were not to tell the other children. It was just to be our secret.

Then, within a few days I started adding when I gave them the treat that I thought they were really the smartest boys in the school. I complimented them on how fast they were learning their alphabet sounds. Suddenly they became determined to prove to me that they really were the smartest. Instead of disrupting class, they eagerly tried to learn more and more phonics.”

The change had started! It took a while. I think that Justin stayed with us for close to a year. By the time he left, the two brothers were model students and had even made some friends. Two daily pieces of candy and a few carefully chosen words of validation and love—had created a miraculous change.

Later as our students got older and our school got bigger, we faced other similar situations. I watched this same magic occur once again in another student named “Kumar”. Also from an abusive background, he was an angry loner; withdrawn and sullen. He morosely sat through classes with a wooden face, vehemently refusing to join in.

We had a volunteer come to the campus—Ron. Ron was a very successful businessman. He was also a whole lot of fun and the students immediately gravitated to him out on the playground. Ron noticed that Kumar hung back, eyes downcast. When invited to join in, Kumar shrugged, turned around and walked away. Ron decided then and there that he and Kumar had a lot in common. Ron had also been an orphan at one time in his life and had come from an abusive foster home. He knew the inside feelings of self-doubt and even self-loathing. He knew how desperately wanting to fit in, could actually cause anti-social behavior because of feelings of unworthiness—a hollowness of soul.

Ron began to do a similar thing with Kumar that Justin had done with Devendran and Dharma. He spent special time with Kumar, always seeking him out to walk to and from the school, sitting next to him at lunch, asking his thoughts. He asked to be Kumar’s tutor. He commented to Kumar over and over again about how smart Kumar was! How quickly he picked up concepts! How cool he was! He told Kumar that he was going to request that he be allowed to be Kumar’s sponsor, because he believed Kumar had so much potential and was a kid who was really going to go somewhere in life. And guess what? The same miraculous transformation began to manifest.

Ron returned to campus multiple times and each time it seemed that Kumar had a jumpstart up to the next level of performance. Every time I heard that Ron had returned to campus I wanted to run up and hug him and thank him for caring so much. I might add that plane trips to and from India are expensive and taking time off from running a business also had to be a great sacrifice. But what a difference this man has made in the life of a troubled young man!

Kumar has now graduated and is in college. None of us would have given a plugged nickel for that possibility before Ron had come to campus! The fun part is that this is just the beginning of the story. Kumar will eventually marry and have children of his own, whose lives will be vastly different because a businessman took time to help their father. Their children will eventually marry and have children. They also will be on a completely different trajectory in their lives, than if their grandfather, coming from an abusive environment in a leprosy colony, had not had his life turned around. Like ripples spreading out from a stone tossed into a pond, the effects of this one changed life will echo through generations.

I am certainly no child psychologist, but I have witnessed some interesting things over the years of working with marginalized and extremely disadvantaged children from the leprosy colonies of India. I have seen caring and loving attention literally do the impossible with a difficult child. I have learned that many of the most exasperating kids are kids who have come from very damaging childhoods and are kids who are hurting. I have realized that belligerence and pain are oftentimes closely related. And I have watched love, carefully and consistently administered, be the balm that healed the inner wounds.

Perhaps each of us could be a little more attuned to the inner struggles of those who seem unpleasant. Mother Teresa taught a sublime truth when she said simply, “Kind words can be short and easy to speak, but their echoes are truly endless.” The next time we have to deal with a difficult or disruptive child in a Primary class, or a Young Women’s class or a in a Scout troop, instead of reacting with frustration, let’s send the unmistaken message, You are special to me, I like you, and I believe in you! Hopefully we can remember the power of encouraging words, and maybe even two pieces of candy!

To help with the efforts of Rising Star Outreach, click here.

Love this! Inspiring as always, thanks Becky

I have supporter a child there for several years. Becky is a miracle worker and this rose from her own pain. God bless you Becky!