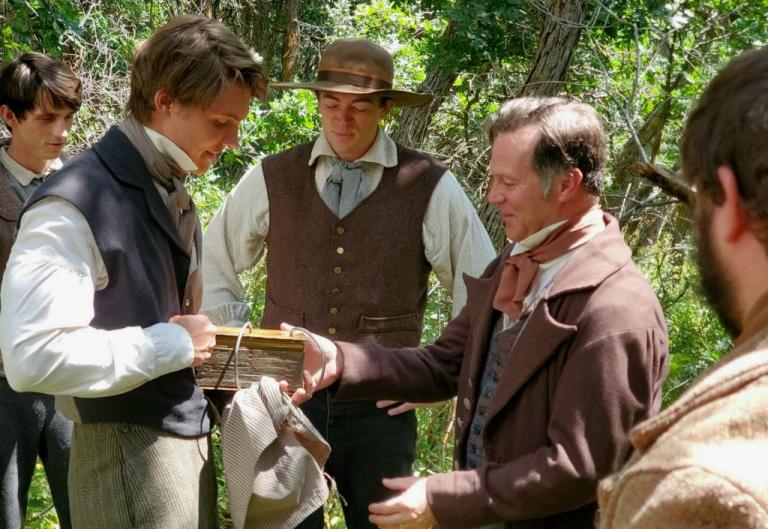 The reliability of eyewitness testimony and the Book of Mormon

Cover image: The experience of the Eight Witnesses as recently re-created for the documentary portion of the Interpreter Foundation’s forthcoming “Witnesses” film project, in a still photograph by James Jordan.

From time to time, when I’m commenting about the witnesses to the Book of Mormon, a critic of the Church of Jesus Christ of Latter-day Saints will respond with a dismissive and vague remark about the well-known weaknesses of eyewitness testimony.  Now, it has always seemed obvious to me that such responses are transparently ad hoc, that such comprehensive rejection of eyewitness accounts is only selectively invoked:  Nobody can really live a life based on the notion that his or her memories are wholly unreliable and that what he or she sees is always illusory or impossible to accurately interpret.  If, in the middle of our conversation, such a skeptic were to see me suddenly take a sledgehammer to the windshield of her car, that skeptic would not simply stand there paralyzed, wondering whether I was really smashing the window of her car, reflecting on the vagaries and limits of human memory, unable to intervene or to call the police because, after all, well, our perceptions and our memories are so hopelessly muddled.

In the past few days, I read a few short items on the limitations of eyewitness testimony in order to get myself into a proper frame of mind for interviewing a former United States attorney and a former federal magistrate judge on the topic for the Interpreter Foundation’s Witnesses film project.  I’ll use three of them here:

The problem of the unreliability of eyewitness testimony is a real one.  As Hal Arkowitz and Scott O. Lilienfeld put it for Scientific American, “Since the 1990s, when DNA testing was first introduced, Innocence Project researchers have reported that 73 percent of the 239 convictions overturned through DNA testing were based on eyewitness testimony. One third of these overturned cases rested on the testimony of two or more mistaken eyewitnesses.”  And, significantly, “most studies indicate that highly confident eyewitnesses are generally only slightly more accurate—and sometimes no more so—than those who are less confident.”

The ever-recurring name in connection with the scientific investigation of this subject is Professor Elizabeth Loftus.  She is particularly focused on questions of memory:

“Many people,” write Arkowitz and Lilienfeld,

believe that human memory works like a video recorder: the mind records events and then, on cue, plays back an exact replica of them. On the contrary, psychologists have found that memories are reconstructed rather than played back each time we recall them. The act of remembering, says eminent memory researcher and psychologist Elizabeth F. Loftus of the University of California, Irvine, is “more akin to putting puzzle pieces together than retrieving a video recording.” Even questioning by a lawyer can alter the witness’s testimony because fragments of the memory may unknowingly be combined with information provided by the questioner, leading to inaccurate recall.

Arkowitz and Lilienfeld continue:  “Many researchers,” they observe,

have created false memories in normal individuals; what is more, many of these subjects are certain that the memories are real. In one well-known study, Loftus and her colleague Jacqueline Pickrell gave subjects written accounts of four events, three of which they had actually experienced. The fourth story was fiction; it centered on the subject being lost in a mall or another public place when he or she was between four and six years old. A relative provided realistic details for the false story, such as a description of the mall at which the subject’s parents shopped. After reading each story, subjects were asked to write down what else they remembered about the incident or to indicate that they did not remember it at all. Remarkably about one third of the subjects reported partially or fully remembering the false event. In two follow-up interviews, 25 percent still claimed that they remembered the untrue story, a figure consistent with the findings of similar studies.

As the “Skeptic’s Dictionary” puts it,

A false memory is a memory which is a distortion of an actual experience, or a confabulation of an imagined one. Many false memories involve confusing or mixing fragments of memory events, some of which may have happened at different times but which are remembered as occurring together. Many false memories involve an error in source memory. Some involve treating dreams as if they were playbacks of real experiences. Still other false memories are believed to be the result of the prodding, leading, and suggestions of therapists and counselors. Finally, Dr. Elizabeth Loftus has shown not only that it is possible to implant false memories, but that it is relatively easy to do so (Loftus, 1994). . . .  Memories that have been directed by dreams or hypnosis are notoriously unreliable. Dreams are not usually direct playbacks of experience. Furthermore, the data of dreams is generally ambiguous. Hypnosis and other techniques that ply upon a person’s suggestibility must be used with great caution lest one create memories by suggestion rather than pry them loose by careful questioning. . . .  Furthermore, memories are often mixed; some parts are accurate and some are not. Separating the two can be a chore under ordinary circumstances.

Plainly, the proper response to an eyewitness account isn’t uncritical acceptance.  But neither is uncritical rejection the optimal reaction.  As the Association for Psychological Science notes,

Memory doesn’t record our experiences like a video camera. It creates stories based on those experiences. The stories are sometimes uncannily accurate, sometimes completely fictional, and often a mixture of the two; and they can change to suit the situation. Eyewitness testimony is a potent form of evidence for convicting the accused, but it is subject to unconscious memory distortions and biases even among the most confident of witnesses. So memory can be remarkably accurate or remarkably inaccurate. Without objective evidence, the two are indistinguishable.

One important aspect, of course, is the nature of the claimed memory.  If a friend remembers that she grew up in rural Arkansas or that she ate oatmeal for breakfast, we have little apparent reason to doubt her memory.  Such things are commonplace and noncontroversial.  If, however, she recalls playing Parcheesi with Miss Elizabeth Bennett and a talking unicorn named Mr. Darcy on Pandora, the lush habitable moon of a gas giant in the Alpha Centauri star system, we might be more resistant to her claim.

“Assuming that if you can’t disprove that a patient was abducted by aliens, then he probably was, is not a good enough reason,” notes the “Skeptic’s Dictionary.”  “A responsible therapist has a duty to help a patient sort out delusion from reality, dreams and confabulations from truth, and real abuse from imagined abuse.”

So how would we go about evaluating the strength or weakness of the testimony of the eyewitnesses to the Book of Mormon?  Obviously, their cumulative claim –involving divinely-supplied plates of gold and, in three cases, an angel, the voice of God, and other mysterious objects — is quite a bit more “out there” than a claim of having enjoyed a breakfast of blueberry pancakes, so our standard has to be rather high.

It’s helpful, though, that Arkowitz and Lilienfeld, writing for Scientific American, have provided a checklist for the possible weaknesses in forensic testimony:

A number of factors can reduce the accuracy of eyewitness identifications. Here are some of them:

How do these apply to the case of the Book of Mormon witnesses?

The question at issue with the above list is always about the specific identity of the perpetrator of a crime, not about whether a crime was committed.  A person in whose face a pistol was brandished might well be unable to identify the brandisher of the pistol, but won’t likely be confused as to whether or not a gun, situated only a few inches away, was aimed at her face.  She won’t wonder whether it was a gun being pointed at her or a poem being recited in her presence, or whether anything happened at all or whether any other person was even present.

Please note, too, that neither the Three Witnesses nor the Eight Witnesses nor the informal witnesses to the Book of Mormon were children whose memory-forming capacity was still developing.  (The hippocampus — the portion of the brain thought to be responsible for memory-formation — doesn’t mature until about age seven or so.)

There’s much more to be said about this subject, of course, but that will have to suffice for now.

It's like comparing apples to oranges to evaluate recall having witnessed a crime, accident, or some other worldly event to recall of something spiritual. Holding the gold plates from which the Book of Mormon was translated and undoubtedly discussing it with the other witnesses is not the same thing as having an accident or crime unexpectedly flash before you! The metal plates did not 'flash' past unexpectedly; they were examined and touched for a period of time. They were anticipated, not a surprise event like an accident or crime. I'm sure seeing and handling the angel-accompanied and provided plates had an indelible spiritual component. Having had spiritual witnesses myself while investigating the Restored Gospel, all the research for court-related gamesmanship is irrelevant to me. Besides, the Lord didn't intend the existence of witnesses to prove anything! The witnesses exist merely to encourage doubters, like I was, to experiment by asking Him. His witness is reliable!