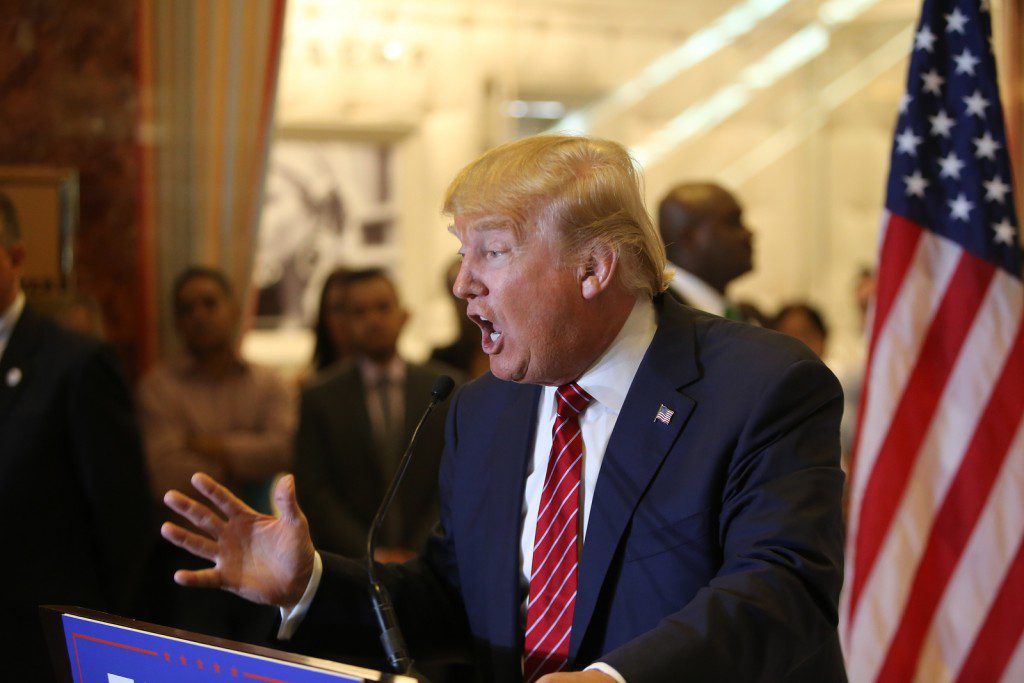 The Real Trouble with Trump

The trouble with Trump is not his bombast nor his name calling nor his choice of inflammatory topics. People get over that. Nor is it his policies. Currently, his critics who call him names about his desire to temporarily halt Muslims from coming to America until the US visa process becomes far less porous have no viable proposals to solve the wolves-among-the-lambs scenario we now face.

But, agree, disagree with those or whatever the next conflagration of thought is; it doesn’t matter. The trouble with Trump is his entertaining personality, his flamboyance that attracts people and his ability to articulate what is bothering so many Americans. With those qualities he could very well ride the White Horse into the White House.

So what is the problem? The White Horse. In times of trouble the electorate or the masses seek an end to the tribulations by rallying around the person riding the white horse, a symbol of dynamic victory. They decide that because of the person’s charisma, dynamic influence and staunch stances against the status quo, all problems will soon be solved when the emperor mounts the steps to the Senate and declares it is a new age.

In the rambling rhetoric of the man on the white horse people find great comfort – and I say man because with the exceptions of Boudicca of Britain, Rebecca of Judah and three or four others no one has heard much about, women do not ride white horses to victory although Joan of Arc tried and died. That’s because the rhetoric is so wide, so rambling that the masses can begin with the white horse leader’s language and then fill in the massive gaps with their own language. God said he created man in his own image. The masses create white horse leaders in the masses’ own image.

We saw it with Barack Obama. Vacuous promises of hope and change were voids filled in by the yearning masses.

Donald Trump is another Barack Obama. In fact, Obama created the vacuum for Trump to fill. And that’s the problem. When a leader comes to power by way of an excited electorate that has created a candidate in their own image, they are soon met by the reality that they’ve elected him president, not emperor. The proletariat cravings that got Obama’s electorate excited were the cravings for sweeping benefits for themselves and massive changes to the American political landscape. It didn’t happen because it couldn’t happen. Obama is president, not emperor, executive orders not withstanding.

Yet Trumpians expect that when the emperor stands on the Senate steps, the Senate will acquiesce to all he asks. Emperors don’t ask, they tell. But Senators, Congressmen, and bureaucrats just yawn at dictations and go about their business.

“Ah, but Alexander cut through the Gordian knot bureaucracy with one fell swoop of his sword!”, they say. True. Welcome to the world of non-sequiturs. Trump has no such sword, nor do we really want him to have it. That’s why we got rid of George III. Hence a written constitution limiting powers.

Trump has had only the powers of the free market, the will of bureaucrats opposing him, and the stubbornness of reality. All could bend to his strengths. He could buy off politicians and admits to openly donating to any political party if it could be swayed by him. As president, pay offs are still available in the form of pork barrel spending granted to a senator for his or her vote. Trump will use those freely. Bribes to foreign governments in the form of aide and professed alliances will be used. But when those alliances need Trump, the wheeler dealer may be off on another deal and will sell out to whoever is on the other end of his latest deal.

A president with no real deep seated convictions is prone to do such things. So is a president like Obama who has an ideological agenda… the metaphysical results are the same although the destiny of America can be changed by either.

Ronald Reagan was blessed with an agenda that was clear – stop communism. He believed it and as president could move voters to believe he meant what he said. He followed it up knowing his base was 100% behind this noble goal. Reagan tried the same tactics – cool persuasion, intelligent argument, persistent prodding – with Tip O’Neil and the Democratic congress to get tax cuts and spending cuts. He could only manage tax cuts and never reduced spending, just the rate of increase. Presidents are not emperors after all.

Should Trump become president, and as of this date that is clearly a distinct possibility with Hillary ready to implode with yet another revelation of corruption and no viable options from the left to oppose Trump, he will find the constitutional straight jacket he’ll wear to be none too comfortable – too confining. Then he’ll do what Jefferson did with the Louisiana Purchase – create powers heretofore unknown to the constitution or the presidency.

He will also willingly sell out his supporters because in business negotiations, of which Trump is a master, you know half a loaf is better than no loaf. So you compromise. This country was founded on compromise when John Adams and Benjamin Franklin, two staunch abolitionists, allowed objections to slavery to be omitted from the Declaration of Independence in return for the Carolina states’ support.

These great Americans, Adams and Franklin, reasoned that as repugnant as slavery was, they could never get rid of it until they had a country. So they voted for American independence first, and then went to work on the abolition of slavery. Trump will find opportunities for his “making America great again” agenda but will find he’ll have to trade votes for this agenda and sell out on issues like abortion, family rights and other social issues to get the “great again” issues passed. The purists on the right who now support him will be apoplectic.

He will be tough with ISIS, China and Mexico. He’ll likely find himself in a trade war of paralleled proportions because China IS governed by a defacto emperor and the leader and his gang can do as they please, unrestrained by a constitution. Mexico will be buoyed by China and soon ally themselves with China against the USA. Trump will fight back by attacking ISIS – deflection and inference are always good negotiating tactics.

Immigration will haunt him. He’ll want illegals to come in legally. They won’t until companies stop hiring them and getting companies to hire more expensive gringos who won’t do the dirty work will be a Gordian knot he can’t cut on day one. Building a wall will be easy compared to getting Congress to pass the funding for it. Bush wanted a wall. So did Clinton.

But who would vote for funding? Congress is not housing stupid people as Trump claims. Key votes will need to be bribed and they’ll hold out for the best deal. They’ve been insulted by him and will make him pay for his insolence to the establishment.

Trump will go crazy and will try to be Reagan and go over the head of Congress. That won’t work because Congress can deflect responsibility through endless sub-committees until Trump busts the budget and doles out pork in record amounts. The real cost of the wall will be 10 times the brick and mortar required. And he will NOT have solved the source of the problem – fellow business leaders needing cheap labor.

With no stated ideological agenda except “Making America Great Again,” Trump will find homegrown allies tough to come by. They won’t know if they are on the In or the Out, even if they’re currently In.

Trump will discover that while Americans wail about “do nothing politicians” we actually prefer them to politicians like Obama who go around creating new laws, entitlements, rights and objectives.

Alas, the white horse will turn grey and the masses will turn against Trump as a turncoat, a phony who speaks loudly and wields a little stick. Trump is smart, and may learn to go against his instincts and start creating allies now instead of enemies. Don’t count on it. A warrior atop a white horse can only hear the roar of the crowds, not sound of the barbarians inside the gates.

This seems to be a very politically partisan article, though the observations about Trump are valid. He's seen as a buffoon by many of us overseas, but as with the emporer with no clothes analogy, a dangerous one if he gets to be leader of the free world. The unabashed hatred of Obama by the Republication party (to a man it seems to us) has held America back in the attempt to build a better country than it already is. It seems that no matter what he proposes, it's rejected! I wouldn't be surprised if Obamcare isn't dismantled in due course. Everyone's entitled to good ideas and in an ideal world the elected representatives should vote on its merits, not by which way a lobbyist or pork barreling leads. The inspired words of the founding fathers are long gone at least in the sense of the original intent. It's as true in Joseph Smiths time as it is today.

"...and the GOP's (and our) main goal has to be beating HIllary, and Trump is the only one who can do it." That notion puzzles me, since polls show that Trump is the one Republican candidate who *would* lose to Clinton. But then I'm seeing a lot of self-deception on the part of Trump supporters.