The Enduring Nature of the March for Life | Meridian Magazine 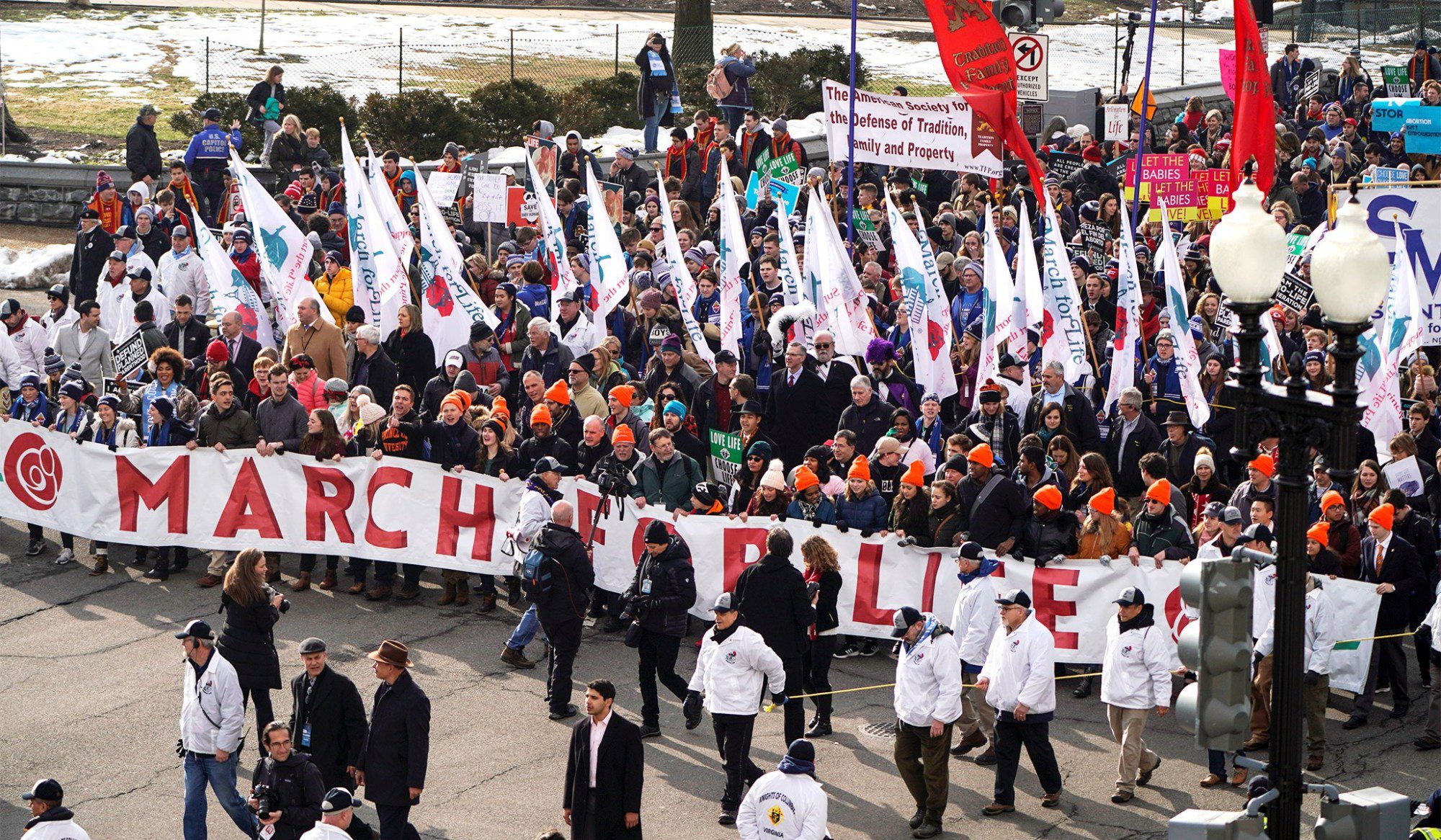 The Enduring Nature of the March for Life

January brings two marches to Washington D.C. and around the nation. This year, the two groups met on consecutive days. The Women’s March, held this year on January 19, first appeared as a protest following the inauguration of Donald Trump to the presidency two years ago. Who could miss the pink hats, the signs and costumes made to represent female genitalia, or the “#resist” banners?

For the last year, the national organization for the Women’s March has been plagued by allegations of anti-Semitism and mismanagement, which has led to state organizations denouncing the national group and posting disclaimers on their websites denying any affiliation. Partner organizations are down as are donations. It would appear that, while a sizable number of women showed up for demonstrations this year, attendance was sharply down from previous years.

Forty-six years of the March for Life

The other January march in Washington is the annual March for Life. It was held on January 18. For 46 years, the March for Life has served as a remembrance of January 22, 1973 – the day when the Supreme Court legalized abortion in all 50 states in the U.S. In October 1973, organizer, Nellie Gray, joined with other pro-life leaders who feared that January 22 would lose its significance in the minds of the public. They wanted an event that drew attention to the way legalized abortion had harmed women and taken babies’ lives over the course of the year. Since then, pro-life activists have gathered in Washington D.C. to “witness to the truth concerning the greatest human rights violation of our time, legalized abortion on demand.”

Organizers originally thought that the march would be a one-time event, but lack of action on the part of legislators to protect the unborn prompted Nellie to repeat the march every year. What started as a small movement in 1973 has grown and developed over the 46 years since the passage of Roe v. Wade.

Since then, over 60 million babies have been aborted in the United States. Close to that many babies are aborted every year worldwide. It’s hard to see a silver lining when confronted with the reality of those numbers. The equivalent of 18% of the current U.S. population has been aborted since 1973. That’s the same as the combined populations of California and New York. Yet there are some signs of hope, and those signs indicate a shift in attitudes towards abortion on demand.

The CDC reports that between 2006 and 2016, the total number of reported abortions decreased by 24 percent. Chuck Donovan is the president of the research group associated with the pro-life Susan B. Anthony List. He says that any decline in abortion rates “of this size and duration has many causes. Among the most salient: a higher percentage of women today decide to carry an unexpected pregnancy to term, teenagers are less sexually active and with fewer partners, pro-life views are more prevalent among the rising generation than they were 40 years ago, and states continue to adopt legislation that defies the radical message of legal abortion until birth embodied in Roe v. Wade.”

According to a 2017 Knights of Columbus/Marist Poll, 41 percent of young people, ages 18-29, believe that abortion should always be illegal or only allowed in the case of rape, incest or a threat to the life of the mother. Young women, especially, are rejecting the feminist doctrine that abortion ensures gender equality for women. Young conservative commentator, Allie Beth Stuckey, contends that “there is nothing empowering about killing a child…Too many women have been manipulated into believing the pro-choice movement is for them, when nothing could be further from reality.”

While many millennials reject the tired, feminist dogma surrounding abortion, states have been eating away at abortion on demand with limits that have a broad base of support. Polls show that at least three-quarters of the U.S. population believe that abortion should be limited to the first trimester; about half the population believes that the question of regulating abortion should return to the states, as was the case before the Roe ruling; and, for the first time, Senator Steve Daines (R., Mont.) has announced that he is forming a pro-life caucus in the Senate. (The House of Representatives has had a pro-life caucus since 1981.)

The UN: enshrining abortion as a human right

Even as pro-life forces gain momentum in the U.S., on the international level, in the fall of 2018, the United Nations Human Rights Council sought to enshrine abortion as a universal human right. They actually claimed that abortion constituted a “right to life.” In producing “non-binding” resolutions that promote abortion as a human right, the UN is creating a type of precedent in international law. This results in abortion rights organizations assisting women from countries with conservative abortion laws in filing complaints with the Human Rights Committee against their home countries. The Human Rights Committee regularly rules against those countries and orders them to compensate the women denied access to abortion.

How did an international body with a Universal Declaration of Human Rights come to champion the killing of unborn babies? First of all, from day one, the United Nations declined to positively address protection of the unborn because of permissive abortion laws in communist nations. In a setting where consensus is the ultimate objective, representatives often feel they must stifle criticism in order to move forward the work on “more pressing” issues.

Since its inception, the United Nations has produced literally thousands of resolutions, with a fewer, though still impressive, number of conventions and treaties. These binding and non-binding instruments frequently contradict one another. The sheer size and scope of U.N. interests and deliberations may be a factor in the moral schizophrenia on display. The United Nations and its member states simply can’t reconcile language that protects children, including the unborn, in agreements such as the Convention on the Rights of the Child, with the constant push from conferences, such as the Commission on the Status of Women, that promote gender equality at the expense of marriage and family. Like the pro-abortion activist that acknowledges the humanity of the fetus while defending a woman’s right to end its life, the United Nations system has embraced the death of the unborn as a response to poverty, ignorance, displacement, violence, and inequality.

Using abortion as a response to financial and educational need as well as violence and abuse against women is to apply a bandage to a gaping wound. Abortion does not provide skills or employment. It doesn’t teach boys and girls, women and men, to read and comprehend the world around them. And it most certainly does not end violence and abuse – indeed it more often protects perpetrators at the expense of women and children. Abortion is the cheap “fix” that degrades human life and leaves women doubly wounded.

The power of an enduring truth

Perhaps one of the reasons for the less enthusiastic turnout for the Women’s March was its lack of focus. The 2017 march was clearly a demonstration of fury at the election of Donald Trump, but this year’s march was a protest against a conglomeration of “isms” – white nationalism, sexism, ableism,  and phobias – transphobia, homophobia, Islamophobia, and, of course, the usual defense of “reproductive rights.” Buried in the spirited sermons was this poignant bit of irony delivered by a woman quoting the Prophet Mohammed: “When you kill one innocent man it is as if you kill all of humanity. When you save one life, you save all of humanity.”

It’s what the March for Life has been saying all along.

Great article - thank you for providing this powerful insight.