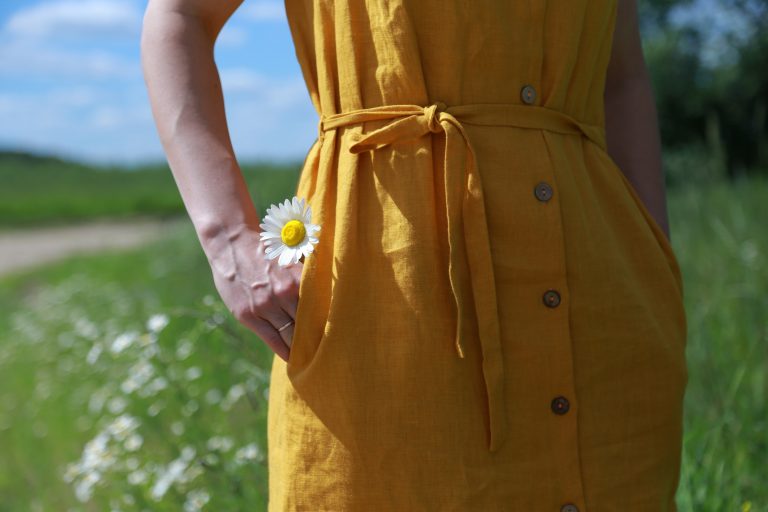 Terri received a call from her sister, Lori, one morning. They often talked on the phone, but she could tell this call had a special purpose.

“Terri,” Lori said, “I need your help in getting rid of a dress.”

Terri thought that sounded like a strange request, and she listened as Lori told her the story.

Lori and Terri were both good seamstresses, having learned it from their mother. One day, as a birthday present, Lori was invited by her mother to go with her to pick out some fabric to make a dress. They had spent much of the day together looking at different pieces at the store. Lori finally settled on one that was a bright yellow with lots of flowers on it. It reminded her of sunshine and spring, two of her favorite things. After her mother paid for the cloth, she took Lori to a restaurant, and they had dinner. It was an unforgettable day.

Lori wasted no time making the dress. She had recently had a baby, and she wanted the new dress for when she got the weight off that had come with carrying a child. So, she made it for the size she wore before she got pregnant.

It didn’t take her long to make the dress, but getting the weight off was another matter. She kept the dress hanging where she could see it every day as motivation. But try as she might, some of the extra pounds stubbornly refused to leave. The dress became a painful reminder that she would never be her young, trim self again. Lori finally made the decision that it had to go.

She took the dress to a local thrift store. But knowing how much her mother looked forward to seeing her wear it, Lori set out to find the same material. She checked every place within a hundred miles that she knew sold fabric, but there was nothing even close to the same. She also checked online with no luck. She kept a small piece of it in her purse for comparison and checked everywhere she went.

Then on her next birthday, she got a surprise. As a present, her mother presented her with a dress that looked exactly like the one Lori had made. In fact, as Lori looked at it more, she realized it actually was the one she had made.

“I found this at a local thrift shop,” her mom proudly said. “It reminded me of the cloth you liked, and I knew you would enjoy it.”

Lori thanked her mother and put the dress away. It obviously still didn’t fit and continued to remind her of that fact. She finally decided she had to get rid of it again. She didn’t want to just throw away such a lovely dress. So, she waited until she thought her mother would have forgotten about it, and when she was in Salt Lake City, four hours from home, she dropped it off at a thrift shop.

That’s why it was almost a horrific experience a few weeks later when they had a family dinner and her mother presented her with the same dress. Lori thought that was impossible, but when she checked it over, she found the few tiny flaws that she had made.

Her mother happily shared the story of her purchase. “Your father and I were traveling down to see your brother in Nevada, and I realized I had forgotten my swimsuit. We stopped at a thrift shop in Salt Lake City to get one, and I found this dress. Now you will have many matching dresses.”

That was the reason Lori called Terri. “I don’t know what to do,” Lori said. “It’s almost like the dress is possessed and keeps coming back to haunt me to remind me I am bigger than I want to be. I mean, what is the chance Mom could have gone to the same thrift shop where I dropped the dress off? There must be hundreds, if not thousands, of thrift shops in Salt Lake City.”

Lori gave the dress to Terri, and Terri promised she would do something good with it but make it so it would no longer come back to remind Lori of the weight she couldn’t lose. Terri used the fabric from the dress in a quilt, feeling that would take care of it.

But one day, their mother saw it. She laughed. “You know what? Lori loves that fabric and even has dresses from it. After she bought some of that material, I went back and bought the last of it from the store. It has been in my sewing room for years as I wondered what to do with it. But you have given me the perfect idea.”

“Since Lori loves it so much, I’m going to make her a whole quilt out of it.”

Just need to know if this is based on a true story, or a figment of imagination.

Ah, yes--there are a lot of women out there who can relate to this story, including me. Thanks for the chuckle.