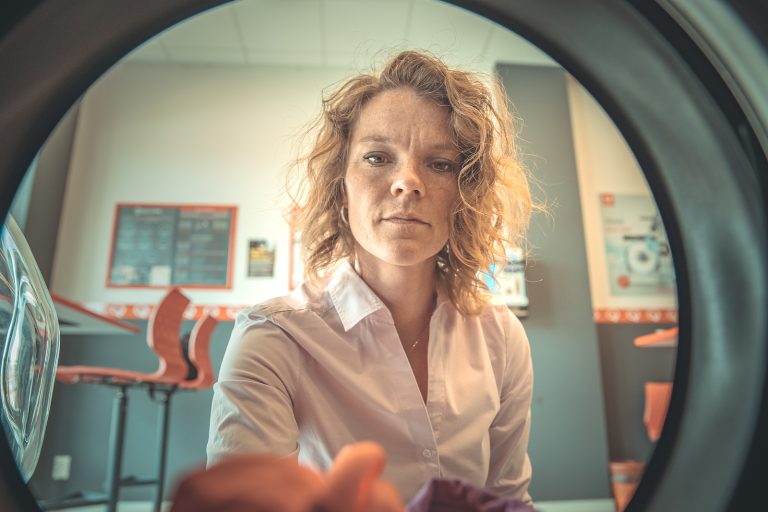 Do I use Conference as a chance to measure how well I think the Brethren are doing in supporting my preferred social issues, or to listen for comments that prove someone else’s political views are contrary to the gospel, or to gather evidence that someone in my life has done wrong, or just drowsily hoping for some dramatic announcement?

I was born and raised in the Church, so although in one sense I’ve always known it was true, in another sense it has always been so ordinary and familiar that as things have changed or new Church policies and statements have been announced and issued, I’ve had to revisit my opinions about things and ask myself, “Wait, do I really believe that?” As these issues have surfaced over the years and I’ve gone to the Lord with my questions and concerns, in various ways He has reassured me that yes, the Church is true and that it is worth my while to stay active. But one day all that changed, in a dimly-lit basement laundry room.

A few years ago, my husband and I followed a prompting to go to graduate school in New York City. Things started off fun and adventurous, but after a couple of years it became more difficult. One particular year, our family of 7 was living in a 790-square-foot apartment in Harlem, NY, and things really started to go wrong. One of my husband’s fellowships didn’t renew, so we were even poorer than usual. My best friend moved away with her family and I got released from my calling, so I felt adrift. My oldest was starting to show signs of mental illness. It was hot and smelly, we were cramped, and the expensive city was beginning to drain me of joy and energy.

I felt so unhappy, and wondered why we had been prompted to move there if it was going to end up being so difficult. One night I prayed to the Lord, asking Him to reassure me that the gospel really was true—after all, living it sure hadn’t led me to a secure, happy life and paying tithing and magnifying my callings hadn’t led to financial wealth or even security! However, as so many times before in my life, I felt his Spirit reassure me, and I found the strength to move on. Over that difficult year I reached out to the Lord two or three times as various crises and difficulties challenged my faith, each time asking for reassurance that the Church was true in spite of things not working out the way I’d planned and hoped, and each time receiving it.

Then one day I drove with three of my children out to New Jersey for our monthly shopping trip. I bought all our staples for the month, and laboriously loaded all the cans and bags and supplies and strapped everyone in their seats, only to discover that our aging car wouldn’t start.

This car would occasionally refuse to start, but generally would work if we just left for a while and tried it again. So, I unloaded the kids and went back inside to the air conditioning to wait. After I thought enough time had passed, I went back out in the heat to discover that, not only was the car still not starting, but someone had broken into it and stolen all my purchases.

In the end, and after taking three bored and grumpy children back for another identical shopping trip that I didn’t know how we could possibly pay for, the car did start and we made it home.

The next night, one of those little children of mine left the kitchen sink running with the stopper in it, and before I realized it, water had spilled out of the sink and all over the floor. I was up to my ankles in wet towels, trying to direct the older children into helping me soak up all the water, when our landlord knocked on the door and yelled at me for causing water to flood the ceiling of the apartment under ours.

I was in tears when he left, but finally got the water cleaned up. But I had used every single towel we owned, including hand towels and washcloths! So I loaded two garbage bags full of wet towels and dragged them to the elevator, down to the basement, and then to the laundry room. Partway one of the bags ripped, and I got lectured by a staff member for tracking water on the floor, although I literally had not a dry item to soak it up with.

Finally, the towels were in the washer, and I went upstairs to cook dinner. An hour later, I moved all those towels into dryers. Finally, after the children were in bed, I trekked back down to the laundry room to discover that someone had stolen every single one of our towels out of the dryers.

I collapsed in the one unbroken chair in the laundry room, too drained to even cry. The Lord had brought us to this City, and it had given us nothing but trouble and expense and despair. Following the Spirit had done nothing but put me in the path of thieves! I closed my eyes to pray, asking again for reassurance that the gospel was true, pleading for proof that I wasn’t just deluded for making decisions by the Spirit, that the teachings of the Church were true even though they hadn’t let me to peace and happiness.

But this time, partway into my plea I realized something: I kept asking the Lord to prove Himself over and over, when He already had. I might be exhausted and demoralized and poor, but so have been many prophets and faithful disciples I’d read about in scriptures and church history. I never questioned by allegiance to the Church when reading about difficult things that happened to them!

If the Church was true when I was a young adult, gaining my first testimony—if it was true when my husband and I married in the temple and felt the Spirit seal blessings on us—if it was true when the Lord guided us in our decisions year after year—if it was true, not so long ago, when a beloved baby passed back into the spirit world and the Savior comforted and blessed and protected us beyond comprehension—then it was true even when the car broke down and the groceries were stolen and  I got yelled at and had to buy new towels.

I changed my prayer. I said, “Father, never mind. I’m sorry I keep asking you about this. You’ve already told me, and it’s childish to revisit my testimony every time anything bad happens to me. I won’t do it again.” I promised my Father in Heaven that I would never again ask Him to reassure me about things I already knew. I promised that I would stop seeing my challenges and trials as excuses to reconsider whether I really needed to be keeping the commandments. I told him I was done questioning my faith.

Since that moment, my life has never been the same. The Lord has blessed me beyond imagining, spiritually and in many other ways. I didn’t do anything dramatic or skillful—I just promised to settle my faith and quit revisiting it all the time.

We just finished General Conference, and this provides a perfect time to do the same. We can stop and think: Do I use Conference as a chance to measure how well I think the Brethren are doing in supporting my preferred social issues, or to listen for comments that prove someone else’s political views are contrary to the gospel, or to gather evidence that someone in my life has done wrong (“Elder So-and-So said!”), or am I just hoping for some dramatic announcement? If so, I can do better than that.

This is a chance to ask the Lord to confirm to us, once and for all, that his prophets, seers, and revelators really are prophets, seers, and revelators, and that they speak for Him. If I didn’t pay particular attention to conference, if I was busy with other things, this is the perfect time to ask for, and receive, that special witness so I can truly take the blessings of Conference, and the blessings of having a living Prophet, with me through the next few months.

The Lord loves covenants. I testify that the way to receive a witness is not to simply ask for reassurance, but to covenant that we will live differently because of that witness.

We can promise that, if we are told through the Spirit that these men are truly prophets, that we will support them and sustain them and walk alongside them. We can promise that, if He will grant us a clear confirmation now, that we will accept that confirmation. We will stop looking for excuses to ignore the prophets’ words, stop seeking occasion to justify disobeying their counsel, stop measuring their proclamations by the dubious wisdom of our culture or political party.

The Lord loves covenants, just like he loves effort, and He delights to honor righteous covenants. Let’s take the opportunity this weekend to achieve a promise from Him in exchange for a promise from us. We will be rewarded beyond what we can imagine.

Thank you. Your article has given me a lot to think about as I am trying to change my perspective on my trials. I also find myself questioning whether I have really been forgiven of certain sins and your experience helps me work on that also.

So well said and straight to the point...stop making excuses and start making covenants. Thank you.