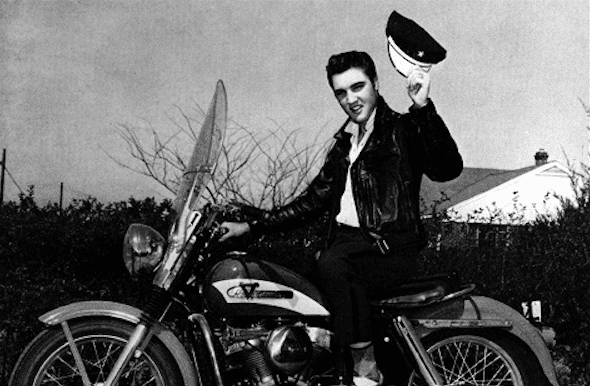 The following was written by Danielle B. Wagner. To read the full article on LDSLiving, click here.

Elvis didn’t relish his title of King. As he said, “there is only one King,” and that was Jesus Christ (Brother Paul’s Mormon Bathroom Reader, Paul B. Skousen, 2005).

Deeply religious and a heavy reader of spiritual topics, Elvis showed considerable interest in the LDS Church and maintained many close connections with Mormons.  In fact, after his death, a copy of the Book of Mormon was found in his room with the message, “Priscilla needs to read this” written within the well-worn cover (Brother Paul’s Mormon Bathroom Reader, Paul B. Skousen, 2005).

Elvis received several copies of the Book of Mormon, one from Olive Osmond—who gave copies of this sacred scripture to many famous people, including the Queen of England—and another from Cricket Butler. A young LDS woman and ardent Elvis fan, Butler often sat vigilantly outside his home or hotel—coming early in the morning and staying late in the night—waiting for a chance to speak with her idol. Butler’s persistence finally paid off when late one evening Elvis walked out to his gates to visit with her. During their conversation on life and its purpose, Butler handed him a copy of the Book of Mormon.

One of these copies, an ordinary 1976 version of the Book of Mormon, was found in Elvis’s room after his death and took quite the journey, finally ending up at Church headquarters (“Elvis Almost LDS?” Lynn Arave).

Inside this well-traveled Book of Mormon were a series of hand-written notations reportedly made by Elvis. During an interview for a 2007 documentary entitled “Tears of a King,” Butler claims she became good friends with Elvis following their late night discussion and even sat in on missionary discussions at Graceland. In fact, Butler claims to know the date Elvis planned on being baptized (“Elvis Almost LDS?” Lynn Arave ). Former missionary Bobby Kauo shared that he did, in fact, teach Elvis missionary discussions, but it wasn’t at Graceland. He taught Elvis while the King was filming Paradise, Hawaiian Style at the Polynesian Cultural Center, though he mentioned nothing about an impending baptism.

Whether Elvis’ baptismal date is fact or fantasy, there is no doubt that Elvis had many close ties with LDS families.