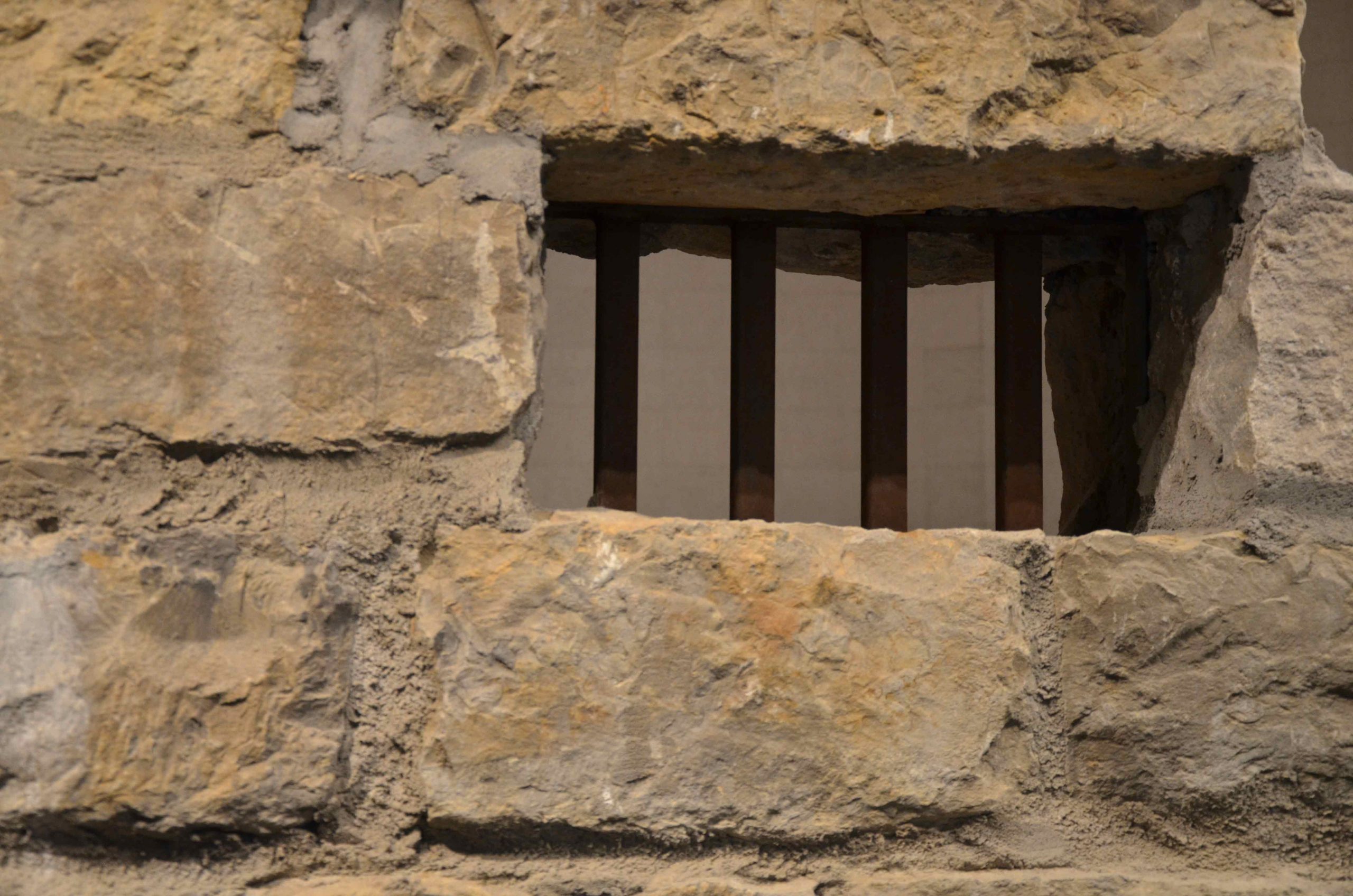 I love this time of year for the ubiquitous reunions, and state and national holidays where we celebrate the blessings of our heritage. I recently attended a family gathering honoring our mother, Amelia Smith McConkie. It was noted that when she was born, there was not much reason to suppose she would come to any good, seeing as she had descended from convicts on both sides.  Her great grandfather on her father’s side, Hyrum Smith, was murdered in Carthage Jail, Carthage, Illinois. Her Grandfather on her mother’s side was George Reynolds, party to the 1878 United States Supreme Court test case on plural marriage.

Grandfather Reynolds served his time in the old Sugar House prison. George Q. Cannon, who was a member of the First Presidency of the Church, was serving with him for the same cause. During this imprisonment, President Cannon wrote and published a book titled The Life of Joseph Smith the Prophet.

I have in my possession the original edition copy that George Q. Cannon gave to Joseph F. Smith, who was also in the First Presidency, and another reprobate ancestor of mine who was hiding from the United States Marshals in what we are wont to call the “underground.” On the flyleaf of the book, President Cannon has written a graceful tribute to Joseph F. Smith, but what touches me is the signature, “Your fellow laborer and Brother, George Q. Cannon, Utah Penitentiary, Oct. 15, 1888.”

Other memorabilia in my keeping manifests signatures of Joseph F. Smith, Wilford Woodruff, Parley P. Pratt, Lorenzo Snow, and Mercy Fielding Thompson. Each sacred book, pamphlet, or letter reflects a testimony of what the original owner lived and suffered for the sake of truth.

The Prophet Joseph Smith wrote from Liberty Jail, “God hath said that He would have a tried people, that he would purge them as gold,” and that Missouri was his crucible.[i]  In fulfillment, Joseph declared that the Saints of Missouri had sustained the commensurate ravages perpetrated upon the ancient Saints in their day.

For a moment, I would take you to the cold, unfinished, unfurnished frame house in Far West, Missouri, population 5000, where my second great grandmother, Mary Fielding Smith, gave birth to a premature Joseph F., on 13 November 1838. The baby was born on the very day his father Hyrum, the Prophet Joseph, and four others were brought to a hearing before circuit Judge Austin A. King in Richmond, Missouri, for supposed crimes that were not enumerated. At last, it was reasoned that prophesy was a pronounced treason.

A few days after Mary gave birth; a mob led by Samuel Bogart, a Methodist preacher who had been on his jury, broke into Hyrum’s house looking for deeds, plat maps, inheritance records, and receipts for government land purchases. They needed these in order to confiscate property and enrich themselves. In the commotion they threw a mattress on the baby, Joseph F., who was discovered near death at the mob’s departure. Mary was desperately ill with blood clots, and the baby was revived by her sister, and his aunt, Mercy Fielding Thompson, who then nursed him along with her own babe.

In his excitement over the October 25th Battle of Crooked River, Governor Lilburn W. Boggs issued his infamous 27 October 1838 Extermination Order calling for the Mormons to be “exterminated or driven from the state if necessary.” The order’s firing site marked Joseph Smith and those closest to him.

Boggs then sent the troops led by Major General Samuel D. Lucas who laid seige to Far West, a body of 2000 which grew to ten. When Joseph rode into his camp to sue for peace on 31 October, he, and those with him, were promptly arrested.  Lucas sent soldiers into the city to arrest Hyrum the following day.

Hyrum wrote of his 1 November 1838 experience:

“We were permitted [to return to our homes for some clothing] under a strong guard of five or six men to each of us…we were not permitted to speak to anyone of our families, under pain of death. The guard that went with me ordered my wife to get me some clothes immediately, within two minutes, and if she did not do it I should go off without them. I was obliged to submit to their tyrannical orders…with my wife and children clinging to my arms and to the skirts of my garments … [and torn] away from them at the point of the bayonet.” [ii]

In Lucas’ camp, the brethren had little food, were forced to sleep on the ground which was frozen and at times covered with snow.  They had no blankets or covering, and suffered extremely with the cold. They were court martialed in an eerie, illegal tribunal, and condemned to be shot the next morning at 9 a.m. in the Far West public square. Their murder was prevented by Brigadier General Alexander Doniphan, after which Lucas ordered them to Richmond, Missouri, for execution.

Hyrum recalled, they were “exhibited to the inhabitants along the road, the same as they exhibit a caravan of elephants and camels. We were examined from head to foot by men, women, and children, only I believe they did not make us open our mouths to look at our teeth.”[iii]

At the end of the Richmond hearing, they were sent to Liberty Jail, Liberty, Missouri, where residents of the town gathered to watch them enter the jail December 1st, 1838.

They were confined in the 14 square foot vermin-infested dungeon. They slept on slabs of wood, or straw.  Much of the time they were bound in chains. Hyrum wrote that the food was nauseating and vile, delivered in the same bucket that was used for human waste that was drawn from the dungeon through the trap door. On occasion, some member of the Church would pass food to them through the grated window on the side of the cell.

Joseph wrote that while in the jail they longed to hear the voice of a friend. Mailed letters were censored—those going out and those coming in. The brethren, therefore, appointed couriers. In March of 1839 Joseph wrote a letter to the Church, excerpts of which have become Sections 121, 122, and 123 of the Doctrine and Covenants.

The letter went first to the Prophet’s wife Emma in Quincy. Illinois, where Mary and the other Saints read it. It then went to Bishop Edward Partridge because of the temporal counsel for the Saints. A copy was made for Father Smith to keep for Joseph’s records.

In that letter, Joseph indicated that the revelations which had rained down upon the Saints would change the history of the earth, that the gospel would bring salvation to millions, and that it would break the chains of every false system. He intimated a coming fulness of temple ordinances.

He proclaimed that in order for God to do his work wherein he would vex the nation, the Saints must gather every false and libelous publication, history, or testimony that had been borne against them; they were to name names, secure affidavits, and testimonies of the depredations they had suffered. These were to be presented to the heads of government “in all their dark and hellish hue.” He declared this work was an “imperative duty we owe to God,” who had opened the heavens, “to angels” who had brought priesthood and keys, to those who had sacrificed to lay the foundation, to the wives and children had who had “been made to bow down with grief, sorrow, and care, under the most damning hand of murder, tyranny, and oppression,” to the rising generation which must be fortified and build upon these things, to those who were looking for the truth and did not know where to find it, and finally as a judgment to stand against the wicked at the last day where under the providences of heaven Joseph will stand as their judge.(D&C 123:6.) We understand that these principles apply to the mobbing, driving and exodus, the martyrdom, and to all depredations committed to thwart the Lord’s work.

I have spent more time on this material than I meant to. Why does this not surprise me? It calls to mind the Prophet’s words, “Our name will be handed down to future ages; our children will rise up and call us blessed; and generations yet unborn will dwell with peculiar delight upon the scenes that we have passed through, the privations that we have endured; the untiring zeal that we have manifested; the insurmountable difficulties that we have overcome in laying the foundation of a work that brought about the glory and blessings which they will realize.”[iv]

When I was a little girl, I sat on the couch with my Grandfather, Joseph Fielding Smith, while he told me the stories of Mary Fielding and Hyrum Smith. He showed me the gold watch which the Prophet Joseph Smith had given Hyrum, and which had come from his own father, Joseph F. Smith, to him. He had me examine the inscription bearing their sacred names. He told me of Hyrum’s writing desk which he then owned and which had once held the gold plates.

Hyrum’s name was carved on the side, and spelled “Hiram.” The box now contained temple clothing belonging to Hyrum and Mary, which was of her making, Hyrum’s blue masonic apron, and a temple apron of white kid leather with five embroidered leaves, and the rest of the nine not. A note was pinned to it saying Emma had been embroidering the apron, but quit because the leather was too hard to sew through.

When Mary left Nauvoo, she took eighteen persons for whom she was responsible, six wagons and one buggy. The effort she made to dispose of her property in Nauvoo, and secure these wagons and the teams to pull them was monumental. Because of her struggle she was one of the last to leave Nauvoo. As she left the city a mob of 900 armed men had stationed themselves on her farm where they began the bombardment of the city. She and her household watched the flames and heard the cannonade from the Iowa shore.

Mary took all of Hyrum’s children with her with the exception of Lovina who had married Joseph’s adopted son, Lorin Walker, and who would later join the family in the Greater Salt Lake Valley. She brought Hyrum’s box that was used to hide the plates, his temple clothes and hers, the beautiful oil paintings of Hyrum and his beloved first wife, Jerusha Barden, the homely Sudcliff Maudsley paintings of Mary and Hyrum that Maudsley painted in Nauvoo. She brought Hyrum’s Nauvoo Legion uniform; the clothes and artifacts of the martyrdom, his watch, the one he returned to the house on the morning of June 24th, 1844, to exchange for the less expensive watch that was shattered by the bullets of Carthage. She brought the shattered watch too.   She brought Mother Smith’s dinner bell, and the little stool the children used to sit on at Mother Smith’s feet, the tea kettle Emma gave her as a parting gift.

She brought more than one seer stone and other sacred artifacts that had belonged to her husband, his diaries and papers which detailed his work in building Nauvoo and the Church. She brought the physical corroboration of the testimony, spoken, written, and sealed in blood. Oh, the compelling testimony of the persecutions, incarcerations, drivings, and human life lost by the convicts, a pattern continuing still, and one of which Mary said, “We would not go one step backward.”  Thank God for the “work that is destined to bring about the destruction of the powers of darkness, the renovation of the earth, the glory of God, and the salvation of the human family.” Thank God for the Convicts.

[iii]   .  Proctor and Proctor, The Revised and Enhanced History of Joseph Smith by His Mothrt, Chapter 48