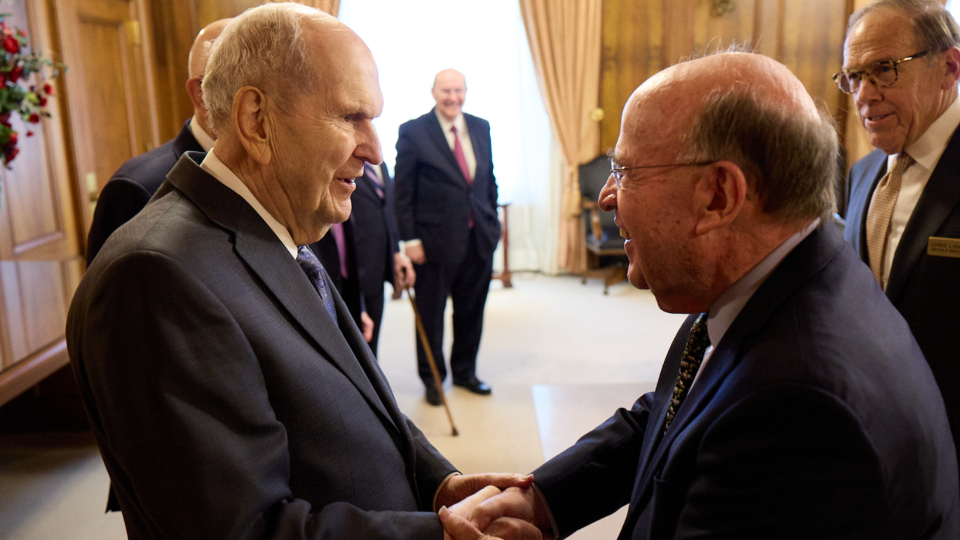 Elder Quentin L. Cook of the Quorum of the Twelve Apostles honored former New York Attorney General Robert Abrams on Thursday night for his many years building bridges between the Jewish community and members of The Church of Jesus Christ of Latter-day Saints.

The award, presented by the J. Reuben Clark Law Society, is named after Thomas L. Kane. He was a friend to and a critical political influence for the Church in the 19th century.

“Thomas Kane holds a unique and important place in the history of the Church, and so it is with enormous gratitude that I receive an award in his name,” the four-term attorney general said from the Conference Center Theater on Temple Square. (Read his full remarks.)

Abrams met with the First Presidency earlier on Thursday.

Abrams told members of the society, a Brigham Young University (BYU) supported association of lawyers affirming the strength that religious conviction brings to the law, that each of them in their own sphere of influence can have the same impact as Thomas Kane.

“Your efforts to build bridges will take you to surprising places that you never envisioned,” Abrams said. “You will encounter unique experiences, newfound friendships and the knowledge that you have done your part to help create the unity necessary to maintain a strong and vibrant nation. Let this be the message and legacy of this event.”

In an interview earlier on Thursday, Abrams’ wife, Diane, said, “I’m really proud of him, and I’m thrilled that he’s a bridge builder. … It’s one of the major things that we should all try and improve on.”

Abrams’ relationship with the Church of Jesus Christ started small, with two Latter-day Saint lawyers in Arizona. Over the years it blossomed. In 2009, he played a key role in resolving tensions with some in the Jewish community about the Church’s posthumous baptisms of Holocaust victims.