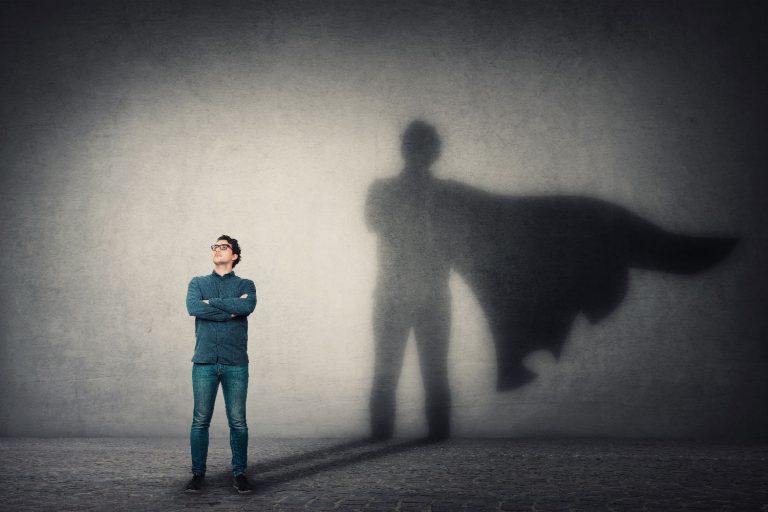 The Case for Heroic Masculinity

The following is excerpted from the Public Square Magazine. To read the full report, CLICK HERE.

When my little boy was four years old, he had a hard time going to school. He was in a Pre-K program and struggled tremendously with the anxiety of being away from his mama—breaking down in tears at the very idea of going to school the next day.

I asked a therapist for help. I wasn’t sure what to expect, but at least some kind of serious therapeutic intervention.

The counselor gave me a book. A children’s book. Like, with pictures.

I was incredulous. The suggestion felt minimizing, as though my family’s dilemma was not important. My incredulity lasted until another friend, a Kindergarten teacher with plenty of experience in the ways of crying 4-year-olds, confirmed the counsel:

“You need to read him stories.”

But wait, I do read him stories. Plenty of them. What was I missing? You might as well have told me to look at a brazen serpent on a pole.

“They’re called social stories,” she explained. “They will give him a pattern to follow. Read him a story about how a child was nervous to go to school but was brave and how it all worked out.”

I returned to this therapist a couple of weeks later, humbled to report that it had worked like magic.

The story really did the trick. As it turns out, human beings are mimickers—mirroring whatever we see around us, both good and bad. And for my boy, the social story became a template to introduce a better story he could live up to.

By small and simple things. I’m struck by how boring the most important societal solutions often are. Checklists in hospitals save lives, and exercise and good sleep are among the very best cures for a whole host of ailments (including mental ones). Yet they are overlooked precisely because they are already known—commonplace, even. And yet, they make the biggest difference of all.

Which brings me to my point here. Somewhere, a poor saint has been asked to write a talk for Father’s Day. That person has my condolences and affection, for I once had to give a talk on Mother’s Day.

It wasn’t a bad talk. It was funny in parts and saccharine in others, and it hit the right notes—with people smiling in the right places. But it wasn’t a great talk—partly, perhaps, because of the advice I got beforehand: “Be very careful. Mother’s Day is hard. Be inclusive. And sensitive. Be sure to be kind. Don’t say anything too risky.”

Whatever compliments came afterward, I couldn’t shake the sense that it had been an utterly empty talk. When President M. Russell Ballard was asked if it is hard to give a talk at the Church’s General Conference, he said, “No. What’s hard is giving a good one.”

You can tell the stories of good men.

Exemplary depictions. Some of our stories get this right. Let me recount two of my favorite scenes in modern cinema. You’re in for a treat, too: I’m a rather refined cinephile—no doubt due to the refined tastes of the people I choose to surround myself with. (My kids, ages 2, 5, 7, and 9.) The film in question is The Lion King.

I asked a friend of mine which scene best portrayed masculinity in a positive light. He suggested, “It’s the one where Mufasa saves Simba, right?”

Close. It’s actually the scene directly after that one. After dispersing the ravenous hyenas and rescuing his boy with a roar, Mufasa, king of the pride lands, takes his son to the side for “a lesson.” Simba is sternly corrected by his father for putting himself (and his companions) at risk. It is a hard rebuke, even if filled with loving concern. The conversation ends with expressions of affection and playful tussling in the grass. In a moment of heavy foreshadowing, Simba asks if they will always be together. “Let me tell you something my father told me,” Mufasa says in response. “Look at the stars. The great kings of the past look down on us from those stars. So whenever you feel alone, just remember those kings will always be up there to guide you. And so will I.”

The second scene is the emotional climax of the movie: Simba, now grown, has finally come to himself. He climbs pride rock in the pouring rain, and having defeated the villainous Scar, he hears the spirit of Mufasa thunder, “Remember …” who you are. Simba takes courage and finally accepts his place as king. He roars—symbolically accepting coronation—as his kingdom roars back in assent.

Remember these scenes. We’ll come back to them.

Masculinity is the Solution

I’m struck by a recent bit of research by Jenet Jacob Erickson, James McQuivey, and Brad Wilcox. From the article: “New research finds that the happiest and strongest women self-identify as feminine.” That’s a surprising finding: I’ve always assumed that it takes courage to reject cultural gender norms. It never struck me that it might take courage to embrace them. (And those who do appear to be better off in a number of ways.)

I can’t speak to femininity, but there is certainly a degree of courage required in embracing healthy, noble, even heroic masculinity as well—and pushing back on what the larger culture says men are by nature. Some of the tropes about men are that they are doofuses, absent, irresponsible, or angry. We hear of rebellious teen boys or grown men who still live in their mothers’ basements. Some consider toxic masculinity an inability to express emotion, a need to bottle up anger or resentment until it later explodes, harming everyone within the blast radius. Another strand of toxicity is a man who is willing to use violence to get what he wants—particularly from a woman.

To be clear, there is nothing manful about anything in these examples. It’s another case of backwardness: what we call “toxic masculinity” is most often a refusal to become a man, to shoulder responsibilities, reject resentment, and face difficulty with courage. We are calling the problem “masculinity” when most often it is “juvenility.” Masculinity isn’t the problem; it’s the solution.

Meanwhile, our culture has turned not merely against men but against the manly virtues: moral accountability, courage, responsibility, and emotional stoicism. I don’t know what makes these things manly—certainly, women can (and do) exemplify all of them—but they are too often reflected in our media as bad by default.

When the Texas shooter’s father was asked about his son, he responded, “I don’t want them calling him a monster … they don’t know nothing, man. They don’t know anything he was going through.” This parallels his mother’s statements to “please don’t judge him” and “he had his reasons.” My heart goes out to Salvador Ramos’ parents, who plead for mercy for a son who has done unspeakable horrors. I can’t imagine the hell they have gone through.

And yet, from a Christian perspective, mercy in the face of evil is hardly merciful to either those who suffer or even to the perpetrator himself. In contrast to this father’s pleas for mercy, the mighty Mufasa corrects and rebukes his son, positively flowing with wisdom, authority, and accountability. Excusing our most despicable acts is a form of subsidy for the very worst of our behaviors. There is nothing moral about it.

The story of Simba being reproved by his father is one of moral accountability. It still makes me tear up. This little scene is one of the best depictions of masculinity I have come across—starting with the depiction of a father lovingly correcting his son. There is something fundamentally right and good about a man teaching a boy to be a good man.

As the youth these days are wont to say: this scene “slaps.”

And yet, that is not the message our youth are getting. Too often, they are hearing that any kind of “authority”—especially “moral authority”—is to be held in suspicion. In a recent lesson about avoiding the perils of “permissive” teaching and “authoritarian” teaching, I highlighted the research around “authoritative” teaching that combines both love and healthy structure. I was surprised by this student’s comment: “Can’t we change the name? I don’t like how it still sounds like the word ‘authority.’”

Any kind of strong judgments or emphases on consequences or accountability are likewise quickly seen as wrongheaded. Yet we must call evil that which is evil. Now, I have no interest in judging the shooter’s parents. I do, however, judge our culture, which too often maintains that when someone has committed an act of ultimate horror, they too should be given mercy and grace. This is mercy robbing justice. It is wrong. As Isaiah said of the Messiah, “He will reprove with equity for the sake of the meek.” Moral accountability isn’t for the punished; it is for the victims. We have increasingly lost our sense of moral accountability, and to the degree that continues, it will end in more suffering, not less, and that suffering will primarily land on the meekest among us.

Good times make weak men, which make hard times, which make good men, and so the story repeats. It seems to me that we are somewhere after “weak men” and just before “hard times.” Maybe I worry too much, but my work in schools has given me ample reason to be nervous. Teachers are known to grumble. (On any given day, 80% of teachers will tell you that this is the hardest batch of kids they’ve ever had.) And yet, behind the grumbling is something more sinister; something is off. Crime is up. Drinking is up. There is a feeling that America is coming apart at the seams. We feel it in the mental health crisis, in our political friction, and in a lot of other things. We’ve gone through a pandemic, and now we face a mental health crisis, a war, and major inflation.

I don’t think the solution is mere policy. When the pandemic came around, I said on social media that it seemed to be a good idea to repent. I wasn’t joking. (And even if I’m wrong, it never hurts.) The real solution is humbling ourselves and turning again to what is good and right, but that will require us to find again our sense of moral accountability.