The Boldness of Christ at the Feast of Tabernacles | Meridian Magazine 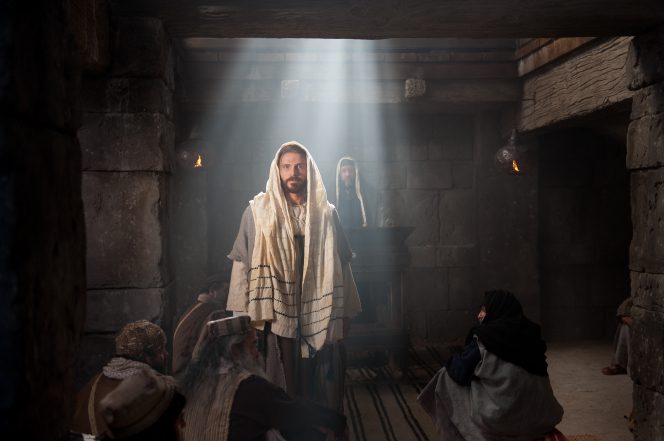 The Boldness of Christ at the Feast of Tabernacles

Israel was about to celebrate the Feast of Tabernacles, and the leaders of the Jews in Jerusalem were hopeful that the feast would provide them with an opportunity to kill Jesus (John 7:1, 19, 25, 8:59).

The crucifixion was six months away.

The Savior had been living and teaching in Galilee because of the animosity of the Jews in Jerusalem, but everyone expected that he would go to Jerusalem for this important Jewish feast. Deuteronomy commanded all Israelite males to come to the feast (See Deuteronomy 16:16). His own kinsmen who did not believe in him, tried to cajole him into going.

His brethren therefore said unto him, Depart hence and go into Judea, that thy disciples [there] also may see the works that thou doest.

For there is no man that doeth anything in secret, and [better: if] he himself seeketh to be known openly. If thou do these things [the miracles that prove you are the Messiah], shew thyself to the world.

For neither did his brethren believe on him (John 7:3-5).

But Jesus refused and sent them on their way, and then followed a little later, secretly (see John 7:10).

The Feast of the Tabernacles lasts one week and one additional day. Perhaps Jesus’ intent was to watch the festivities from the sidelines, but by mid-week he could no longer restrain himself. He knew that the people were wondering and asking about him (see John 7:11, 12) and that he had a message they needed, and so “Jesus went up into the temple, and taught” (John 7:14).

Why? Why the subterfuge about not going to the feast, and why the concern about the desires of the Jews to kill him, and why the secret trip to Jerusalem, if he is after all going to go to the very heart of the city during the central part of the great celebration, and teach?

I think the answer may be found in a scripture from the Old Testament: Jeremiah 20:9. Jeremiah tells us that the word was in his heart “as a burning fire shut up in [his] bones, and [he] was weary with forbearing, and [he] could not stay.” I believe that Jesus could not “stay”.

And I also believe that it was thing he felt he had to do. It seems clear that he did not want to go into the midst of murderers and apostates, but there was the matter of his mission. I have often thought that Isaiah 50:7 is a description of the Savior’s attitude about this journey to Jerusalem for the Feast of Tabernacles.

For the Lord GOD will help me; therefore shall I not be confounded: therefore have I set my face like a flint, and I know that I shall not be ashamed (Isaiah 50:7).

I envision the Savior with his face set like a flint, making that lonely, painful journey to Jerusalem.

And so he went and presented himself to the multitudes: to the humble and faithful and searching. He confronted the Jewish leaders. And he repeatedly declared his divinity.

The people were amazed.

Then said some of them of Jerusalem, Is not this he, whom they seek to kill? But, lo, he speaketh boldly, and they say nothing unto him. Do the rulers know indeed that this is the very Christ? (John 7:25 – 26).

I believe they must have known. But they tried desperately to discredit him, and employed a rather ingenious method to try and convince the people that he could not be the Messiah. Some said,

This is the Christ. But some said [the Jewish leaders, no doubt], shall Christ come out of Galilee??

Hath not the scripture said, that Christ cometh of the seed of David, and out of the town of Bethlehem, where David was.

There were apparently those who rejected Christ because his enemies said he was born in the wrong place. This is, of course, a simple problem to solve, if the people are willing to ask Christ himself. He can resolve this conflict with a single sentence, because he was born in Bethlehem, a fact which few knew.

Often today in the kingdom we face this same kind of problem. People who ought to know better are influenced in their perceptions of the Church of Jesus Christ and the Mormons because they hear and accept statements about our beliefs and our history that are not true. All they would have to do to learn the truth would be to ask us instead of our enemies. This is another great reason for being willing to open our mouths. We ought to be willing at any time to correct misunderstandings when we encounter them.

My niece, fifteen years old, was having dinner with her parents (a Mission President and his wife) in New Jersey, when people at a nearby table began to disparage the Mormons and their church. This remarkable young lady, not waiting for the Mission President or her mother to do something, arose and approached the table where our detractors were eating. She was kind, and not confrontational, when she said, “I’m a Mormon. Obviously you have heard some things about us that are not true. Let me tell you what we really believe and who we really are,” which she then proceeded to do.

There is another intriguing event in John 7. When “many of the people believed on him (John 7:31), the Pharisees and the chief priest sent officers to take him (7:32). They came back empty handed.

Then came the officers to the chief priests and Pharisees; and they said unto them, why have ye not brought him?

I read that event and was reminded of the following well-known story about an experience of Wilford Woodruff at the Benbow Farm in England. A constable was sent there by a rector of the Church of England to arrest Elder Woodruff for preaching without a license.

“I told him that I…had a license for preaching the gospel…and that I would wait upon him after the meeting. At the close of the meeting I opened the door for baptism…Among the number baptized were four preachers and the constable.”

Shortly thereafter two clerks from the Church of England were sent “as spies, to attend our meeting, and find out what we preach. They both were pricked in their hearts, received the word…and were baptized. The rector became alarmed and did not venture to send anyone else.” Had you asked the constable and the clerks why they were baptized they might have replied in the words of the officers sent to take Jesus: “Never man spake like this man.”

The story in John 8 of the woman taken in adultery touched me most deeply. This account from the visit of Christ at the Feast of the Tabernacles opened a window for me into the soul of the Savior and the magnetic attraction he had for the honest and good and kind people in Jerusalem.

Jesus had returned to the temple, probably on the eighth day of the feast, to teach again. “And all the people came unto him” (John 8:2). It is not difficult to imagine the consternation of Jewish leaders when their flock of disciples turned away from them to listen to this man from Galilee. Something had to be done to discredit him.

And the scribes and Pharisees brought unto him a woman taken in adultery; and when they had set her in the midst, They say unto him, Master, this woman was taken in adultery, in the very act. Now Moses in the law commanded us, that such should be stoned: but what sayest thou? (John 8:3 – 5)

The question asked by these religions leaders offers another inspiring insight into the character of Christ. These men knew that he would not throw stones, nor even encourage it. He would not do as Moses and the law had commanded. That response to this woman and her sin might give them ammunition enough to attack and destroy his popularity.

In other words, it was an ambush, inspired by the hatred of priesthood leaders whose authority had been challenged by this upstart carpenter and miracle-worker.

His response must have infuriated them. “Jesus stooped down, and with his finger wrote on the ground, as though he heard them not” (John 8:6).

Much has been made of his writing in the dirt, and all manner of speculation has been offered to explain what he was writing. To me, this is the most insignificant of questions. John did not know what he was writing, or knew and did not care enough to tell us. The real issue here is why he responded as he did. His reason seems clear to me.

If you were in a sacrament meeting with all the members of the ward, and suddenly the priesthood leaders of the ward—the Bishopric and the High Priests Group Leader and the Elders Quorum President entered by a side door dragging a partially dressed woman to the pulpit, and then stood there before all the people and announced that she had just been found committing an immoral act, what would you do? Could you beasr to sit still and watch such a spectacle? Would you sit and stare at her or them? Would you leap to your feet and begin throwing hymnals at her? I think not. In an attempt to minimize the shame of such a moment, you would bend (stoop) down, and read scriptures or write notes about upcoming Relief Society lessons.

Imagine the shame the Savior must have felt at being the God of a religion led by men who could do this kind of thing at the temple to a person trapped in sin—the very kind of person for whom you had come to suffer and die?—a person to whom they ought to have reached out in love and counsel and encouragement. Of course he stooped down and wrote!

But they would not let it alone. They kept badgering him, forcing a response that he clearly did not want to give. “So . . . he lifted up himself and said unto them, He who is without sin among you, let him first cast a stone at her” (John 8:7). I imagine him rising slowly to his feet, in his hand a large stone which he holds out before them. His eyes aflame with anger and wet with anguish, he turns slowly to inspect them, holding out the rock, inviting each of them in turn to take it and act. There are no volunteers. “And again he stooped down, and wrote on the ground” (John 8:8). With the challenge of his eyes removed again, the hypocritical leaders slunk from the temple courtyard one by one, “convicted by their own conscience” (John 8:9).

What a great lesson for priesthood leaders who deal with those in sin, and for those of us who discover weaknesses in our neighbors and associates. It is perhaps the most important message from the Savior’s appearance at the Feast of Tabernacles. We all need a stone on our dressers labelled “The first stone” to remind us of this story and the Savior’s message to the scribes and Pharisees, and of his declaration to the woman: “Neither do I condemn thee.” Our business, our only business, is identical to the Savior’s, and that is to help people to stop sinning, not to punish those who do.

The law of Moses required that both guilty parties ( man and woman ) be brought for stoning. The Roman law did not allow stoning for adultery, so obviously one of the persons who brought her to be stoned was involved, and Jesus knew that. They would accuse him, if He followed Roman law, as well as the law of Moses. He knew!