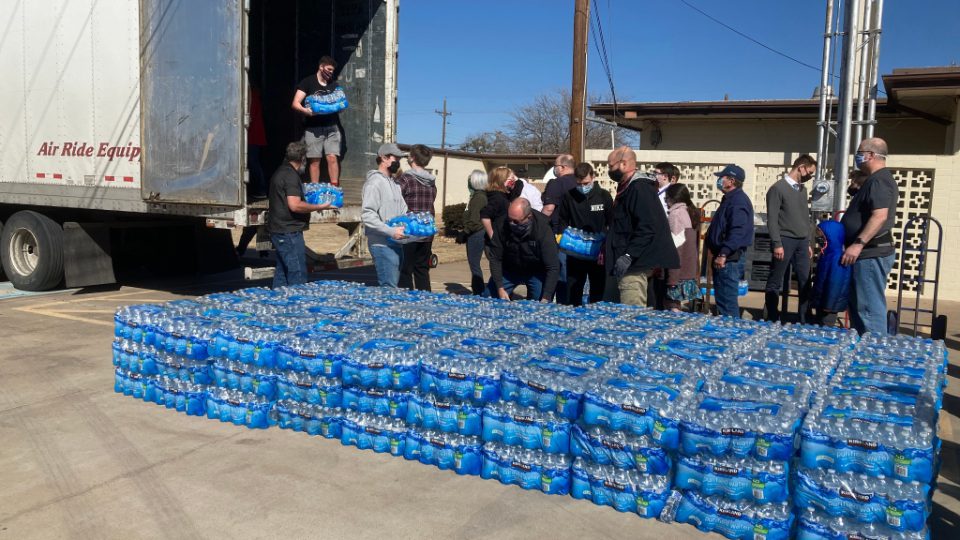 Texas has been all over the news this week after a massive winter storm left much of state with record snow, ice and cold and left millions without food, water, and power. Latter-day Saints in communities across the state were quick to step in and help.

The Church of Jesus Christ of Latter-day Saints sent 36 semi-truck loads with supplies from the Bishop’s Central Storehouse in Salt Lake City including food, water, and mattresses. In all, 790,400 pounds of food and 17,280 cases of water were shipped to those in need in both Texas and parts of Oklahoma.

Though temperatures are now beginning to warm again, local government leaders say it will take time for residents to recover from the frigid Arctic air. Not to mention all the damage that has been done to many homes and businesses whose pipes burst, causing flooding.

A week after power returned to most areas, many still don’t have access to potable water and remain under boil orders from their local governments. But groceries stores have begun to restock shelves with perishable items once again.

In San Angelo and Abilene, Texas, more than 41,000 pounds of food arrived on Tuesday, February 23. The Food Bank of West Central Texas in Abilene was the first recipient. Half of the food shipment was unloaded and processed by Latter-day Saint volunteers and missionaries.

The semitruck then delivered the second half of the food to the Concho Valley Regional Food Bank in San Angelo, where local Church volunteers and nonprofit community leaders stocked the shelves to alleviate hunger caused by last week’s severe winter storms.

On February 21, Latter-day Saints were busy unloading 20 pallets of bottled water in Church parking lots to help the Abilene and San Angelo communities. Working with the United Way of the Concho Valley in San Angelo, the Church provide water for many citizens who called in for help.

In Abilene, Latter-day Saint volunteers delivered water to citizens in need, including those in the Lyndale Abilene Memory Care center, who were without water because of a broken water main. Water was also donated to the local Big Country Chapter of the American Red Cross.