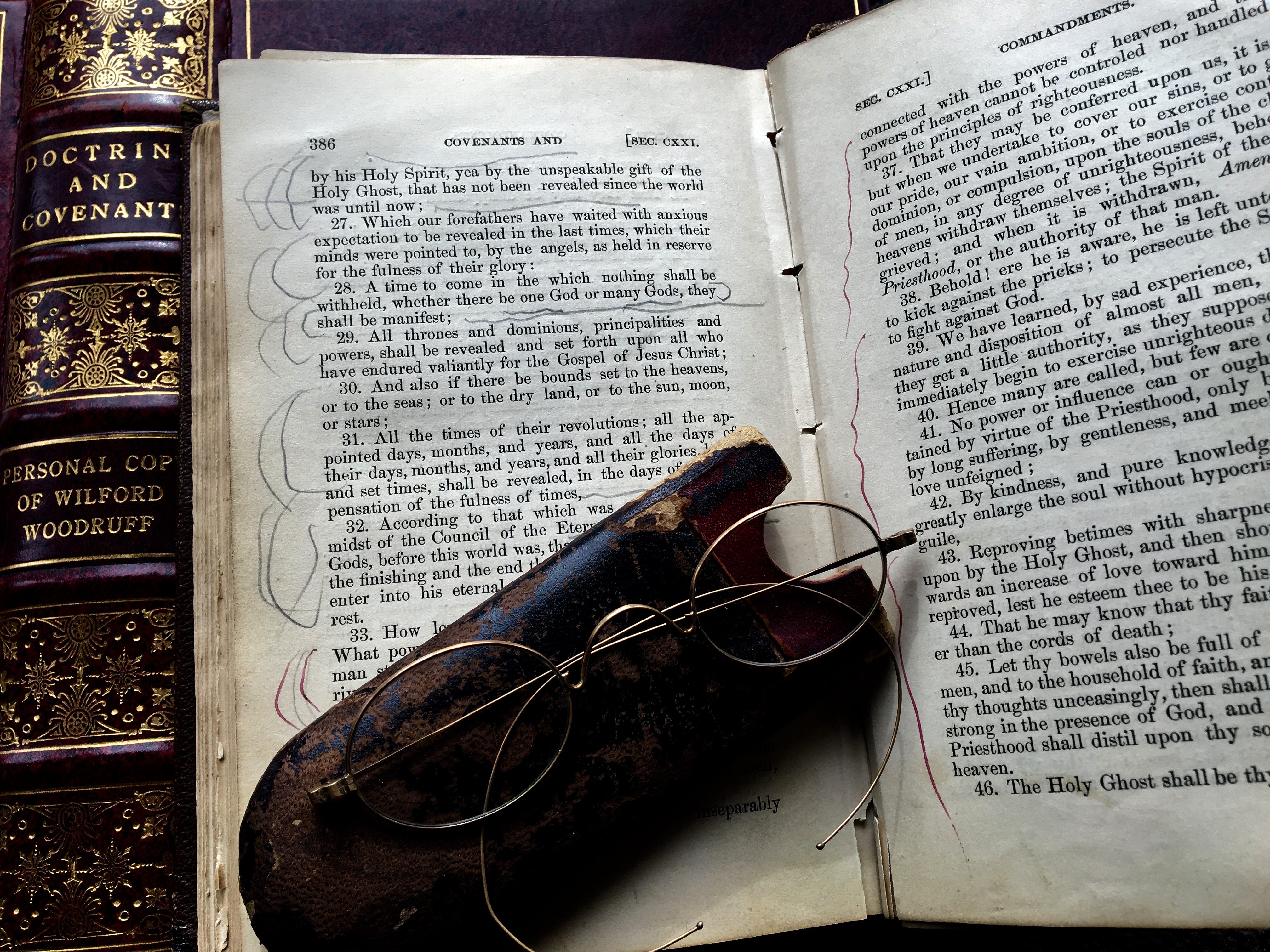 Ten Little-Known Facts About the Doctrine and Covenants

Is Meridian worth 13 cents an issue?  If it is, please become a voluntary subscriber and donate today. We need your support.  Click here. Editor’s Note: See previous articles by Reid N. Moon: Ten Little-Known Facts about the Book of Mormon and Ten Little-Known Facts About the Pearl of Great Price.
A few years ago I was doing research at the DeGolyer Library at Southern Methodist University [Dallas, Texas].  I spent the afternoon wearing white gloves  going through every page of Mary Elizabeth Rollin’s copy of A Book of Commandments. She was the young woman who, with the aid of her sister Caroline, rescued some of the sheets of the Book of Commandments that had been scattered in the streets after a mob destroyed the press in Independence, Missouri on July 20, 1833.
I was especially intrigued by her memories of that eventful day.  In Mary’s own beautiful hand,  she inscribed the following inside the front cover of her book:
“These Revelations were taken from the mob in Jackson County where the Printing Office was torn down–it was in large sheets Just from the press, the Mob threw them into the Street.  Mary E. Rollins and Caroline Amelia Rollins Gathered some of them and ran away, the Mob pursued them but we hid in a corn field.  I saved the first Revelations ever published.”  M. E. [Rollins] Lightner

As I sat there gently thumbing through the text of Mary’s book, it was as if I could feel and see the history that I was holding in my hands.  I could see the mob destroying the press.  I saw Mary and Caroline anxiously awaiting  the opportunity to come out of their hiding place and rescue some of the sheets.  I could feel the tensity in the air as they hid in the cornfield as the mob desperately searched for them.
I could see Mary quietly reassure Caroline that the Lord would protect them as they lay motionless on top of the sheets protecting the revelations.  I could feel the relief felt by these sisters as, later that evening after the mob had left,  they found the printer’s wife, Sally Phelps, and gave her the pages.  And finally, I could feel the immense joy felt by Mary Elizabeth Rollins as she was given this very copy of the Book of Commandments by Oliver Cowdery–after he had finished binding the loose sheets.
I am fascinated by the early history of the Church–especially the history of “how” we got the scriptures.  Here are “Ten Little-Known Facts About the Doctrine and Covenants”:
1.  On September 24, 1834, a little over a year after the Independence press was destroyed , another effort to print Joseph Smith’s revelations in book form was made.  The Kirtland high council appointed Joseph Smith, Oliver Cowdery, Sidney Rigdon, and Frederick G. Williams to select the contents and publish the book.  (A Descriptive Bibliography of the Mormon Church, Peter Crawley, pg. 54, 1997). This book of revelations would no longer be called A Book of Commandments.  Rather, this new volume of scriptures, with additional content, would be called Doctrine and Covenants.  A year later, in September 1835, the first edition of the Doctrine and Covenants came off the press.

2. The first part of the book contained seven lectures “on the DOCTRINE of the Church”.  These seven lectures had been taught in the school of the prophets the previous winter.  These “Lectures on Faith” would become part of the Doctrine and Covenants for the next 86 years.  However, the Doctrine and Covenants committee of 1921, which included James E. Talmage and Joseph Fielding Smith, recommended that the  “Lectures on Faith” be removed. The reason for doing so was stated in the Preface: “Certain lessons, entitled ‘Lectures on Faith’, which were bound in with the Doctrine and Covenants in some of its former issues, are not included in this edition.  Those lessons were prepared for use in the School of the Elders, conducted in Kirtland, Ohio, during the winter of 1834-35; but they were never presented to nor accepted by the Church as being otherwise than theological lectures or lessons“.

1 A great and marvelous work is about to come forth among the children of men. 2 Behold, I am God; give heed to my word, which is quick and powerful, sharper than a two-edged sword, to the dividing asunder of both joints and marrow; therefore give heed unto my word. 3 Behold, the field is white already to harvest; therefore, whoso desireth to reap let him thrust in his sickle with his might, and reap while the day lasts, that he may treasure up for his soul everlasting salvation in the kingdom of God.  4 Yea, whosoever will thrust in his sickle and reap, the same is called of God. 5 Therefore, if you will ask of me you shall receive; if you will knock it shall be opened unto you. 6 Now, as you have asked, behold, I say unto you, keep my commandments, and seek to bring forth and establish the cause of Zion.  7 Seek not for riches but for wisdom; and, behold, the mysteries of God shall be unfolded unto you, and then shall you be made rich. Behold, he that hath eternal life is rich.  8 Verily, verily, I say unto you, even as you desire of me so it shall be done unto you; and, if you desire, you shall be the means of doing much good in this generation.

If you enjoyed this article, you may want to read my two previous columns: Ten Little-Known Facts about the Book of Mormon and Ten Little-Known Facts About the Pearl of Great Price.
——————————————-
For those who are interested in learning more about the fascinating history of the Doctrine and Covenants, I highly recommend “How We Got the Doctrine and Covenants” by Richard E. Turley, Jr. and William W. Slaughter, Deseret Book, 2012.
——————————————–
Reid N. Moon is the owner of Moon’s Rare Books (moonsrarebooks.com) in Provo, Utah.  He and his family are members of the Edgemont 14th Ward in Provo, Utah.
3 Comments | Post or read comments

@Stacy - the 1890 manifesto, or Official Declaration 1 as it is so called, is indeed canon: "The Manifesto was formally presented to the Church at the semiannual general conference held in the Salt Lake Tabernacle in October 1890. On Monday, October 6, Orson F. Whitney, a Salt Lake City bishop, stood at the pulpit and read the Articles of Faith, which included the line that Latter-day Saints believe in “obeying, honoring, and sustaining the law.” These articles were sustained by uplifted hand. Whitney then read the Manifesto, and Lorenzo Snow, President of the Quorum of the Twelve, moved that the document be accepted as “authoritative and binding.” The assembly was then asked to vote on this motion. The Deseret News reported that the vote was “unanimous”; most voted in favor, though some abstained from voting.22" (see: https://www.lds.org/topics/the-manifesto-and-the-end-of-plural-marriage?lang=eng) Morover, Pres. Lorenzo Snow's statement at the general conference is included thereafter, saying: "...as a Church in General Conference assmebled, we accept his declaration concerning plural marriages as authoritative and binding."