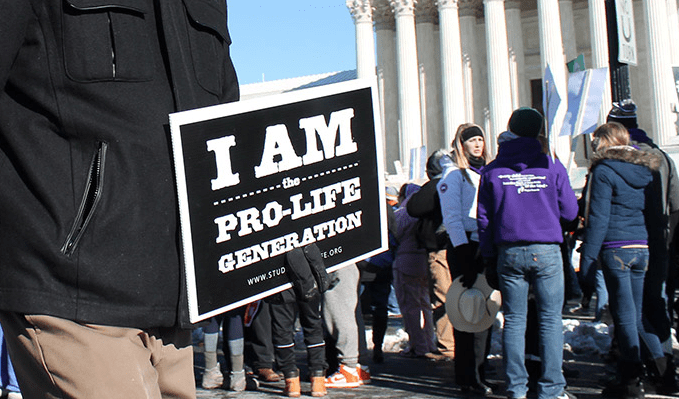 If you’re wondering how effective pregnancy care centers are, just look at how hard abortion activists are working to shut them down! They’ve tried discrediting them, silencing them, and — most recently – using the government to force PCCs into advertising for them. But, thanks to five justices on the U.S. Supreme Court, states like California won’t be able to use the government to push around pregnancy care centers anymore.

After a long, three-year battle, the court issued its ruling today making clear that if abortion clinics want more business, they won’t be able to bully PCCs to get it. By a 5-4 decision, they struck down the extremists’ “Reproductive FACT Act” that actually ordered these pro-life centers to promote the one thing they’re trying to discourage: abortion!

Under the law that Governor Jerry Brown signed in 2015, every pro-life center had to post information in huge 48-point font — sometimes in as many as 13 languages — about where these mothers could get a free or low-cost abortion. As if that weren’t enough, California officials decided to bleed the centers dry, fining them $500 on the first day, and up to $1,000 every day if they didn’t comply. National Institutes of Family and Life Advocates (NIFLA), which is affiliated with about 1,500 PCCs in America, filed suit, saying the law forces its centers to become “abortion referral agencies.” Not to mention that most of these PCCs operate on a shoestring budget, and fines in the thousands of dollars would have totally devastated them.

Fortunately, after today’s groundbreaking win, the only thing that’s devastated is country’s abortion movement. Nothing, the majority argued, could be more unconstitutional than regulating speech. Yet that’s exactly what the FACT Act does. Just as we’ve seen with bakers, florists, and even therapists, liberal activists are using the government to force people to communicate a message that violates their beliefs.

“The Ninth Circuit… concluded that the notice regulates ‘professional speech,’” Justice Clarence Thomas wrote for the majority. “But this Court has never recognized ‘professional speech’ as a separate category of speech subject to different rules. Speech is not unprotected merely because it is uttered by professionals… As with other kinds of speech, regulating the content of professionals’ speech ‘pose[s] the inherent risk that the government seeks not to advance a legitimate regulatory goal, but to suppress unpopular ideas or information.’”

Justice Anthony Kennedy tackled the topic of free speech in his concurring opinion, writing that Americans should all re-read the First Amendment as ratified to understand “the history of authoritarian government as the Founders then knew it; to confirm that history since then shows how relentless authoritarian regimes are in their attempts to stifle free speech; and to carry those lessons onward as we seek to preserve and teach the necessity of freedom of speech for the generations to come.” Governments, he insisted, “must not be allowed to force persons to express a message contrary to their deepest convictions. Freedom of speech secures freedom of thought and belief. This law imperils those liberties.”

What if California had made a vegan grocer advertise for the local butcher, or forced Alcoholics Anonymous to post directions to the nearest liquor store? Everyone would agree that’s ridiculous, including – fortunately — this Supreme Court.

For attorneys at Alliance Defending Freedom (ADF), who are celebrating its second SCOTUS victory of the month, today’s opinion had something in common with the Jack Phillips’s bakery win. “No one should be forced by the government to express a message that violates their convictions, especially on deeply divisive subjects…” This case, NIFLA President Anne O’Connor told reporters, “is not just about whether or not to hand out abortion information on a piece of paper or post it on the walls of our pro-life centers. It is about the right belonging to all American citizens to be free from government-compelled speech, and from being coerced into promoting a message that contradicts their values.”

Meanwhile, the victory is another reminder of just how significant the election of Donald Trump was. It’s sobering to think what could have happened to pregnancy care centers, Christian bakers, and a whole host of other issues had Neil Gorsuch not been confirmed to the U.S. Supreme Court. As Jonathan Tobin pointed out in an op-ed a few months ago, America could have easily been stuck with a deadlocked court that left atrocious laws like California’s in place.

“Had Hillary Clinton beaten Trump in November 2016, Neil Gorsuch wouldn’t be on the court. It’s not clear that Garland or anyone else would be sitting in that seat either, because there’s no way of knowing whether Clinton could have persuaded a Senate that was still controlled by the Republicans to replace Scalia with anyone but another conservative. It’s entirely possible that we might still be stuck with a Supreme Court vacancy today if Clinton had won. But Clinton didn’t win. Gorsuch was confirmed, and that fact remains the single most potent argument in favor of voting for Trump two Novembers ago.”

The president may try the nation’s patience at times, Tobin admits, but the “SCOTUS docket is a reminder how much good his election has done, too.”