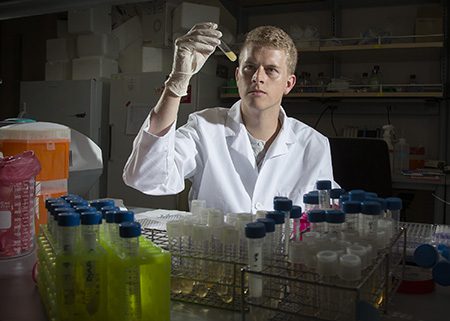 Student goes after MRSA after it costs father his leg

MRSA is bad news. If you’ve never heard of it, here’s what you need to know: It’s pronounced MER-suh, it’s a nasty bacterial infection and it can cause serious disease and death.

Hatch was thousands of miles away on an LDS mission whenMethicillin-Resistant Staphylococcus Aureus decalcified the bones in his dad’s foot and lower leg, leading to an emergency amputation just below the knee.

“It was really hard to hear the news—you never expect to hear someone in your family having to have a limb amputated,” Hatch said. “I felt helpless being so far away.”

Now Hatch is exacting revenge on the bacteria. Researching alongside assistant professor of microbiology and molecular biology (and brother-in-law) Bradford Berges, Hatch is unlocking the power of a new MRSA-killer: bacteriophage.

Phages are viruses that seek out, infect and kill bacteria. BYU researchers have successfully used them to save beehives from American foulbrood, and now they are harnessing their abilities to find MRSA and eliminate it.

In a recent study published in high-ranking journal PLOS One, Hatch, Berges and colleagues demonstrate the ability of phages to decontaminate (kill off) human MRSA bacteria from both hard surfaces (glass table top) and fabrics (lab coat).

The findings on phage effectiveness against MRSA are increasingly vital since the deadly bacterium is now resistant to almost all available antibiotics. Doctors worry that the one antibiotic that can still treat MRSA—vancomycin—may soon be ineffective as well.

MRSA is most problematic in hospitals and nursing homes—places where the sick and wounded are susceptible to infection. Berges said about 30 percent of humans are carriers for the bacteria, but it only “gets nasty” when it penetrates the skin.

People who are infected can develop sepsis, pneumonia, meningitis or even die. Fortunately, Berges and Hatch’s research is showing that phages kill more than 99 percent of MRSA pathogens.

“And while phages kill off bacteria, they will never cause any problems to humans because it’s a virus that’s evolved to infect bacteria cells,” Berges said. “It’s never going to infect human cells—it’s not even a possibility.”

To date, the research team has identified six unique phage types that can kill off MRSA. Their future research will identify even more MRSA-killing phages.

Thanks to the mentoring of Berges, Hatch has now published as an undergraduate student and is in prime position for medical school next year. He hopes his work can prevent others from the challenges his dad has faced.

“This research is my way of coping with it and feeling like I’ve been able to do something to solve these type of problems,” Hatch said. “It’s been so rewarding to see that it is working.”

MRSA is commonly treated with a very well known (and inexpensive) antibiotic called Bactrim. MRSA is resistant to beta lactams, which are all penicillin based antibiotics. the statement that the only antibiotic left to treat MRSA is vancomyicin is not accurate. As a microbiologist who isolates and identifies sensitivities for bacterium, I thought I'd make an important correction in the article. Thanks for the inspiring story otherwise!

This is one of the most inspiring reads about a fellow undergrad student taking his destiny into his own hands and finding a way to change the world around him because of a deeply personal experience. This one really hit close to home for me because I myself nearly died of a MRSA infection while I was serving my mission. I had to have two different surgeries while out in the field (one an emergency surgery), I developed sepsis, and I contracted Scarlet Fever as a result of a severely compromised immune system. MRSA is no joke. Way to go Jacob!