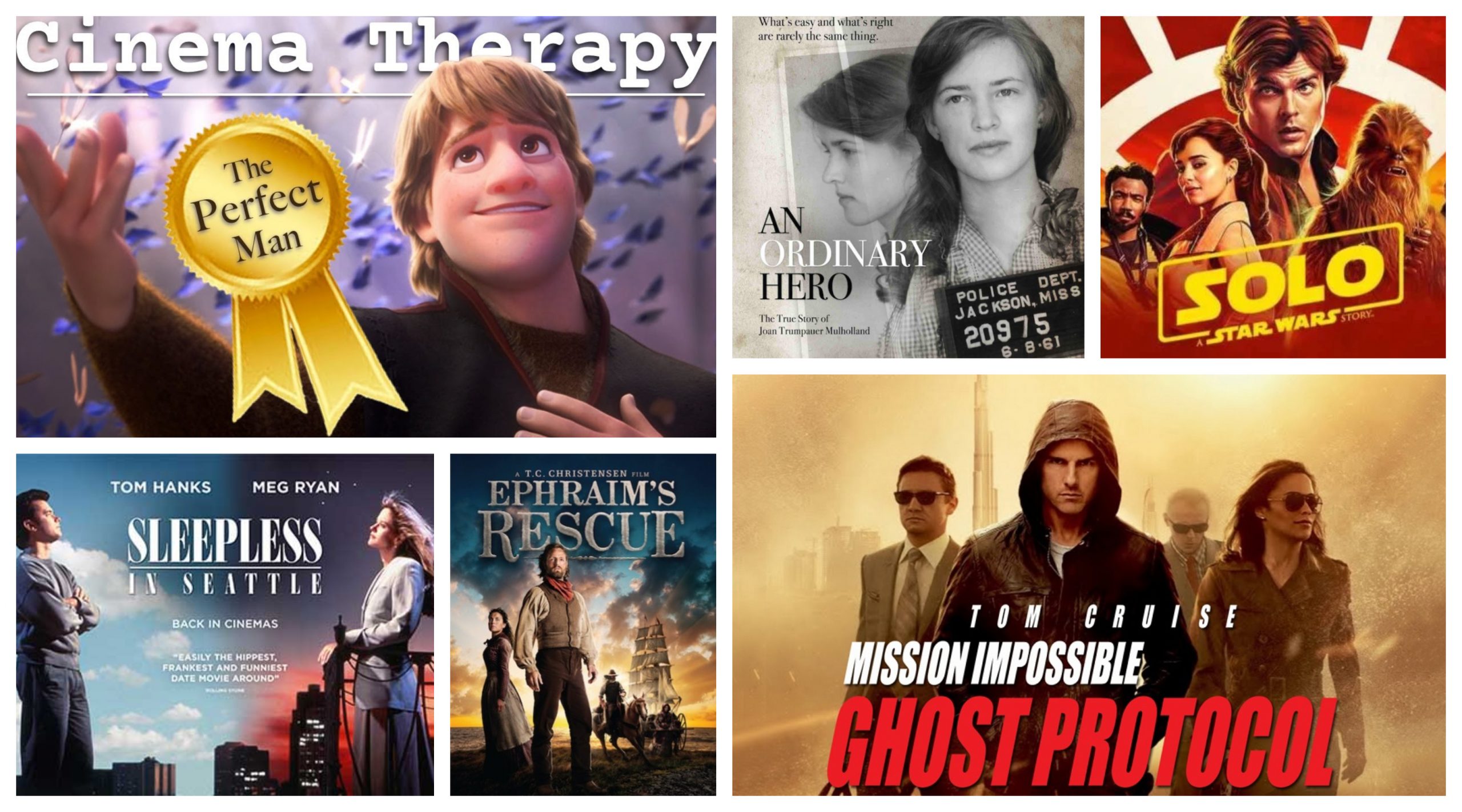 Cinema Therapy is a YouTube channel begun by two Latter-day Saints, one a therapist (me) and one a filmmaker (Alan Seawright). We explore uplifting themes and meaningful lessons in popular films. This week we explore how Frozen 2 demonstrates a healthy, Gospel-compatible approach to balancing needs between partners in relationships. Watch our new episode above and rent/buy the films here.

An Ordinary Hero. Gripping documentary about civil rights hero Joan Trumpauer Mulholland, told by her son, Latter-day Saint filmmaker Loki Mulholland. A vital watch for our times. Stream it on Living Scriptures or rent/buy it here.

Solo: A Star Wars Story just debuted on Disney Plus. Prequel explores the origins of Han Solo, including his budding friendship with Chewbacca and how he acquired the Millennium Falcon.  Stream it on Disney Plus or rent/buy it here.

Sleepless in Seattle. Classic romantic comedy about a woman looking for the widower whose story she heard on the national radio. Tom Hanks and Meg Ryan at their best. Rated PG for mild language and some innuendo. Stream it on Netflix or rent/buy it here.

Mission Impossible: Ghost Protocol- The Kremlin explodes. A rocket threatens a city. Tom Cruise scale’s the world’s tallest building. A team works in harmony when everything goes wrong. Arguably one of the greatest action films ever made. Stream it on Hulu or rent/buy it here.

Ephraim’s Rescue. T.C. Christensen follows up 17 Miracles with this sobering and uplifting true story about Ephraim Hanks, a Latter-day Saint who risked his life to save handcart pioneers freezing and starving to death on the plains.

The Patriot stars Mel Gibson as a Revolution-era pacifist father whose hand is forced when his family is threatened. Along the way he discovers a passion for freedom. The film is 20 years old this year. You can rent or buy the film from Amazon and apply Clearplay filters.

Adventures of TinTin, combines the talents of Steven Spielberg and Peter Jackson to give us a two-fisted animated adventure tale for older kids and up. A rollicking good time for the family. Stream it on Crackle or rent/buy it here.

Charlotte’s Web. You know the story. But have you seen the modern version? Great for parents and children. Stream it on TubiTV or rent/buy it here.

Paths of Glory. Kirk Douglas stars in this highly-rated forgotten classic, in which a commanding officer defends three soldiers accused of botching a WWI mission. Watch it free on Vudu or rent/buy on Amazon.

Galaxy Quest. Parody of Star Trek finds the aging stars of a sci-fi TV show combatting actual aliens. If the premise doesn’t sell you, the razor sharp screenplay and hilarious cast will. A classic modern comedy.  Rent or buy it here.

One-Man Lord of the Rings. In 2005 I won the campus-wide Brigham Young University talent show for my impressions, in this case playing seven different characters from the beloved trilogy and interacting with myself.

“Sleepless in Seattle” is NOT a family movie.