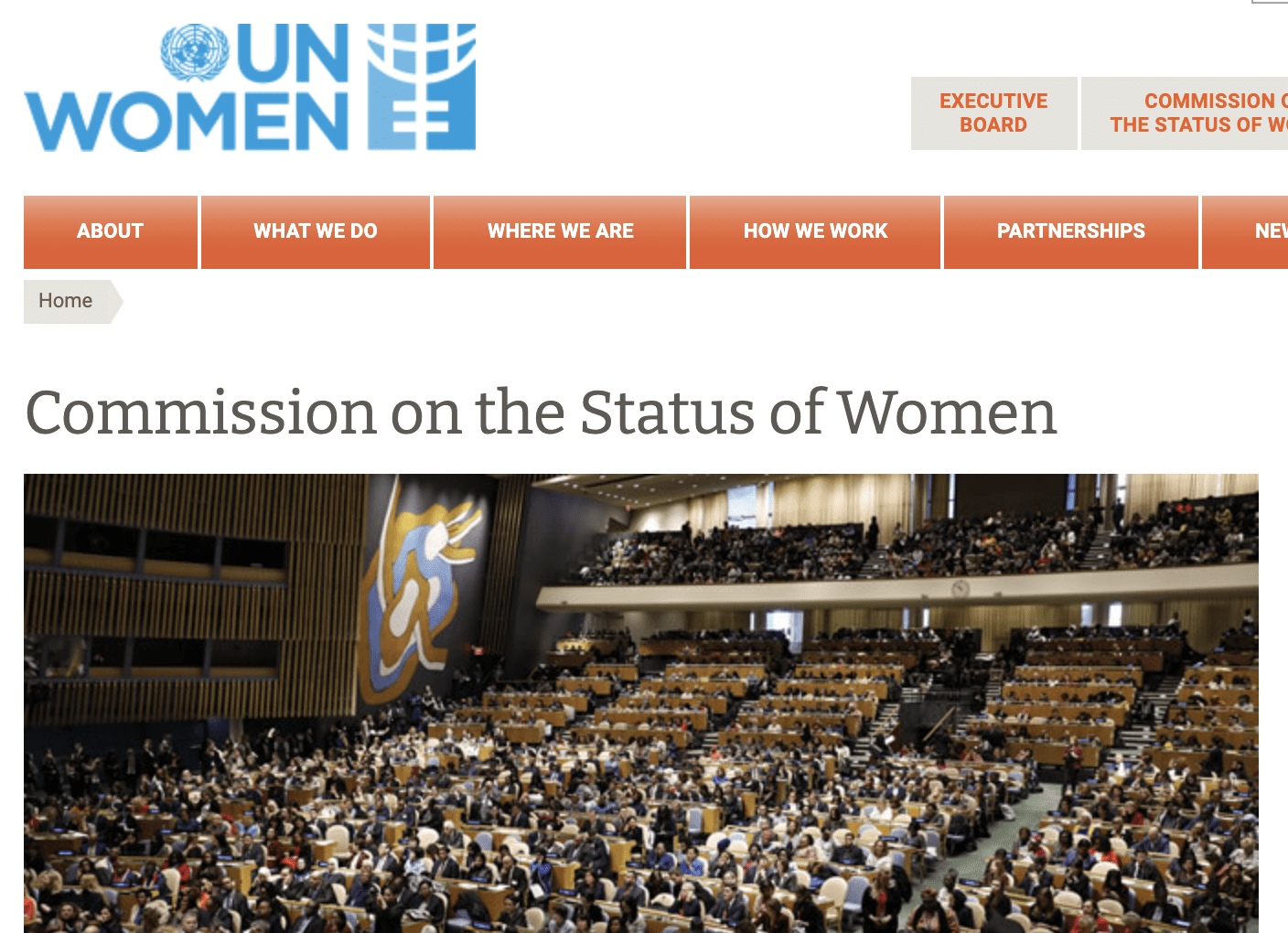 The United Nations’ annual Commission on the Status of Women (CSW) recently concluded, and, true to form, the Commission continued its assault on the family, parental rights, the health and wellbeing of children, and religious liberty. CSW, in the words of its organizers, “is largest annual gathering on gender equality and women’s empowerment.” Because of a woman’s role as a mother, the family finds itself at the heart of negotiations at CSW.

The goal of every conference held by the UN is to produce a document designed to guide nations in addressing societal issues and formulating policy. While delegates participate in negotiations regarding that document, non-governmental organizations (NGOs) take part in events held concurrently during the commission. Normally, as part of our mission to educate and mentor the rising generation, United Families International brings university students with us to CSW. Covid restrictions prevented our doing so in 2021, but that did not stop the UFI team from representing and defending the family.

United Families International team spent over two weeks monitoring the activities of the annual UN Commission on the Status of Women.  Due to Covid, except for UN personnel and country delegations, the Commission was conducted in a virtual format.  With approximately 100 UN Side Events, 700 parallel events and highly contentious negotiations for the “Agreed Conclusions,” we were busy!  Some people at the UN were less than happy to see us engaged!

While monitoring a virtual parallel event titled: “Diversity as a Driver: LGBTQI inclusion in feminist and social movements,” a UFI staff member participated in the Q&A by placing her question in the chat section. Rather than respond to Kristen’s question, the event organizers berated her and then removed her from the Zoom event, completely.  Kristen’s question? “How do you define a woman?”  Seems this is a fair question to ask during a conference that is centered on women’s rights – and Kristen’s expulsion was not an isolated incident.  A pro-life ally from another organization had a similar experience when she drew attention to the fact that sex-selective abortion discriminates against girls. As a consequence, organizers revoked this woman’s access to all remaining CSW events. The irony is astounding considering this year’s theme: “full and effective participation and decision-making in public life.” It’s interesting what will get you labeled as a heretic these days!

Here’s a somewhat tongue-in-cheek list a staff member made of the top eleven things she learned from virtually attending this year’s CSW:

Needless to say, many of the parallel and side events were controversial and extreme.  But this is the reality of CSW and it’s one of the reasons we feel the strong need to monitor and report on these events.

What happened with the CSW Outcome document or “Agreed Conclusions”

UFI began, weeks prior to the actual commission, to analyze the Agreed Conclusions draft, communicate with delegations, create language grids for negotiations and offer assistance. The “zero draft” which began with just five pages, swelled to 65 pages at one point in the negotiations, as it was laden with controversial language, and finished on the last day of CSW at 21 pages.  (See the advanced unedited version here.)

We took the new U.S. administration’s CSW representatives at their word as, early on, they indicated their focus for CSW:

“Our delegation is pushing SOGI [sexual orientation/gender identity]- specific language, but also “all women and girls in all their diversity,” and those who experience “multiple and intersecting” forms of discrimination; of course strongly supporting references to SRHR [sexual and reproductive health and rights]and CSE [comprehensive sexuality education]…”

All the bolded language and acronyms, above, read like a wish list for the anti-family forces. The U.S. delegation was true to its word as it joined with the European Union, Canada, the UK, Australia, Scandinavian countries, and others to pack the outcome draft with the controversial phrases mentioned. In addition to “LGBTQI+” rights, abortion rights and sexual rights, including for children, there was a push to minimize or remove important references to parental rights, protecting the family, recognizing the importance of motherhood, and the role of mothers as leaders in society.

The final version of Agreed Conclusions includes highly concerning phrases and paragraphs such as:

Despite this, there were no major advances for anti-family/anti-life forces beyond what they gained during previous Commissions on the Status of Women.  For that we are grateful.

One major loss, however, was the removal of a paragraph protecting each country’s sovereign rights with “full respect for various religious and ethical values, and cultural background of its people.”  This type of language is a critical bulwark against assaults on religion and religious freedom and the fact it was targeted by progressive countries, including the U.S., speaks volumes – none of it good.

In spite of the continued intimidation and bullying by the so-called progressive countries, there were many delegations that stood firm in defense of family and life.  Although these delegations were falsely accused of “repression of women’s rights,” the fact is they were heroes in their efforts to push back against a controversial, women-and-girls-harming agenda.  Those who deserve our special thanks include Bahrain, Saudi Arabia, Russian Federation, Sudan, Nicaragua, Brazil, and the ever-steady Holy See.  For those interested in viewing the closing session of CSW and hearing some of the countries voice their concerns and reservations, the UN records and makes the meeting of delegates available to the public here.

It is disheartening to see the United States once again joining the EU at the United Nations in promoting anti-family and anti-religion language in the name of women’s rights and gender equality. However, we are encouraged by those countries that resisted  the  “more ambitious” language hoped for by U.N. Women Executive Director Phumzile Mlambo-Ngcuka and vow to continue to help those courageous nations that stand up to United Nations overreach in dismantling rights guaranteed to the family as the “natural and fundamental group unit of society.”

Thank you for your efforts and sharing your experiences.