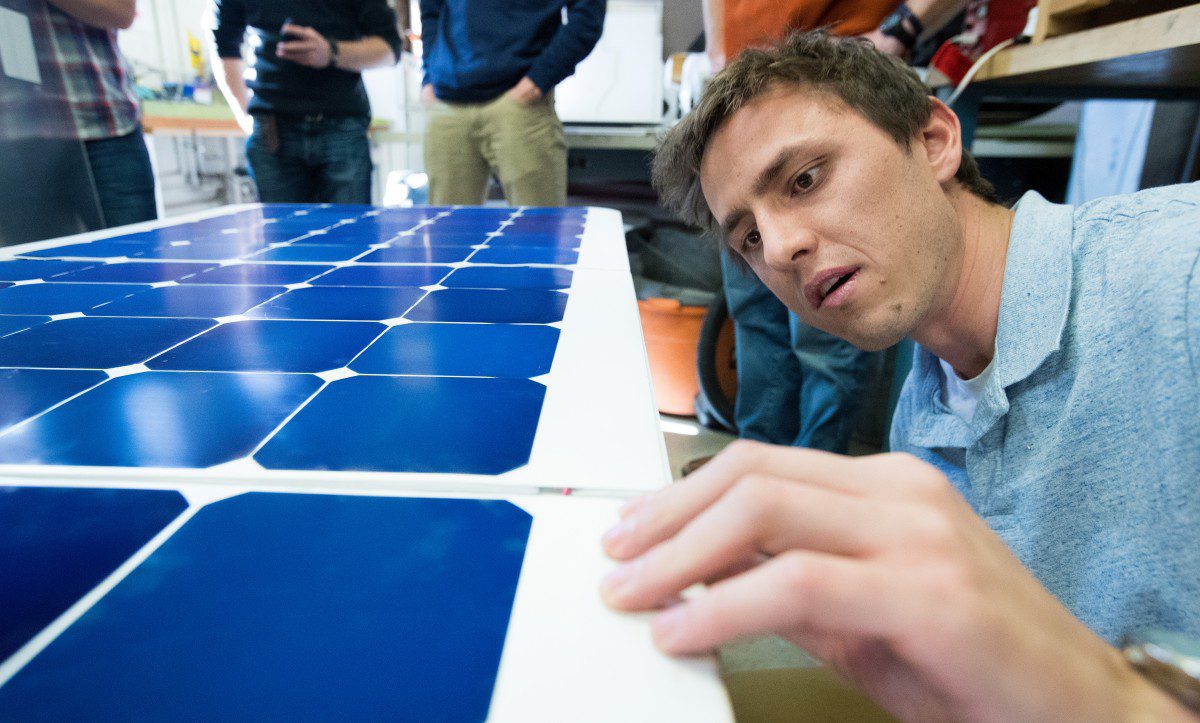 A group of BYU engineering students want to start a solar-cell revolution.

Led by mechanical engineering professor John Salmon, the students hope to trigger energy change by installing solar cells in public locations you wouldn’t think of, such as:

… all with the idea of providing clean-energy charging spots for personal mobile devices.

And here’s the thing: The students aren’t just throwing ideas against the wall to see what sticks. The project caught the attention of the Ford Motor Company Fund, resulting in BYU receiving a $25,000 grant to fund their efforts to address growing energy consumption.

“Current power-generation capabilities will not be enough to meet the energy demand in the future,” said Christopher Running, an electrical engineering major on the Open Access Solar team. “We believe solar technology is the most promising solution to the upcoming energy gap.”

With funding in hand, the students are already knee-deep in step 1: Building solar panel tables that allow people to work and charge devices at the same time. The prototype of the first table is in its final stages and will be in device testing over the next few months.

They plan to install the tables on campus and will focus on locations with good window light and high student traffic. Already they’ve been in discussions with the Harold B. Lee Library about putting a table in a common study area.

“Ultimately, we believe we can provide a way for people to charge their mobile devices while waiting for the bus, watching their kids play at the park, while stuck in a traffic jam and at countless other public locations where solar-cell technology could be available to all citizens,” Salmon said.

Students also plan to develop an app that will allow users of their solar technology to track energy savings, and motivate other BYU community members to become involved. As people save energy and track their progress on the app, they win points towards prizes.

As this technology expands and improves, this solar team has other hopes and goals for their solar revolution as well: They will also work with local elementary schools, universities and public libraries. They plan to partner with Rock Canyon elementary school to start, but are currently looking for other organizations also interested in setting up a solar table.

“We foresee this project making a difference in the community by reducing the demand for non-renewable resources,” said student Justin Roberts. “The hope is to provide local, readily available energy, decreased electrical expenses, reduced pollution and increased comfort and familiarity with solar technology.”

Open Access Solar was originally founded in 2015 by Justin Roberts, Christopher Running and Justin Halversen, alongside Dr. Salmon. Other organizations interested in working with the team can reach out directly to John Salmon.

About The Ford College Community Challenge

Through the Ford College Community Challenge, Ford Motor Company Fund aims to support colleges and universities as they work with students to design and develop tangible community projects that address critical local needs in new ways, with a focus on helping the community become a more sustainable place to work and live.