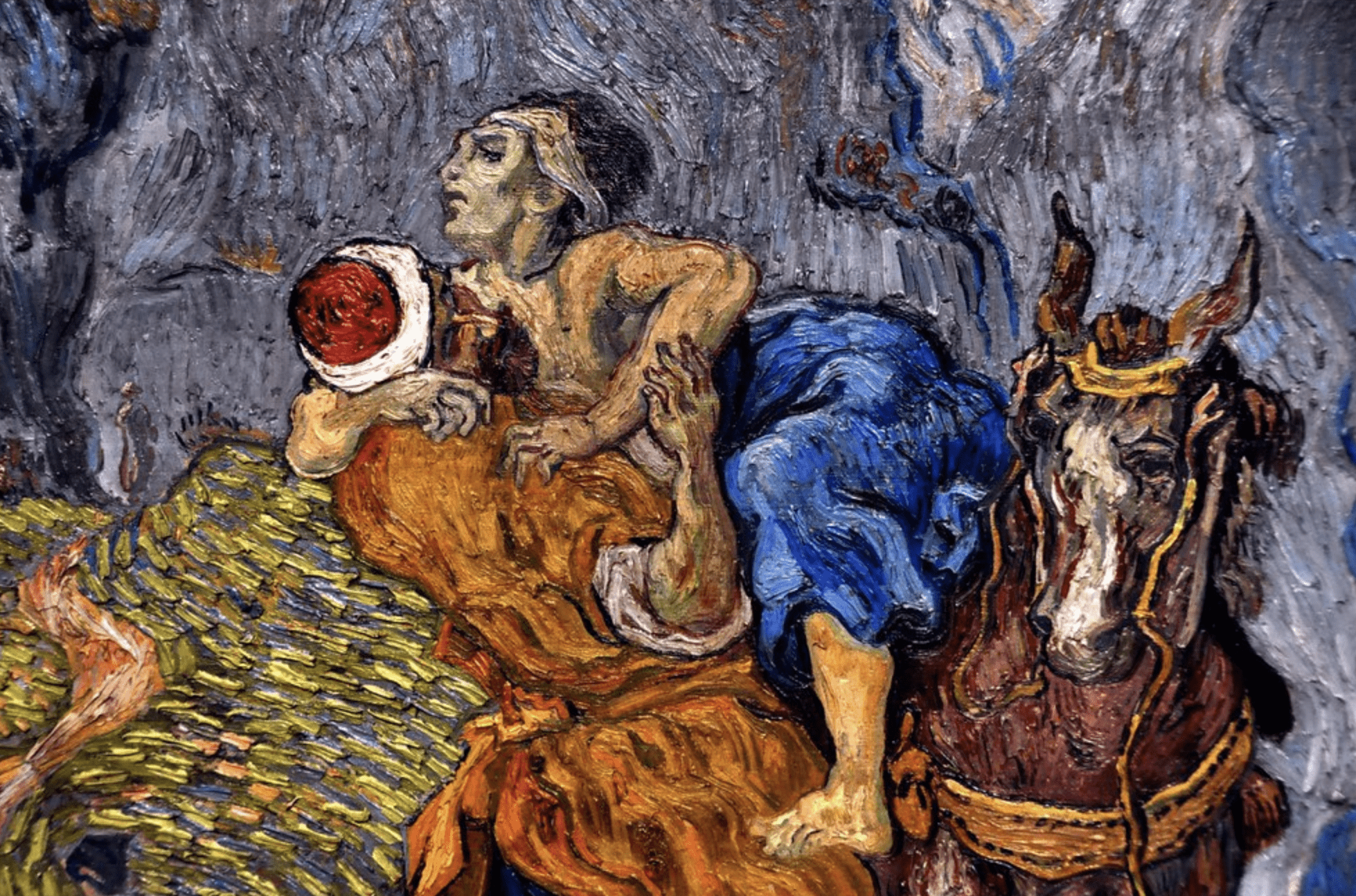 The setting is The Holy Land during the second year of Christ’s ministry.  Three times, Christ has spoken of the two great commandments[i]

Twice, He spoke in response to doctors of the law and a scribe. All were most likely Levites.  They had asked of Him, “What is the great or first commandment?”  But He always included a second.  The Luke version has Him answering a different question, “What do I do to gain eternal life?”  With this hierarchy in mind, His answer to the self-justifying Levite doctor tells of a Levite who did everything right by the law; yet came to understand how wrong he actually was.  Even recently, President Oaks warns us of how wrong we might actually be in doing what the Christ SEEMS to be teaching us in this parable of the Good Samaritan. [2]

The parable is well known from Luke’s account. However, let us look at it from how it may have been experienced by the injured, needy, intolerant, orthodox Jewish man that went down from Jerusalem.  He is speaking to a group in Nazareth.

“I have finally come to you today after several weeks of tardiness.  I apologize for not being here as expected, but I want to share the life-altering experience that delayed my arrival.  From my home in Jerusalem, I had agonized for weeks over how to travel to Nazareth.  The way by the sea is so long, and I just could not arrange an extra day’s travel.  Taking the short route through Samaria was simply unquestionable.

I must admit that, because I have avoided contact with Samaritans in order to remain clean by the law, I did not know them.  Yet, I detested them with their false understanding of the Torah and the holy laws.  They are indeed unclean and are to be shunned…. or that was my thinking at the time.  That left me with only one road to take, the Jericho road, as you know.  I do not travel much, but the stories of robbers and bandits brought me great anxiety.  I tried to find others with whom I might travel but could only confirm that the High Priest and a Levite would be traveling the road sometime that day.  I could not ask them to travel with one such as I, but I took comfort in knowing that they too would be on the Jericho road that day.  It seemed more likely that God would protect us all – the faithful.

I do not remember much after the descent from the city, because I was brutally attacked. I do not know how long I lay unconscious.  I vaguely remember coming to awareness in the heat of the sun.  You know how hot it can get around Jericho.  I was so thirsty, but as I tried to mentally inventory my injuries and my supplies, I could feel that my condition was serious and that all was lost.  Just then, through one blurry eye and a beaten face, I caught sight of an approaching figure.  Hope kept me conscious, but all I could manage was a low groan.  Could it be?  The very High Priest was approaching… surely God had delivered me!  I groaned again but could not speak.  Then, to my disappointment, he passed on the other side of the road.  I should have known that with all my bleeding wounds, he could not stop to help without contacting my blood – which would deem him unclean and hence, unable to complete his divine mission.  ‘If only he could have thrown me some water,’ was my last fading thought as I drifted into a painful stupor.

I do not know how long I baked in the sun, but my battered body stirred again as I heard the sounds of shuffling sandals. I could just make out the Levite hem of his robes.  Certainly, this was God’s instrument sent to rescue me!  This was a man who handled the blood of the sacrifices; one who served God night and day.  Hope, again arose in my fevered, beaten, half-paralyzed body…but he too passed to the other side, unwilling to set aside the law and compromise his divine errand.  Perhaps, in all my efforts to keep the law and stay faithful to God, I had failed and was, myself, unclean.  Perhaps God just did not love me…or was there even a God for ordinary people like me?  I must have drifted into a thoughtless coma as I blistered in the unmerciful fire of apparent divine retribution.

Suddenly, I felt cool soothing water upon my parched lips and then across my sunburned brow.  Had I died, what was happening?  Amidst all my confusion, I felt the sting of cleansing in the wound under my eye, then my arm….  I could smell the wine, but my eyes were swollen and opening them was difficult.  I felt the soothing healing of olive oil…. almost an anointing.  The relief was almost immediate so that once my face had been cleansed with water and wine and wiped ever so gently with oil, I could open one eye.

Oh, the shock that vehemently shook me to my core.  Peering down at me was a detestable, filthy Samaritan!  I cannot describe the horror and revulsion that filled my aching breast, but I was too injured to recoil or resist.  I was at his mercy.  What could he want of me? After all, I had lost everything.  Oh, God, beyond my hopes, save me from this indignity!  I searched his face as he loomed over me.  Those eyes!  They were so filled with compassion.  Was it…love? His touch was so tender and soothing as he worked carefully to anoint my cleansed wounds.  Who was this man rejected of the Jews but so loving and tender to this lowliest of them?

I do not remember much as I drifted in and out of awareness, though I did feel a healing relief sweep over me.   I vaguely remember being aware of awkwardly riding on his donkey and a voice of another say, ‘he looks half-dead,’ as darkness crept upon us.  I woke several times through the night to shift – searching for comfort.  However, with each turn, I found new pain.  “Half-dead” felt more like “should be dead”…perhaps death would bring relief, but what would I find there from a God that had allowed such calamity into the life of one who had tried so hard to serve Him?  But… had He sent the Samaritan?  Would He send a Samaritan?  At first, I thought, perhaps satan had sent him to mock me, but the love and tenderness, the compassion and care could only come from God…was I loved after all? But… then why all this…?

I woke to voices and heard, ‘Here is two pence, take care of him; and whatsoever thou spendest more, when I come again, I will repay thee.’  I thought that curious.  Surely, I was in worse shape than what two pence would cover!  I paid my laborers more than that for two day’s work.  And, what kind of care could I receive from an under-paid innkeeper?  How would he feel about being required to add physician’s care for a dying man to his busy business?  And, what was this about spending his own money trusting that this Samaritan would return and actually repay…we didn’t know each other… or rather I didn’t know him but the look in those loving eyes…?”  Then I realized that two pence were what I did pay each year to the temple as the temple tax, so that I might be included in the redemption of Israel on the holy day of Atonement!  Who was this Samaritan, after all, that paid the price of redemption to save me from death?

I recovered, as you see.  I never saw the Samaritan again but the innkeeper, himself as tender as the Samaritan, said that he would await his return and that he trusted him implicitly.   I still don’t fully understand all that happened but hope to be furnished further enlightenment with the passage of time.  But here is what I know now.  God does love me and uses almost anyone willing, to do his work of salvation.  I know that love surpasses prejudice.  I know as sacred as is the law, that by itself it cannot save us.  We await a Messiah, but in the meantime, we have each other, Samaritans and innkeepers.

I can’t say that I have stopped to help every ailing soul since then, but I cannot pass by without assuring there is an inn-keeper handy, for each is loved by the very God who loves us and from whom we yearn to be loved.  Some would be loved and accepted but themselves reject God and live outside of what is acceptable… the Samaritan – I thought.  But I found that I could accept his love and love him for saving my life even though I don’t accept the strange gods of the Samaritan people.  I have wondered if he was just a different Samaritan or whether, God chose him to represent another who also may be rejected by us, as I found in Isaiah.  And, unless we are obedient to God and His divine Spirit, we may miss knowing Him and who He empowers us to become as we, like Him assist the wounded, as I have also come to see, we all are, to come to the Father.”

To those who would like to explore this redemptive parable more in-depth please consider a chapter in the small collection “Parables of Redemption” available  from the BYU Bookstore or on Amazon here  https://www.amazon.com/Parables-Redemption-Restored-Doctrine-Atonement/dp/0882908340/ref=sr_1_1?keywords=parables+of+redemption&qid=1579330472&sr=8-1

[i] Matthew 22:37-40 Tempting Lawyer/Pharissee “Master, which is the great commandment in the law?”

Luke 10:25-37 Tempting Lawyer: “Master, what shall I do to inherit eternal life?”  Then, wanting to justify himself, “Who is my neighbor.”

[2] “This means we are commanded to love everyone, since Jesus’s parable of the good Samaritan teaches that everyone is our neighbor. But our zeal to keep this second commandment must not cause us to forget the first, to love God with all our heart, soul, and mind. We show that love by “keep[ing] [His] commandments.” God requires us to obey His commandments because only through that obedience, including repentance, can we return to live in His presence and become perfect as He is.” President Dallin H. Oaks, conference Oct 2019, “The Two Great Commandments”