Rootstech: How We Can All be Heart Specialists | Meridian Magazine 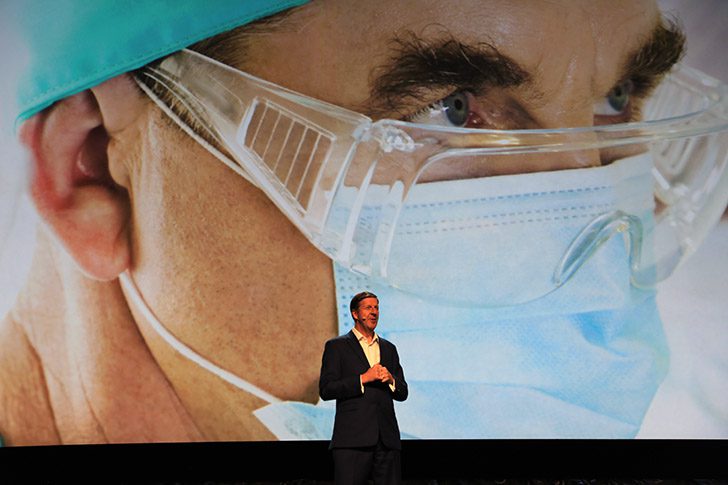 Rootstech: How We Can All be Heart Specialists

You might say it’s the largest studio audience in the world. 25,000 people from all 50 states and from 40 nations descended on the Salt Palace Convention Center in Salt Lake City for the three-day, Feb. 4-6, Rootstech convention, but it is only a studio audience, because the sessions will be broadcast in the next weeks to another 125,000 in 1500 locations around the Church.

Rootstech, which continues to skyrocket in attendance each year, offers something for everybody.

It is a hopping place with a Guinness Book of World’s Record-breaking largest genealogy wall chart in the world, measuring 30 x 100 with 200,000 names; a Freedman Bureau Index-a-thon with the goal of indexing 900 batches in 90 minutes; and an Innovator’s competition, which brings the best new ideas using technology in family history that anyone can dream up.

It may have once been that a family history conference like this was only for the enthusiasts and the techies—those who really knew how to noodle their way their intricacies of family history, but not any more.

Stephen T. Rockwood, the managing director for the Family History Department and President/CEO of FamilySearch International says this convention is for all those who can become interested—those whose hearts can be touched through the power of story.

Here people can wander through booths of 360 exhibitors showing everything from how to create memory books to how to test your DNA, a market of technical tools for creating and disseminating family history that your genealogist aunt could never have imagined.

Here, each year, cousins find each other and in the tech competition, the right ingredients come together for the birth of new companies. Here scores of classes are offered on every possible topic in family history aimed at every level from beginner to expert.

Rootstech manages at the same time to be both exciting and inspiring.

The secret is found in this. At the first session of the conference on Thursday morning, each participant had a medical mask on their seat. Rockwood explained why. Those who are willing to delve into their family’s stories become the heart specialists for their family, binding them with the history that connects and grounds family members. This is a convention to train thousands of new heart specialists.

“When I was a boy,” he explained, “my heart was so weak, I could barely walk up the hill to my school. I had open heart surgery at age 8.”

He asked, “Do you think that as a boy I wanted anyone playing with my heart? This surgeon didn’t try to impress me with his background or education. What got me to trust him was his extremely colorful and funny ties. Because he delivered his relationship to me with a dose of fun, I was all in.”

In family history, Rockwood suggested, if you want to to change hearts, we have to change our approach. We can capture our family’s interest in genealogy not by talking to them about the details of research, but by telling them family stories.

“Our ancestors were real, living people. Getting to know them is the reason to do family history, because it will really bless your life.”

He said, “Your family needs what you have. Psychologists have said children who have a sense of strong family heritage are much better off and much more resilient than those who don’t.

“What about those who are aren’t family history enthusiasts? This is not just about connecting with your cousin somewhere who is an enthusiast, but to connect better with people who are right there at home.”

Rockwood told his own story to illustrate a point. One year for Christmas, when he was ten years old, he asked for a BB gun because he was certain his parents would not let him have one, but he thought Santa might give in. To his great surprise he received a BB gun for Christmas, and as he was sitting in the living room on Christmas morning, reading the responsibilities of owning a BB gun, he noted one important rule. Never shoot inside the house. To his great surprise, his Dad came in, took the BB gun, aimed at a glass Christmas ornament, shot the gun and shattered it to pieces. “Don’t tell your Mom,” he laughed.

Another Christmas just a few years later, this same father sat down with him and his siblings and shared his deepest feelings about the true meaning of Christmas and his never-ending love for each of them. He made heartfelt promises to them if they would always live by what they knew to be true.

Little could they have known that he would die the following Father’s Day, but Rockwood’s father lives on in the lives of his grandchildren in the stories that they tell.

He asked if there was someone like that in all of our lives. Can we tell stories about them and about ourselves to each other to bond the family?

Where is FamilySearch Going?

FamilySearch continues to explode in resources, ease of use, and influence. Rockwood outlined the following areas:

Discovery Experiences: FamilySearch offers Family Discovery centers where people can have experiences with their ancestors—charting where they came from, who was the first baptized in their family, what nationalities make up the mix of who they are. Different kinds of discovery experiences are available online and FamilySearch.org What is remarkable is that through these activities, there has been a 482% increase in use at familysearch.org among teenagers. A whole new generation is growing up intrigued by family history.

Family Trees: The database of names at FamilySearch.org continues to steadily grow with 1.2 billion unique names currently in the database. FamilySearch has expanded even further with partnerships with Ancestry, My Heritage, Find My Past and the New England Genealogical Society.

Searchable Records: Records are being digitized so they are searachable with, for example, 117 million names available from obituaries. Later this year millions of marriage and death records will be added from Mexico and Italy.

Memories: Every day people are loading in more memories into FamilySearch with currently over 10 million stories and photos logged there.

Contextual Help: A continual effort is made to improve the ability to give easy, intuitive help to the user of FamilySearch.

So Rootstech is on the cutting edge of the technology for family history, but more important is designed for the most ancient idea of all—turning our hearts to each other. Those who attend are seeking to be specialists of the heart.