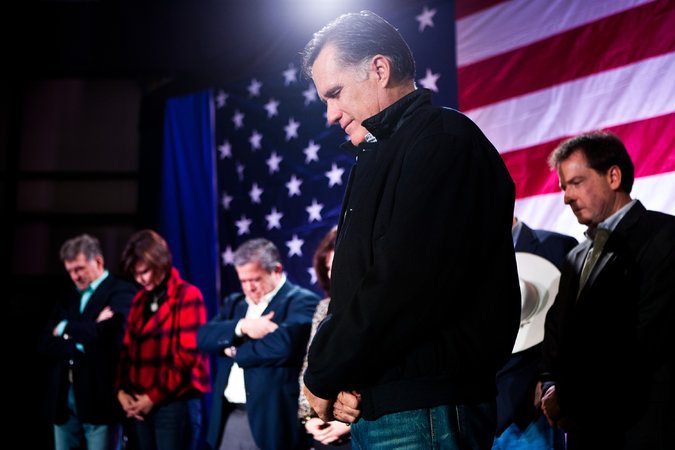 Romney’s Consideration of Candidacy Is Closely Tied to His Faith, Allies Say

The following is an excerpt from an article in the New York Times. To read the full article, click here.

A prominent Republican delivered a direct request toMitt Romney not long ago: He should make a third run for the presidency, not for vanity or redemption, but to answer a higher calling from his faith.

Believing that Mr. Romney, a former Mormon pastor, would be most receptive on these grounds, the Republican made the case that Mr. Romney had a duty to serve, and said Mr. Romney seemed to take his appeal under consideration.

Three years ago, Mr. Romney’s tortured approach to his religion — a strategy of awkward reluctance and studied avoidance that all but walled off a free-flowing discussion of his biography — helped doom his campaign. (The subject is still so sensitive that many, including the prominent Republican, would only discuss it on condition that they not be identified.)

But now as Mr. Romney mulls a new run for the White House, friends and allies said, his abiding Mormon faith is inextricably tied to his sense of service and patriotism, and a facet of his life that he is determined to embrace more openly in a possible third campaign.

Kirk Jowers, a Mormon family friend who lives in Utah and chaired Mr. Romney’s leadership PAC, said that Mr. Romney’s contemplation of a third bid is motivated by an “almost devout belief that he needs to do something for this country.”

But this time, Mr. Jowers said, Mr. Romney would treat his religion differently. “In 2008, Romney risked being a caricature of the Mormon candidate,” he said. “Now everyone seems to know everything about him, and that will be very liberating for him to talk about his faith.”

I view this as an attempt by the New York Times to be "fair and balanced". "Romneyconverted less than two dozen converts" -- Those that went to or sent their child to a European mission, know how low the numbers can be -- yet ... the NYT fails to draw the conclusion that it is the Holy Spirit that does the converting. Much was overblown with the buzz words of the day, "almost devout faith", "buttressed by his faith", and "animated by his religion", framing the picture to every liberal --- (while not calling the LDS faith a cult) that the church has progressed to a half-step cloer to being a recognized Christian church. They do not activelly even try to attemt to fully pursue any depth and rationally look at any religion. And -- Romneys "persistance .. is a natural extension of his faith. I guess Nixon, Regan, and even "What did I do wrong?" govenor Clintion all came back to become President. The NYT calls attention to a talk Romney had with Gordon B. Hinckley as something "strange", yet Nancy Pelosi meets with the Pope and it is heralded as front page news.

David Hall's comments are very childish, and obviously he has an ulterior agenda. It's McCarthyism all over again. Fortunately, Abe Lincoln didn't give up simply because he didn't win elections the first round; and, Hall should be praying that we get someone in there with some common sense, the ability to work across the aisle and moral sense of duty. By the way, Romney said he believes that some global warming is man made, but he wouldn't throw a lot of money at it. This is obviously the course of action to take---and should satisfy everyone except the most radical on both sides.