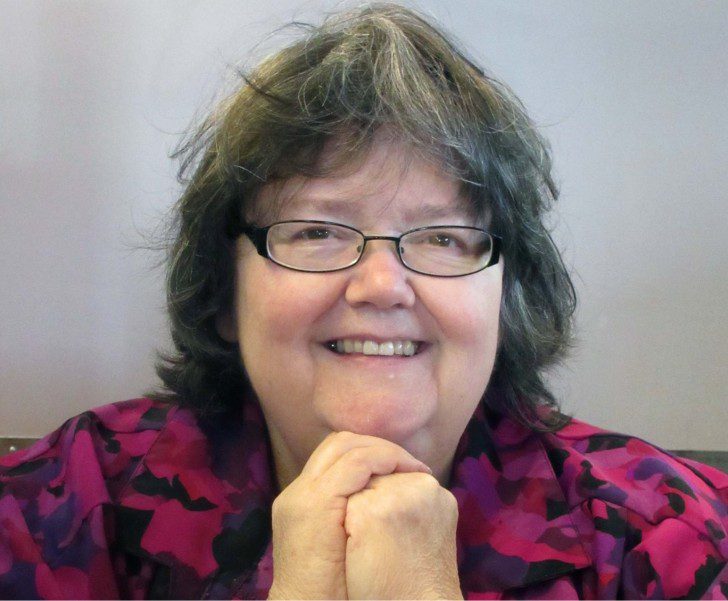 Kathryn H. Kidd, who was Meridian’s long-time associate editor and head of our most popular feature, Circle of Sisters, died in Virginia on December 15. We will miss her sorely. She was witty, dependable, spicy, self-deprecating, smart and called us all “sweet pea”, which was always so endearing. Her love story with her beloved husband, Clark, whom she called Fluffy is legendary.

She took her ill health in stride, poking people with her cane, laughing and joking with us through life’s hardest times. She knew how to start a conversation and keep it going. The questions she asked readers on Circle of Sisters carried on sometimes for weeks, with hundreds responding to her smart insights.

We can think of no better way to remember Kathy than to publish her last blog entry from Planet Kathy, written just hours before she died on Dec. 14. She speaks of having eternity to get where we are going in an ending to this article that reads very poignantly for all of us who now know she would soon leave this earth after she finished the article.

In Praise of Tortoises Everywhere

It’s that happy time of year when most of us are thinking about Christmas. I’m doing that quite often too, but as we enter December, I also realize that three years ago I was sleeping like the dead, and indeed the doctors and Fluffy had no idea whether I was ever going to re-enter the land of the living.

That was not a particularly enjoyable Christmas for the Kidd family. It was memorable, but not exactly a funfest.

When I finally did awaken, the doctor told Fluffy I would be in the ICU for a couple of days, and then in therapy for a couple of weeks. Then Fluffy could take me home and I would be good as new. Ha! Fluffy laughs and laughs about that, but the laugh is just a little bit bitter. Because here I am three years later, and there’s no “good as new” about it.

The person Fluffy brought home from the hospital was a different Kathy from the one who was taken to the hospital in the meat wagon. In some ways, I’m actually better. For one thing, I dropped about 100 pounds that I was happy to see go. I’m still not a lightweight by any means, mind you. But losing that hundred pounds was a red-letter event for me.

When I went into the coma, I had congestive heart failure and pulmonary hypertension. Both of those are fatal diseases, and I had already lived longer with them than most people do.

I spent years sucking oxygen out of a tube at home, and I only stopped doing it because I was afraid I was going to get caught in the tubing and fall down the stairs. I’m clumsy that way. My heart and my lungs were bad, and they were only going to get worse. But both diseases disappeared when I was in that coma. I came out of the hospital with a healthy heart and lungs.

My lungs are so good these days that when I was in the doctor’s office for a checkup last week, I noticed they were conducting a study that paid people $50 for a vial of their blood if they had any number of weird diseases. One of the diseases was COPD (chronic obstructive pulmonary disease), a disease I was first diagnosed with back in 1985. I’ve had that disease for two decades.

“There’s an easy way to make fifty bucks for Christmas,” I said.

My doctor listened to my chest. “Nope,” he said, in his flat Wisconsin Cheesehead accent. “You’ll have to find a different disease. “Your heart and your lungs are fine.”

So much for that extra cash for the Christmas season.

I came out of the hospital with that new set of lungs and that new, stronger heart. The trade-off for that is that I lost the ability to walk — at least temporarily. But “temporarily” has taken a long, long time.

In the past whole year, the only progress I have made is that I now do most of my getting around in church with Fluffy on one arm and a cane on the other. I say “most” because I can’t get through the outside double door that way, so Fluffy gets me through the outside doors in my wheelchair and then I start walking. But it is an improvement over the walker, which was what I was using last year at this time.

And the walker was a great improvement over the wheelchair that I used the year before that.

Frankly, I expected to make a whole lot more improvement than just graduating from a walker to a cane over the course of a whole year. But then, I was expecting my nerves were going to grow back a whole lot more than they have during a whole year’s period. They haven’t.

One doctor told me that nerves grow back at the rate of one-half inch to one inch per month. Okay, I figured, to get from my knees down to the bottoms of my feet would be up to 36 months, even if my nerves were in the slow-learner class. But I have learned that nerves follow their own calendar, and different sensations come back at different speeds.

There have been some new sensations (getting more unpleasant as we approach winter), which are that my feet always feel as though they are being assaulted by an Arctic wind. This is not something that makes me happy. I liked it lots better when they felt as though they were on fire, although that was an unpleasant sensation too.

I am sure my neurologist would call this progress. In fact, he says my recovery is right on track, so I know things are going well. But I am an impatient soul, and to be honest, Fluffy is considerably less patient than I am. It grates on both of us to see my recovery progressing at glacial speed.

Of course, both of us realize that the time may come when recovery may stop altogether. I have read several books about people who have been in comas, and sometimes their feet come back, and other times their feet do not. It all depends on what their feet want to do.

What I’ve read in the books is that people just find ways to work around their feet. Fluffy has hoped I would be climbing mountains by now. Frankly, I’ve had the same hopes. Both of us have been just a tad disappointed.

We hoped the day would never come when I would have to just give up and have to learn to walk on what feel like painful, icy stumps. But that day may come, and if it does, I’ll just have to smile and do it. Lots of people have worse challenges to overcome than that.

Matthew 5:48 gives us what seems like a daunting command, when Jesus says, “Be ye therefore perfect, even as your Father which is in heaven is perfect.” But even as we worry over the prospect of being perfect, we need to realize that there is no place in that scripture where Jesus tells us we have to be perfect now, or even this year, or even in this decade.

When Aesop wrote about the Tortoise and the Hare, the rabbit was not the hero of the tale. The rabbit was a lazy beast, who was so certain that he was going to win that he plopped down for a nap in the middle of the race. It was the pathetic, plodding tortoise who eventually won, solely because he was too stupid to know he had been beaten.

I may yet reach perfection, as may we all. After all, as long as we are going in the right direction, we have eternity to get there.

This article originally appeared in the Nauvoo Times.

Once again, Kathy has hit the nail directly on the head. When one is chronically ill one’s thoughts do indeed turn to time; to how illness has, seemingly, slowed down one’s progression. Or has it? With my own illness I see that, for me, the Lord has chosen to work on me in a different way than others who are enjoying health of their physical body. I do not begrudge Him the things I’ve learned during this period. I marvel instead at the different paths He takes each of us down. And I now see clearly how our health trials also create growth and progression in those who love us. I know that, in the place she now resides, Kathy is STILL collecting her thoughts with every intention to share them with others; to create hope, to create laughter, to create self-examination, as she has so beautifully done during her earth life here. Are books produced in the Spirit Realm? Maybe not in the form we’re used to; but I believe that knowledge and wisdom and faith, such as Kathy has developed, are highly sought after there. May the Lord bless Clark with all that he needs until he rejoins his sweetheart.

I first met Kathy in college at BYU, where she was a nonmember who chose BYU because she found out they didn't allow smoking there. At least that's what she told me. We were friends for the year and a half I attended the Y, and then a few years later, we met again in a singles ward in Salt Lake. I was surprised but not surprised that she had joined the church. And that's where she and Clark met. I knew them both and watched their romance develop. Now it's 40 years later, and I haven't seen either of them in all those years. But I found her book, Paradise Vue, early on and loved the way she shed comedic light on our Mormon foibles. Then, through her blog, I discovered just a few years ago how deep she ran underneath that funny personality. Her thoughtful essays on life, faith, and challenges were inspiring. I wanted so much to be able to see her again in person, but I guess that will have to wait until I cross over. My love to Clark and all the family and friends that Kathy left behind.