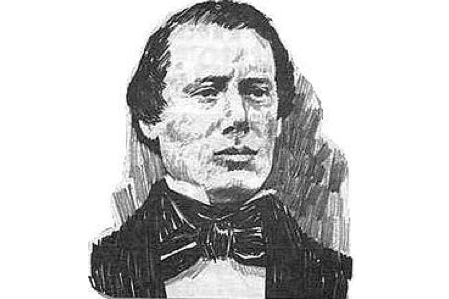 Editor’s Note: Samuel Smith was the younger brother to Joseph. Though his bond to his brothers is not as well-known and oft-remembered as the relationship between Hyrum and Joseph, Samuel Smith played kay roles in the restoration of the Church and he too lost his life not long after the martyrdom.

Samuel was the third person baptized in this dispensation, after Joseph and Oliver.

“Shortly after the baptism of Joseph Smith and Oliver Cowdery, Samuel Smith, a younger brother of the Prophet, went to visit him. No doubt he was anxious about his brother and had some misgivings in relation to his work. The Prophet writes: “We informed him of what the Lord was about to do for the children of men, and began to reason with him out of the Bible. We also showed him a part of the work which we had translated, and labored to persuade him concerning the Gospel of Jesus Christ, which was now about to be revealed in its fulness. He was not however, very easily convinced of these things, but after much inquiry and explanation, he retired to the woods, in order that by secret and fervent prayer he might obtain of a merciful God wisdom to enable him to judge for himself. The result was that he obtained revelation for himself sufficient to convince him of the truth of our assertions to him; and on the twenty-fifth day of the same month in which we had been baptized and ordained, Oliver Cowdery baptized him; and he returned to his father’s house, greatly glorifying and praising God, being filled with the Holy Spirit” (Joseph Fielding Smith, Church History and Modern Revelation, Vol 1, p.50, 51).

In addition to this honor, Samuel was one of the eight witnesses to the Book of Mormon. He was one of the six original members of the Church, and he was its first ordained missionary.

Samuel Harrison Smith was . . . set apart by the Prophet Joseph Smith, his brother. On June 30, 1830, he left on his mission with copies of the Book of Mormon filling his knapsack. After traveling 30 miles the first day he slept under an apple tree, having “been turned out of doors that day” for the fifth time. The next day he journeyed eight miles to Bloomington, New York, where he met John P. Greene, a Methodist preacher. Although Greene did not initially accept the Book of Mormon, he consented to take a book on his next preaching tour. Later Smith returned to the home of Reverend Greene. His persistence eventually led to the baptisms of John P. Greene, Brigham Young, and Heber C. Kimball.

“During the following 15 months Smith traveled over 4,000 miles, preaching from Maine to Missouri. He journeyed with Orson Pratt from New York to Kirtland, Ohio, a distance of 250 miles. By spring of 1831 he was preaching 50 miles west of Kirtland in Amherst. From June 1831 through August he preached with Reynolds Cahoon from Ohio to Missouri. The remainder of 1831 he served missions in eastern Ohio. He and Orson Hyde were called to the northern states on January 25, 1832. They journeyed from Salem, Ohio, to Springfield, Pennsylvania. They then walked to Erie, Pennsylvania, and continued north until they reached western New York. The missionaries also traveled to Boston and Providence, Rhode Island. Continuing north, they journeyed through New Hampshire to York County, Maine. During this 11-month mission Samuel Smith helped organize four branches of the Church” (Historical Atlas of Mormonism p.14).

Samuel came to believe in the restoration of the Kingdom of God, he came all the way. He was unflinchingly faithful to his testimony and the work.

“At the time of the martyrdom of his brothers, Joseph and Hyrum, he was living at Plymouth, in the eastern part of Hancock county, but frequently visited Nauvoo. Hearing of the arrest of his brothers and their imprisonment at Carthage, he immediately went to the latter place, but only to find that the martyr’s fate had already overtaken them, and in sadness he accompanied their bodies to Nauvoo. He survived them but a few weeks, his death being produced by a severe billious fever, doubtless brought on by physical and mental strain produced by the sudden death of his brothers” (B. H. Roberts, New Witnesses for God, Vol.2, p.332).

Samuel Harrison Smith died on July 30, 1844, just 33 days after the death of his older brothers in Carthage.

Some recent reading provided another glimpse into the unity of Samuel with his more famous and martyred brothers.

“was not quite six years old at the time of the martyrdom. David related: ‘I remember that my father used to say he could remember when his father came in excitedly and said he had to go in a hurry. He was on his way to Carthage and Father said he watched him go down the lane on his horse as fast as he could go.’ On the way to Carthage to assist his brothers, Samuel H. was waylaid by the mob, which intended to get rid of the entire Smith family in its effort to suppress Mormonism. They shot at him, one bullet going through his hat and another through his sleeve, but neither hitting him. Despite this miraculous preservation, he died just a few weeks after the martyrdom from internal injuries first suffered in a farm accident but severely aggravated during his escape from the mob.”

The death of Samuel was a fulfillment of a dream related by Joseph Smith a short time before his final journey to Carthage. The dream is further evidence of Joseph’s prophetic power, but also a quiet witness of the love of these three brothers and the closeness of the family.

“David recalls, ‘I remember when I was quite young Father said that the last dream the Prophet had before he died was that he was going in a boat and they were just pushing out from shore, he and Hyrum. And Samuel came and called to them to wait for him. And so they waited for him to get on’ (Janice Clark, “Permanent Missionaries,” Ensign, Aug. 1975, 13).

Samuel Smith was also the patriarch for a short time. One of my ancestors received a patriarchal blessing from him; s copy of the hand-written blessing is in familysearch.

Sister Christensen and Sister Lau, thank you for your comments and observations. I went back to the original article and re-read it and you are correct. It was David's father who was six at the time of the martyrdom. I apologize for my sloppy research.